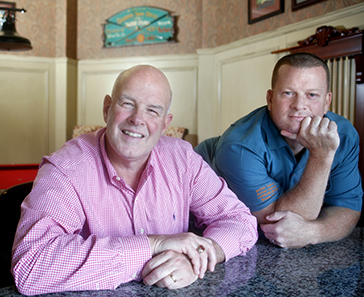 Lance Shaner was in Buffalo several months ago for what he thought was simply the opening of the new Buffalo Marriott HarborCenter hotel that his company — the Shaner Hotel Group — had been contracted to operate and manage.
While there, however, Shaner learned the owner of the hotel, his longtime friend and owner of the Buffalo Sabres hockey team Terry Pegula, had arranged for the founder of a project called Operation Backbone to give a presentation on the program.
That was when Shaner learned that the nonprofit organization was helping veterans with debilitating spinal and brain injuries receive specialized treatment at centers around the country.
“I didn’t know there were thousands of American soldiers with spinal and brain injuries that the Veterans Administration hospitals aren’t equipped to treat,” says Shaner, 61, a part-time resident of Royal Palm Yacht & Country Club in Boca Raton. “These people aren’t getting the care and support they deserve.”
Shaner has partnered with the Sabres and Pegula, along with a few others, to help make it possible for Operation Backbone to provide surgical treatments to dozens of the most severely wounded veterans, many in intense pain and on the verge of giving up.
In addition to financial support, Shaner has offered his corporate jet to transport ailing veterans whose injuries make it impossible for them to fly commercially.
“I told them whenever you need my plane you can have it,” Shaner said.
Operation Backbone, which receives many patient referrals from the military, works with treatment centers in cities such as Tampa, Buffalo, Houston, San Diego and also at Johns Hopkins Medical Center in Maryland. It also works with a neurosurgery center in Boston, where it partners with the Boston Bruins hockey team and CEO Charlie Jacobs.
Shaner also agreed to let Operation Backbone veterans traveling for treatment stay in any of more than 48 hotels his company has ownership in or manages — including the new Fairfield Inn & Suites in Delray Beach and several others throughout Florida — at no cost.
He also used his connections to help veterans get rooms in Marriott hotels — not owned by his group — near treatment facilities.
Shaner tells the story of a veteran identified only as “the colonel” who was flown to treatment on the corporate jet and whose treatment was successful.
“When you can experience a veteran in intense pain and you fly the man to treatment and then a month later see that same soldier saying he’s pain-free and ‘you saved my life’ — it doesn’t get any better than that,” Shaner said.
Shaner, who also operates Shaner Capital, an investment business that helps small businesses grow, is not new to philanthropy. He’s funded a cancer treatment center and also an Easter Seals child development center, both in State College, Pa., where he spends summers.
“I’ve been fortunate in business where I can make a difference,” he said. “With Operation Backbone, you can see it so clearly.”
Mike Sformo, Operation Backbone’s founder, says that in addition to financial support, Shaner and Pegula help raise awareness so veterans and their families know there is help available to those suffering with severe brain and spinal injuries.
Shaner said that he and Sformo are studying the feasibility of placing information about the program in all 5,000 rooms in hotels owned or managed by the Shaner Hotel Group.
Sformo says Shaner also helps provide him with business knowledge and guidance that is invaluable.
“The most important thing is to find people who know how to do this better than I do,” he said. “It’s good to know they have faith and trust in the program.”

To find out more about how you can help, visit www.operationbackbone.org.