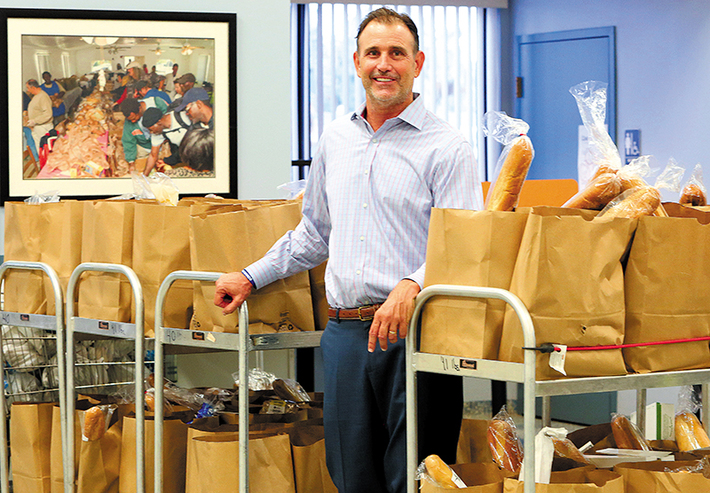 Steve King, director of development at Boca Helping Hands since September, started out with the organization by distributing bags of groceries to people in need. Tim Stepien/The Coastal Star

After retiring from his first career at Bank of America and Comerica in Boca Raton and working in Lynn University’s Office of Development, Boca Raton resident and Miami native Steve King says he has found his true calling.
Appointed as director of development at the nonprofit Boca Helping Hands in September, King is combining his expertise in fundraising, community service and engagement and doing good at the same time.
“For the first time, I’m doing something that I believe in and feel wonderful about every day,” says King, 55.
“There’s nothing I don’t enjoy,” he says. “I’m very privileged seeing the people we’re helping and hope to keep going until I’m 80.”
In volunteering for the organization since 2012, King and his family served food and distributed pantry bags as a way to become more active in the community.
“Engaging with clients was so rewarding that I look forward to making a greater impact in my current capacity by creating stronger community partnerships and enhancing programs,” King says.
Boca Helping Hands provides food, medical and financial assistance as well as education, job training and guidance to foster client self-sufficiency.
The organization assists more than 27,000 people annually and distributes more than 80,000 pantry bags at five Palm Beach County locations, serving 90,000 hot meals annually, six days per week.
In addition, the group offers access to affordable medical, dental and behavioral care through its partnerships with Genesis Community Health and FAU’s Christine E. Lynn College of Nursing community-based clinics.
When the coronavirus pandemic struck in March 2020, King served up to 300 lunches each day and assembled and distributed as many pantry bags.
“My job is to engage with the public, meet donors, do outreach and attend events,” King says. “We want to meet donors where they are and not wait for them to come to us.”
This past Thanksgiving, BHH fed approximately 3,000 families in the county.
“You can see our donors’ joy when they drop off food for Thanksgiving labeled ‘from my family to your family,’” he says.
King credits the organization’s top three sponsors — Boca Raton’s ADT, Phoenix Tower International and Boca Raton’s Robert and Anita Kriensky.
“We couldn’t have done it without them,” he says.
As a child, King admired his parents — both public school teachers. His mother was a special ed teacher and his dad taught homebound kids.
“Both my parents would give you the shirt off their back,” he says.
King’s mother died last year at the age of 86, in a nursing home. Because of the pandemic, King was unable to visit and feels a lasting sadness.
“I’d love to be able to hug her and thank her and share one more Thanksgiving,” he says.
They made him the person he is today, he says.
“I want to leave my mark and make a difference,” King says. “I love Boca Raton and want to create meaningful change.”
He enjoys living in Boca Raton and says: “This city offers everything. It’s paradise.”
He moved to Boca in 1986.
“The people are wonderful,” says King. “We have a top-notch hospital, museum and two universities, beautiful beaches and parks. From education to the outdoors, from arts to sports to a variety of restaurants, there are so many amenities. I go to the beach every weekend and either read or paddleboard.”
King met his wife, Ann-Louise, at Lynn University on the first day of school in 1987. She’d arrived from Sweden to play tennis for Lynn University, then known as the College of Boca Raton.
“I carried her bags from the car,” he recalls. “I remember she didn’t thank me. I learned later she was hot, exhausted — and overwhelmed by travel. Obviously, I’ve done something right — we’ve been married 30 years and have two adult children.”
Despite what F. Scott Fitzgerald said — “There are no second acts in American life” — King seems to be excelling in his.
“My job is extremely fulfilling,” he says. “It’s very gratifying to make an impact. Boca Helping Hands is a very enjoyable place. Even on a bad day here we’re helping someone and making sure they’re having a good day.”