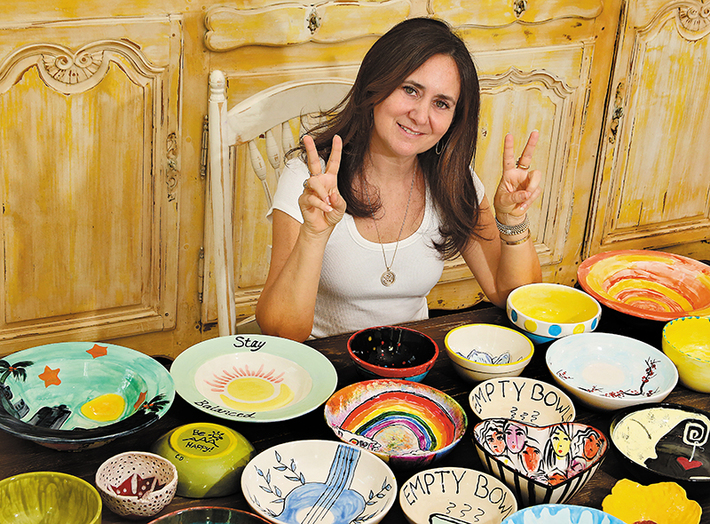 Stephanie Dodge of Delray Beach has been part of all five Empty Bowls fundraisers and has amassed quite a collection of bowls. Tim Stepien/The Coastal Star

When the Delray Beach Empty Bowls program needed some creative thinking, it couldn’t have picked a better chairwoman than Stephanie Dodge.
“I grew up with a hippie globe-trotting mother, so I changed schools 17 times as a kid,” said Dodge, who along with honorary chairman John Brewer is organizing the fifth annual Empty Bowls program Dec. 5 at Trinity Lutheran Church.
“There were three of us (children), and wherever her heart went we would follow,” Dodge said about her mother, Grace Divine, and the family’s frequent moves.
In its previous four years, Empty Bowls created a picnic-like atmosphere at Old School Square, with local celebrities serving up an offering of soup, bread and water to hundreds.
With the COVID-19 pandemic making that impossible this year, Dodge and her 10-member committee will go a different route.
“It’s going to be a drive-thru experience with all the CDC regulations in place,” she said last month. “The soup is already prepared and packaged. We’re trying to keep it somewhat the same, where there will be celebrity community leaders serving the soup. As you drive through we’ll have your favorite orthodontist, principals of the school, people like that, handing out the soup.”
The fundraiser benefits the Palm Beach County Food Bank, which as a result of the pandemic’s hardships has been busier than ever this year.
“The need is twofold compared to other years,” said Dodge, who lives in Delray Beach. “The Food Bank in the past was (distributing) a million pounds of food a month, and now it’s doing 2 million.
“We’re hoping that because the need is greater, people will come out of the woodwork and support this event, even though we’ve had to reinvent the wheel. We’re keeping our fingers crossed that it’s going to be heavily supported.”
Dodge said her involvement in Empty Bowls is largely a tribute to Billy and Shelly Himmelrich, the owners of Old School Bakery who brought the program to Delray.
“They spearheaded this whole thing five, six years ago,” Dodge said. “Whatever they do, they seem to have the Midas touch that always turns to gold. I’m happy to participate in any fundraiser that they ignite, and I pay homage to them.”
Patty Jones, who chaired the 2018 event and is a member of the Empty Bowls executive committee, said her high expectations are largely due to the work Dodge and Brewer have put in.
“She brought new ideas, pretty much a fresh start,” Jones said. “She’s the leader and we look to her. It’s a little different but it’s going to be a great success.”
Brewer, who founded the Delray Socially Distanced Supper Club and has a close relationship with many of the 30 or more participating restaurants, has played an important role.
“Because of his connection to the community he’s been invaluable,” Dodge said. “He’s been an inspirational force for all the restaurants in town, keeping them connected and keeping them busy: curbside pickup, drive-by, delivery.”
Trinity Lutheran School principal Jamie Wagner has also been a huge asset.
“When COVID started they did a drive-thru feeding a lot of people in Delray,” Dodge said. “So they had the blueprint of how the traffic flow will work out.”
Participants are asked to go to www.pbcfoodbank.org/emptybowlsdelray and make a reservation in one of the four hour-long time slots between 11 a.m. and 3 p.m. Dec. 5. Cost is $30 for one order or $50 for two. Choices of soups include clam chowder, chicken and vegetable.
Former local news anchor Suzanne Boyd will host a program on site that will broadcast on Facebook and YouTube from noon to 1 p.m.
A yoga teacher for 30 years, Dodge opened Boca Raton’s first yoga studio, Boca Yoga, in 1996. She opened the city’s first health food sandwich shop and juice bar at age 18. She now teaches two yoga classes a week by Zoom on the platform iYoga and enjoys that “new normal” so much she doesn’t envision working out of a studio again.
Dodge, a stay-at-home mom for much of the past 20 years to sons Connor, 20, a sophomore at the University of Colorado, and James, 16, a junior at American Heritage, said her life experiences have made her stronger.
Students from American Heritage will assist with Empty Bowls distribution and other schools are invited to participate.