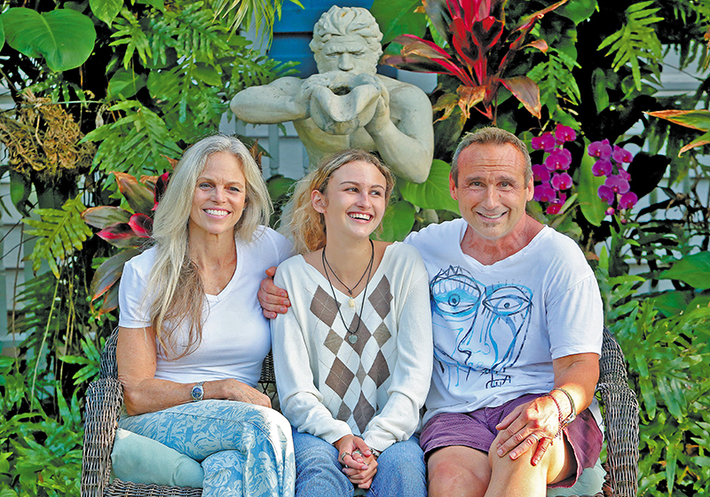 Liz Bold, her daughter Capri, 14, and her husband, Bill, at their Delray Beach home. The mother and daughter spotted three runaway boys on State Road A1A in Delray in January, and the family fed, clothed and comforted them for a few hours before police returned the youths to the Children’s Place at Home Safe in Boca Raton. Tim Stepien/The Coastal Star

Call it a mother’s intuition. On a late Sunday afternoon in January, Liz Bold and her daughter Capri, 14, were walking south on A1A, a few blocks from their home in Delray Beach, when they passed three young boys on a bench.
“I noticed there were no adults near them,” Bold said. The boys then began walking north beside the busy road.
“They were clearly too young, in my opinion, to be walking on A1A with no adults. So I said to Capri, ‘Let’s turn around, I want to follow them.”’
Unknown to Bold, the trio had taken off from the Children’s Place at Home Safe in Boca Raton earlier that day. That’s a place for the care and treatment of abused, neglected and abandoned children.
Boca Raton police issued an alert to other police agencies along with photos of the boys. But here they were in Delray Beach, about 5 miles away.
When Bold and her daughter caught up to the boys, she began chatting with them. “The youngest one blurted out, ‘We don’t have anywhere to go tonight. We’re homeless,’” Bold recalled.
They confessed that they had run away, saying they were unhappy with how they were treated by Home Safe staff.
What ensued was a family drama of compassion, generosity and ultimately frustration at being unable to do more for three runaways, ages 9 to 12.
“I realized … they probably were hungry, so we went over to BurgerFi … and I brought my husband in to try and formulate a plan,” Bold said.
Bill Bold arrived and found his wife buying burgers and milkshakes for the boys.
“We were thinking maybe we should bring them back to our house,” Bill said. The boys advised against that, worried that he might be accused of kidnapping. “They were street smart,” he said.
One boy provided Bill with his mom’s phone number, so he called her, but she could not have cared less. “She gave me the name of a social worker,” he said.
After several more phone calls, it was clear his only option was to call police. Reluctantly, he did.
“We didn’t know what else to do. We didn’t want to leave them on the side of the road.”
Bill gave his phone number to the boys, and he and Liz assured them they wanted to remain in their lives. The boys were dressed poorly, so the Bolds took them to a nearby store and bought them flip-flops and clothing items while they awaited police.
“The lady in the store started crying too. I think she gave us a good discount because we told her what was going on. Everybody was pitching in,” Bill said.
When Delray Beach police arrived, it had been about four hours since the boys left Home Safe.
“They were really nice guys,” Bill said of the officers.
As the boys were about to be driven back to Boca Raton, “they all asked us for hugs,” Bill said.
“My daughter and I were bawling after the police took them away,” Liz added.
The Bolds — who have four children — never heard again from the boys. For weeks, they tried to figure out how they could see them again for a movie or a dinner.
But no programs were in place that permitted this, and the coronavirus pandemic made it out of the question anyway, they were told.
“We told them we were going to stay in their lives. I have so much guilt right now about that,” Liz said.
“They were charismatic kids,” her husband added. “They were excited about life, but they were also troubled. It was just heartbreaking, the entire situation.”
He’d “love to mentor them or be in their lives, if there is some creative way.”
The Delray Beach Police Department praised the Bolds for their actions, but the couple insist they did nothing special.
“I think it’s what is expected of us as human beings,” Liz said, “just to help our fellow human beings.”