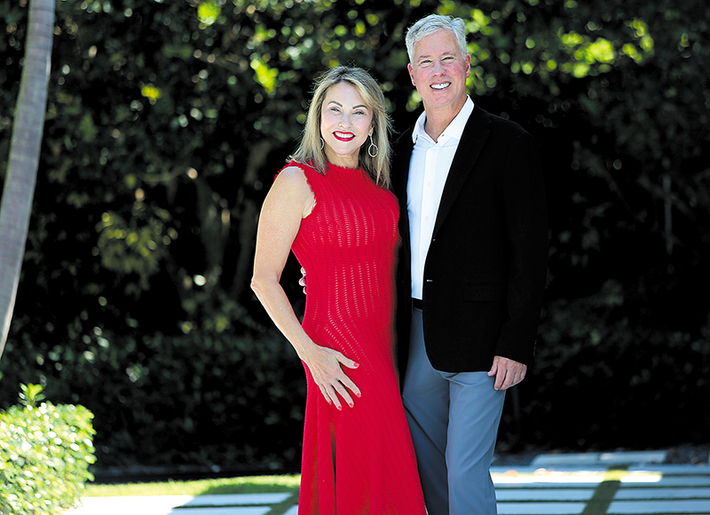 Raised by a single mother and working to support her when she became ill, Daniel Bencivenga was not a likely candidate to have an opportunity to further his education — despite his exemplary academic performance at Spanish River High School in 2016.
The Eda and Cliff Viner Community Scholars Foundation changed that. And six years later, Bencivenga is on track to earn his law degree from the University of Florida next spring.
“The Viner Foundation has played a huge role in my life and I am not sure where I would be without them,” Bencivenga wrote in an email.
When Eda and Cliff Viner of Gulf Stream were married in 2015, they decided to start a foundation to offer educational opportunities for economically challenged students.
“He used to send kids to camp,” said Eda, 62, “and I felt my kids had never been to camps and they turned out fine. But without a college degree in today’s world, it’s hard to survive. I thought that would be a better cause for the community, so we decided we would send 100 kids to college at a time.”
The couple settled on 10 high schools in south Palm Beach County and reached out to guidance counselors and other school staff to spread the news.
“We wanted to pick kids who were going to go to school in Florida,” said Cliff, 73. “For two reasons: One, our money goes further than if they went to someplace like Harvard, and two, these kids are more than likely to come back and serve the community.”
The qualifications are not easy: Students must maintain at least a 3.0 grade-point average — the Viners say qualifiers average about 3.6 — and have more than 300 hours of community service by the time they graduate high school.
The Viners’ initial class in 2015 had only 18 students, but they now receive more than 100 applicants every year and have 130 in the program. The top 50 applicants are selected each year, whereupon the Viners interview them — and often their parents — before paring the number to about 30.
“Our community is a melting pot, so we want to help everybody,” Cliff said. “Good grades and need are important, but we want to see character, because character is something you cannot teach.”
Each student selected is paired with a mentor, typically a community leader who will monitor the student’s progress throughout the college years and beyond.
“At first we just asked our friends to be mentors,” Eda said, “but as time has gone by, the community has really gotten involved. The Rotary of Boca Raton has gotten us at least 20 mentors and interviewers every year. Then we bring the kids and distribute food to the needy at Christmas. So, we help each other.”
The Viners said Rotary had a scholarship program but wasn’t tracking its recipients the way their program does. So, they joined forces. Similarly, Boca West had a Cribs to College program but didn’t have the college element. So Boca West has also signed on.
“The way you get them to graduate is to monitor them every step of the way,” Eda said. “That doesn’t stop until the day they graduate.”
The total outlay for the program surpassed $800,000 this year, not a penny of which goes to administrative costs. Niki Knopf, Cliff’s daughter, is executive director of the foundation and Eda, who spent eight years on the board of the Florence Fuller Foundation, resigned that post in December to help ease Knopf’s workload.
The investment in each student is more than monetary.
“We also have a social services program,” Cliff said, “with doctors, counseling, legal services, dentists. If the student or their family needs things, they don’t run off the tracks.
“Many times with students like this a family emergency arises and the kid will have to leave school and come home to take care of it. We make sure that doesn’t happen.”
Atlantic High in Delray Beach, where more than half the students come from families living at or below the poverty line, has had the most students in the program, with Boca Raton High next.
Other affiliated schools are American Heritage, Spanish River, Olympic Heights, Donna Klein Jewish Academy, Katz Yeshiva, Saint John Paul II, Village Academy and West Boca.
“If a kid is so extraordinary that they can go to Harvard, they’re going to be OK,” Eda said. “But there’s so many that do well but they’re not Mensa material, and they don’t have the money to go any further. Those are the kids we want to help. All they need is money and opportunity.”
Of the 130 students now in the program, about 50 attend the University of Florida, with lesser numbers at Florida State, Central Florida, Florida Atlantic and Florida International.
“We partner on a lot of students with the Florida Prepaid College Foundation,” Cliff said. “They have hundreds of kids they want to find matches for. We’re matching for them but they also match for us. They have 40 to 50 of our kids.”
While the program produced its first college graduates in 2019, many of the students have continued their education into careers such as law, medicine and engineering.
Cliff Viner, who was a partner in the NHL’s Florida Panthers, 2003-13, and served as general partner from 2008 to 2013, and Eda have four children: Niki, Eric, Amanda and Elyse Cromer.
The foundation will hold its annual fundraiser on Jan. 28 at the Signature Flight Support hangar at Boca Raton Airport.
For more information, see vinerscholars.org.