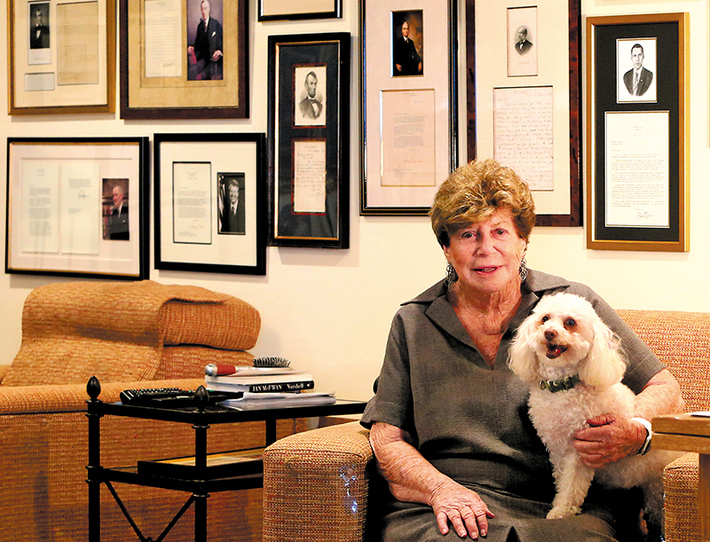 Charna Larkin and her poodle, Gigi, sit in front of framed images, letters and signatures from American presidents. Her late husband, Alan, loved history and the family has amassed a letters collection from every U.S. president from Washington to Biden. Tim Stepien/The Coastal Star

For longtime Boca Raton resident Charna Larkin, who turns 94 this month, doing good comes naturally.
Both Larkin and her late husband, Alan, were the children of Russian Jewish immigrants and she remembers life was not always easy, but the practice of tzedakah (charity) was instilled at an early age.
One of her latest good deeds was a grand one. In June, she donated $1.6 million to Florida Atlantic University to support student scholarships and establish the American Presidential Study.
The donation establishes the Alan B. and Charna Larkin Student Opportunity Fund within FAU’s Dorothy F. Schmidt College of Arts and Letters.
“We’ve been coming to Boca Raton from Newton, Massachusetts, since 1988 when our children were still young,” Larkin said, recalling family vacations. She enrolled in FAU’s continuing education classes and says, “I was impressed by the faculty and their vision and saw a great fit for us.”
This donation is in addition to a $617,000 gift from Larkin to construct and name the Alan B. and Charna Larkin American Presidential Study on the third floor of the S.E. Wimberly Library. The space will house the family’s letters collection, making it available to a wide audience.
Among the items are letters signed by all 45 American presidents from George Washington to Joe Biden.
“Charna’s philanthropic vision elevates the profile of our college and university while providing students access to the historical record of the American presidency and to the financial support to pursue their studies in the arts, humanities and social sciences,” said Michael J. Horswell, dean of the College of Arts and Letters.
History was a passion for Alan Larkin, but his claim to fame was as founder of the Larkin Group with his brother Harold. It grew into the largest producer of fashion trade shows in the country, hosting events at Lincoln Center and the Javits Center in New York City during the Woodstock era.
“It was hysterical and fun,” Charna Larkin recalled. She worked there after she graduated from college later than usual, and the couple had three sons. “It was a true family business.”
“Alan was interested in the American presidency,” Larkin says. “It began as a hobby, but as Alan acquired more of the letters, it became too intriguing not to pursue.
“We realized what a unique resource he had.”
Larkin says her intention with the donation was to honor her husband, who died after a fall in 2002 at age 80.
“Now we feel that the whole Larkin family shares in this legacy,” she said. “It’s inspiring to see people of all ages and walks of life participate in the Larkin Presidential Symposium.”
Her favorite letter is a thank you written by Harry S Truman to the Anti-Defamation League, after it acknowledged him for recognizing the State of Israel in 1948. In later years Alan Larkin was active in the ADL and its parent group B’nai B’rith.
“I’m happy that I’ve been able to continue collecting letters since Alan’s passing,” says Larkin. “Both George W. Bush and Donald J. Trump wrote personal letters to Alan after hearing about his collection,” and Biden followed suit this past spring.
“There is something inspiring about seeing all the Founding Fathers autographed letters represented,” she says, noting that it will be a legacy for her sons and six grandchildren.
“I take pleasure in our family,” says Larkin. “All our children and grandchildren are good people. They take pride in this collection and are as excited as I am that we found FAU as stewards for the collection.”
Her advice for future donors? “Start early and get in the habit of giving. Assemble assets and personal interests. Find ways to give back to the organizations you care about.”
“We found a way to succeed,” Larkin says. “We are grateful for the life this country gave us. The surprise is that I am still here and life is more interesting than ever.”