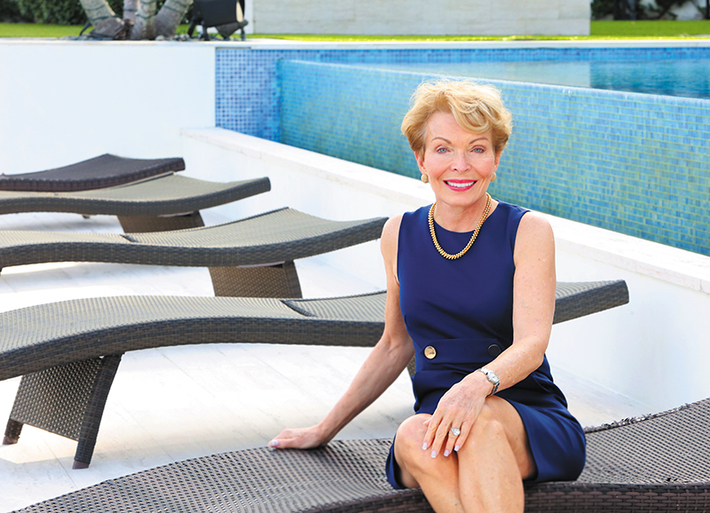 Rebecca Scott has joined the board of directors of Impact 100 Palm Beach County as the group considers 25 semifinalists for $100,000 grants in 2021. Tim Stepien/The Coastal Star

Scott, who has devoted decades of her life to giving back, was recently named to the board of directors of Impact 100 Palm Beach County. The nonprofit organization awards $100,000 grants to nonprofits in southern Palm Beach County for impactful projects that can change lives.

“It allows them to dream big and do something completely different from what they ever imagined,” said Scott, who lives in eastern Boca Raton. “We are excited to be able to give more away because the organization can do so much more with the entire $100,000.”

Scott has always been generous when it comes to giving of her time. She volunteered for years at her children’s school, spent 15 years as a group leader at her church, and served 10 years with Impact 100 as a dedicated member, hosting numerous events before she was named to the board.

She believes participating in the women’s nonprofit as a member is as beneficial to the participants as it is to the grant recipients.

“I think the growth that occurs in the women involved as they pool not only their financial resources but their resources of time and talent creates this wonderful gift to the community,” Scott said. “I am very committed to it.”

Originally from North Carolina, Scott earned a bachelor of science degree from the University of North Carolina at Greensboro, then attended Duke University Medical Center’s anesthesia program for nurses, where she met her husband, Steven Scott, a medical doctor.

She worked several years as a nurse anesthetist before devoting her life to full-time motherhood. The result? Five grown children, six grandchildren and a lifelong commitment to community service.

And that’s just one year.

In a decade, Impact 100 has contributed more than $3.8 million in grants to local nonprofit efforts in arts, culture and historic preservation; education; environment and animal welfare; family, and health and wellness.

The organization’s membership has grown to more than 500 members, a number Scott is hoping to raise to 600. Expanding membership is key to the group’s ability to award large grants.

Here’s why: Each member donates $1,000 annually to the grant pool, which is then divided up among top applicants. Five hundred members translates into $500,000 in grant money. And so on.

“It makes a smaller gift become so much more transformative,” Scott, who is in her 60s, explained. “I enjoy it very much. That is why I continued to be involved. My husband and I have always been interested in philanthropy.”

“We are so thrilled to have Becky join our board of directors,” said Adkins, president of Impact 100 PBC. “She has been a dedicated Impact 100 PBC member for many years and brings a wealth of experience and insight from her previous volunteer roles. Becky is a tremendous asset to our organization and we are grateful for her commitment to furthering our mission.”

Scott noted that many are responsible for the organization’s success: “The engine behind the success of this chapter has been the founding members and the fact that they have continued to stay involved for all of these years,” Scott said. “It is completely driven by volunteers.”