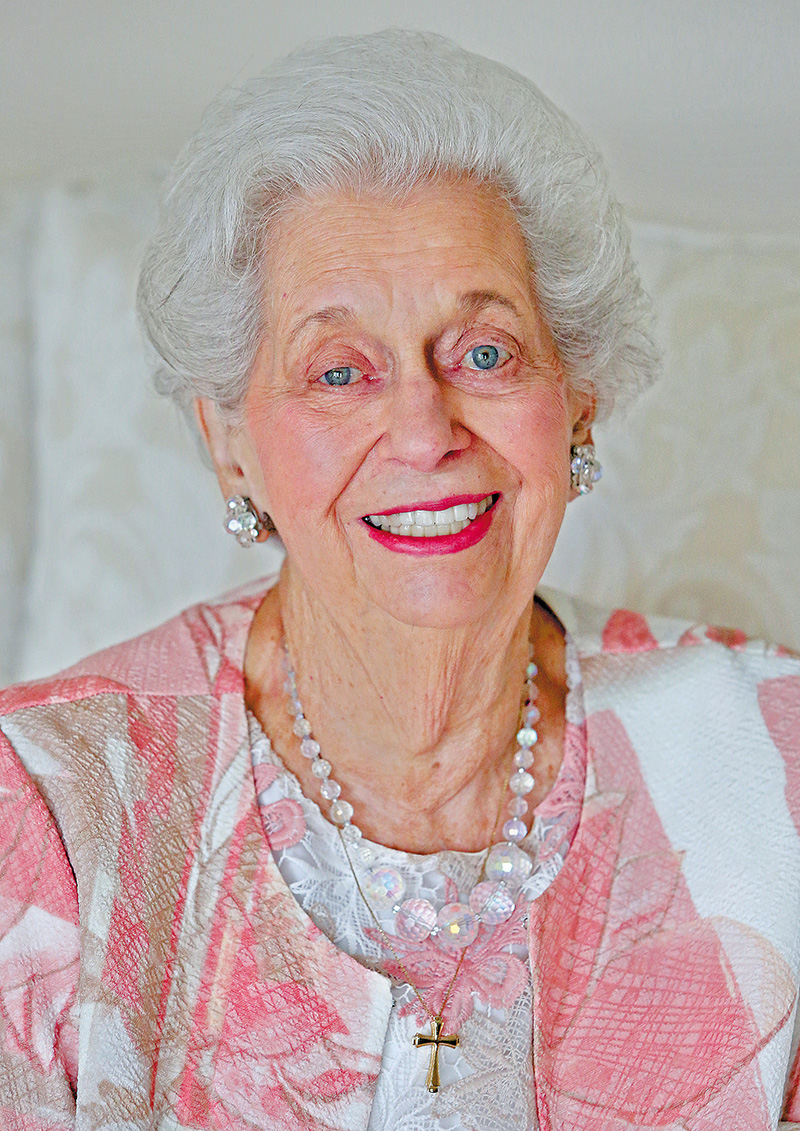 Helen Babione has spent nearly 60 years in Boca Raton, reaching out to help people through her church, community organizations and the Babione-Kraeer Funeral Home that her husband, now deceased, had founded.
Babione, 90, was recently honored with a Lifetime Achievement Award at the annual Women of Distinction Breakfast of Soroptimist International Boca Raton/Deerfield Beach. She has been a member of the Soroptimists for about 50 years — the same for both the Boca Raton Woman’s Club and Debbie-Rand Memorial Service League.
“I’ve been very blessed by having good friends who help me out,” Babione said. “I don’t do much. I get all the credit — my friends do all the work. And that’s the truth.”
The list of organizations and programs where she has made an impact is long, including the Rotary, Kiwanis and the Caridad Center. She is a founding member of Horses and the Handicapped and Twin Palms Center for the Disabled, and has often co-chaired the Go Pink Luncheon at Boca Raton Regional Hospital. She’s also active in programs with her church, St. Joan of Arc.
“I like to work with children and people who need real help,” Babione said, as well as with older people.
She added that working within a club, “you can get so much more done and don’t have the attention on yourself.” But that doesn’t mean she’s escaped the spotlight: “People give me attention all the time. They spoil me,” Babione said.
She also thinks it’s important for everybody to do something to help, pointing out that she’s not wealthy, nor do you have to be wealthy to give. “Somebody told me years ago: The small money we need to keep the toilet running. The big money we need for the buildings,” Babione said.
Babione’s late husband, Robert, was born in Lake Worth. Helen, who lived in Ohio, would travel to Lake Worth for part of the year to live with her brother, who had moved here for health reasons, and to waitress at a local eatery. There, she met Robert, who made deliveries to the restaurant. Helen came down permanently from Ohio in the late 1940s. “I feel more like a Florida person than an Ohio person,” she says. The couple spent some time in Washington when Robert was in the service, and in Texas where he went to school to become a funeral director. They moved back to Lake Worth, Robert started the funeral home in Boca Raton, and in 1960, they settled in Boca.
They had seven children: Kathryn Babione Rogers, Phyllis Babione Haggerty and Ashley, Paul and Jean Babione. Two of their grown children, Robert Jr. and Mary Babione Veccia, have passed away. Helen has a total of 23 grandchildren and great-grandchildren. Her entire family, with the exception of one grandchild, lives in Palm Beach County.
Today, Helen is a consultant at the funeral home and stops by often, especially to greet and grieve with people she knows and introduce them to the funeral director. “I still enjoy helping the people. I feel like it helps them, and if it helps them, I want to be there to do it.”
Keeping busy at charitable work in addition to helping at the funeral home is a plus for Babione, as well as those she supports. “I’ve been very fortunate as far as I’m concerned. I really appreciate doing it, too. It keeps my mind going better. It keeps me happier to know different people,” she said.
With the length of time she has been in Boca Raton, Babione mentions that she is “blessed to know a lot of different types of people.”
What she has also learned from meeting so many: “Everybody has a gift. No matter who they are, they have their own personal gift that I enjoy getting to know.”

NOMINATE SOMEONE TO BE
A COASTAL STAR
Send a note to news@thecoastalstar.com or call 337-1553.