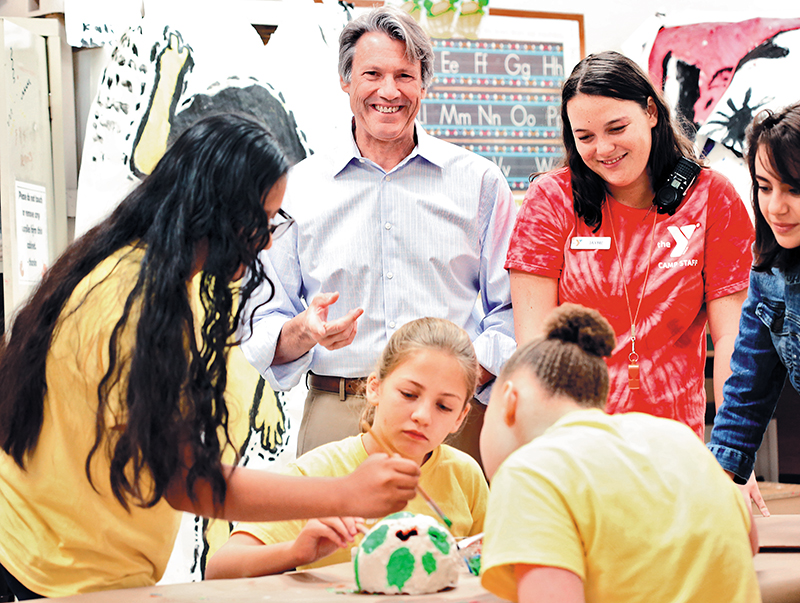 Rich Mascolo watches activities at the YMCA in Boynton Beach. He raised money so children from the Caridad Center could continue to attend a Y camp free. Tim Stepien/The Coastal Star

Lifting children who could use a helping hand is in Rich Mascolo’s DNA.
The son of two successful educators who recognized the potential in every child, and the nephew of an aunt and uncle who worked as teachers, Mascolo strayed from the “family business” and found success in advertising and marketing in New York.
Still, Mascolo, who lives in Ocean Ridge, couldn’t fully escape the calling that runs through the family bloodline.
Mascolo, who is on the board of the YMCA of South Palm Beach County, learned that a decade-long program that sends more than 80 children served by the Caridad Center — the largest free clinic in Florida — to the Y’s summer camp for free was in financial jeopardy. A major funder pulled out unexpectedly, leaving a gap of more than $25,000.
“Suddenly a significant number of kids were uncovered,” Mascolo said.
Determined to ensure all the children got to camp, Mascolo reached out to friends, family and associates to ask for contributions.
In the end, enough money was raised to avoid disrupting the 10-week Caridad YMCA camp at the Boynton branch.
“I just told the story,” Mascolo said.
An important part of that story is that a few years ago half of the children who had come to the camp had gone on to college.
“I was always taken with how successful the program was,” Mascolo said.
Children from the Caridad Center who attend the camp, many from families living below or near the federal poverty line, get the typical summer camp experience plus tips for healthy living and exposure to an academic element that includes math, science and the arts.
Mascolo, who says most of the contributions were in the $1,000 or $2,000 range, raised the bulk of the needed money in less than two months.
““It happened quickly because the cause is human, tangible and compelling ... and our pals have big hearts,” he said.
Mascolo’s devotion to the program for Caridad Center campers was the key to his success, says Barry Davis, executive director of the Y’s Boynton branch.
“You could see the passion and how much the program meant to him,” Davis said. “People just came up to him and said, ‘How can I help?’ ”
Mascolo, 63, and his wife, Bebe, became members of the YMCA in 2007, when they were still part-time residents, and saw firsthand the impact it had on the community.
“We got to know the Y,” he said. “We got a close-up look at what they were doing and we were knocked out.”
Mascolo said he and Bebe had no idea that the YMCA was a nonprofit organization and they didn’t know that it’s the Y’s policy never to turn anyone away who can’t afford to join.
“Once we understood that, we got involved,” he said.
First stop for Mascolo was the YMCA of South Palm Beach County’s marketing committee, where he set about trying to get the word out about all the YMCA does.
“What I wanted to do is help them uncover the obvious,” he said.
By 2015, Mascolo was drafted to serve on the Y’s board of trustees.
For Davis at the Boynton branch, Mascolo is a go-to guy, who is always looking for ways to help the organization.
“When you think of a cheerleader or an advocate, that’s Rich,” Davis said. “No matter what challenges we face, Rich is always a positive force.”
Mascolo points to a common denominator between what his parents and aunt and uncle dedicated their work to and what the Y sets out to achieve.
“They tried to build bridges for kids they thought would fall through the cracks and who don’t have advantages or access to resources,” he said. “The Y is about building bridges and filling gaps.”
His father became a superintendent of schools pioneering an alternative school program, while his uncle created an innovative program and was recognized as “Teacher of the Year” by Bill Clinton. His aunt was a reading specialist who developed creative techniques for her students, while his mother was an elementary school teacher, beloved by her students.
“All of them recognized the potential of every child,” he said.
Mascolo says the Y has a similar vision. “When I see the kids in the Caridad YMCA camp having the greatest day of their lives, I think about the kindness of all the people I reached out to,” he said.

NOMINATE SOMEONE TO BE A COASTAL STAR
Send a note to news@thecoastalstar.com or call 337-1553.