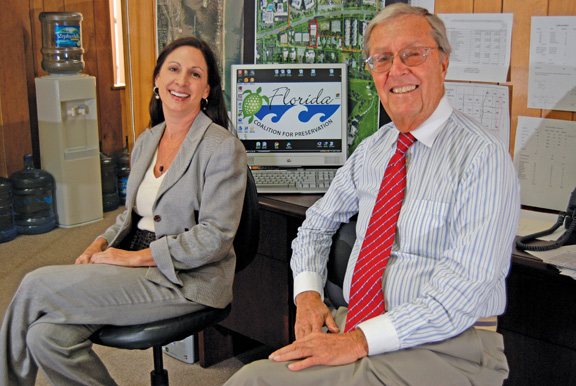 Kristine de Haseth and Bob Ganger in the Florida Coalition for Preservation office in Delray Beach. Photo by Jerry Lower

Word arrived like a weatherman’s warning that a Cat 5 was whirling his way: The residents of Briny Breezes were considering a proposal to sell their whole town for $510 million to developer Ocean Land Investments, which wanted to build more than 1,500 condos, timeshares and hotel rooms.
To Bob Ganger, it wasn’t a development, but “a huge city, really, right in the middle of what is currently the rather placid barrier island.” Within a few weeks, the Florida Coalition for Preservation was born — “at that point without even finding out whether anybody already had that name.” Ganger and co-founder Tom Evans, a former congressman from Delaware, sat at the helm.
Since then, the coalition — which represents the barrier island from the Ocean Avenue bridge in Lantana to the south end of Delray Beach — mobilized enough opposition to help stymie the Briny Breezes development, has spread the word about other development proposals, lobbied officials, monitored countless government meetings and stood up for sea turtles.
The coalition might have been created out of desperation to draw attention to the Ocean Land project, but it now appears there’s no turning back. The group, all-volunteer except for executive director Kristine de Haseth, has just entered its fifth year.
State planners now call the coalition for ear-to-the-ground info on development proposals, Ganger said.
It’s all about communication, he said.
“We really have little political clout,” Ganger said in his office off U.S. 1 in Delray Beach. “But we sure as heck get a lot of people to know what’s going on. And they cumulatively have more clout.”
The little wood-paneled office is crammed with files and poster boards. De Haseth mock-boasts that it is home to the rare office bathtub — but it turns out that the tub is just another place for storage, filled with plastic cups, toilet paper and coolers.
Ganger, a retired vice president with Kraft Foods, recruited de Haseth, an Ocean Ridge resident, for her business and activist experience. She was a licensing and merchandising executive with Sony Music, and helped persuade a California township to issue bonds to buy and preserve land in Tiburon, Calif., just across the Golden Gate Bridge from San Francisco.
Ganger and de Haseth aim for speed — since governments and developers have a head start, every second counts. So they obsessively monitor board agendas looking for any sign of something that residents ought to know about or else.
“The summer, where you would think everything would be nice and quiet, is usually our busiest time because most people try to do their kind of behind-the-scenes sneaky deals during the summer,” de Haseth says.
Other than monitoring ongoing issues — including Briny Breezes, which Ganger and Haseth expect to develop eventually — they hope to help governments create a unified master plan for their entire stretch of island. As it is, development rules are inconsistent, created by a hodgepodge of jurisdictions.
The coalition feels the master plan is an especially urgent matter, considering the deep cuts to the state Department of Community Affairs proposed by new Gov. Rick Scott.
“If we don’t do it, DCA’s not going to be around to do it for us,” de Haseth said.
Dorinda Burroughs, an Ocean Ridge resident who has worked with the group since its early days, said the coalition’s successes are undeniable.
“There’s no doubt in my mind that without the coalition we would have a much different picture going on,” she said.
Bob Victorin — a trustee with the Beach Property Owners Association, which has worked with the coalition occasionally — said it took two years to develop a master plan for the Delray Beach barrier island it represents. And that only covers one jurisdiction.
He called the coalition’s role “huge” — especially in light of the Briny Breezes proposal, which might have spawned other similar developments.
“They played a major lobbying function,” he said. “If that had gone forward, it would have been a forerunner to other parcels.”
Ganger — who insisted they don’t want to block development, just irresponsible development — said it’s hard work, and he expected it to be. That’s the only way to make things happen.
“You don’t get things done unless you really dive in,” he said. “If we didn’t do it, it wouldn’t get done.”