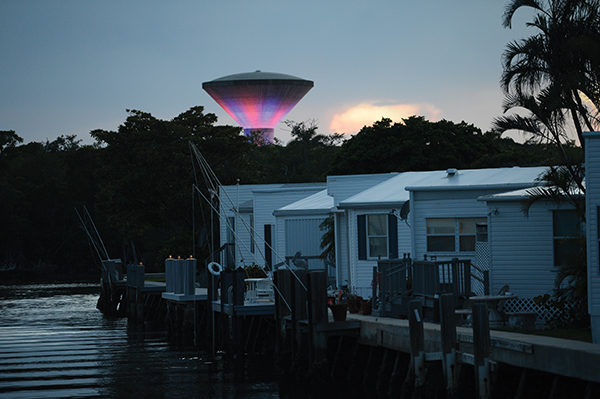 A July 27 ribbon-cutting event showcased Boynton Beach’s $30 million utilities project — complete with LED lights for the adjacent water tower — under budget and on time.
Boynton Beach Mayor Steven Grant was pleased with the upgraded facility at the East Water Treatment Plant, at 124 E.  Woolbright Road.
“Meeting budget is always what you want to hear in government and [saving] money,” Grant said.
The project includes the largest and most modern magnetic ion exchange plant in the world for pretreatment of water, according to the city.
The MIEX pretreatment allows Boynton residents as far west as Military Trail to taste clean, fresh water.
Boynton Beach also provides water to the coastal towns of Ocean Ridge and Briny Breezes, residents in the County Pocket and St. Andrew’s Club.
The water is pumped from the city’s western well field via a new pipeline. Pumping raw water from the west protects the eastern well field from saltwater intrusion. A resin plant that pretreats the 16 million gallons of raw water was built with an improved design, minimal footprint and reduced costs.
The improvements will meet Boynton Beach’s water requirements for the next 20 years and for bigger population levels east of Interstate 95.
A new 3 million-gallon potable water storage tank was also constructed. The completed project increased the east plant’s capacity from 19.2 million gallons to 24 million gallons per day.
“We’ve been working on the project six to seven years, trying to work out the best way to do this and at the same time save our water resources.” said Michael Low, manager of technical services at Boynton Beach Utilities.
The project also will include public art in Edward F. Harmening Arbor Memorial Park at Woolbright Road and Seacrest Boulevard, titled Water, You and I. Once it’s completed, a grand opening event will be held for the public.