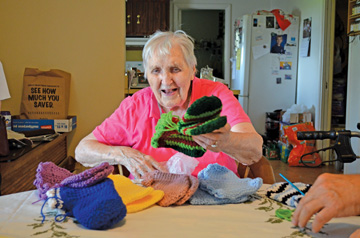 Jenny Bremanis proudly shows off booties she has crocheted. Photos by Jerry Lower

By Ron Hayes
Jenny Bremanis turns 101 on Oct.1.
Or maybe 103.
She was certainly born on Oct. 1, 1910, in Latvia. A century later, she’s still alive and remarkably well, sharing a home with her daughter, son-in-law, son and grandson on Hypoluxo Island.
She, however, insists that her actual birthdate is Oct. 1, 1908. Her father altered the ages of several family members, she claims, making everyone two years younger so her brother might avoid the draft.
“I’m not so sure I can believe that,” says her son, Jake. “Nobody can prove it.”
Her daughter, Biruta Ditrichs, is also doubtful. “If that happened, he must have had pull.”
But who’s counting? Most of us would be happy to reach even 101 so healthy and happy.
“I believe all is in God’s hands,” she says. “Nobody knows how everything started, but if you give to other people, God will give it back to you.”
Her English is shaky and her accent pronounced, but Jenny’s smile speaks volumes. With her children helping a bit with translation, she tells a wonderful immigrant’s tale.
She was one of seven children, born Jevgenija Emsins. In 1945, she arrived in Germany’s American zone, a war refugee with her husband, Jekabs, whom she married in 1935. He died in 1976 and she never remarried. Of their five children, one died before the war, another while they were traveling. A third, Andre, died two years ago.
In 1950, she emigrated to New Brunswick, N.J., where she worked as a seamstress for Bond’s clothiers for 20 years. And that, she says, is the secret of a long life. Hard work.
“I was always working! I bake rye bread, cake, sewing and working real hard all the time. I’m still working!”
She’s reasonably spry for her age, moving about the house with a three-wheeled walker. From the bag dangling from the walker, she pulls out balls of yarn and crochets booties. “I make two pairs a day,” she brags. She gives them away.
Her diet?
“Cheerios!” With blueberries. And she’s also partial to almond cake, bear claws and bowls of hot oatmeal laced with garlic. She has never smoked.
And what about alcohol?
“I like cognac!” she says, with a very big smile.
She has two hearing aids, uses eyedrops and supplements her diet with vitamins E and B12 and a daily aspirin.
Son Jake has a theory about her longevity.
“In New Jersey, her house had a basement, two floors and a walk-up attic,” he says. “She got a lot of exercise.”
Failing eyesight has hindered her ability to enjoy TV soap operas, so she reads Latvian novels with the help of a magnifying glass.
Ask about hobbies and the wide smile flashes again.
“I like gambling!” Once a regular at Atlantic City, she now plays the slots at the Hard Rock Cafe and the Isle in Pompano. But she’s sworn off Lotto and scratch-off tickets. Her long losing streak has made her suspicious.
On her birthday, about 20 friends plan to gather at La Cigale in Delray Beach. Her tiramisu will not have 103 candles. Not even 101. And she’ll drink a little wine instead of cognac.
“I am happy,” she says. “No more cognac, but wine is
OK.” 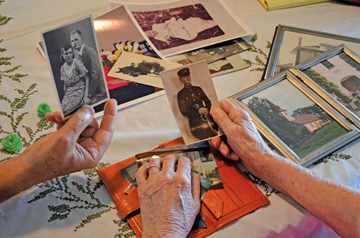