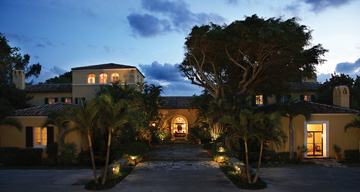 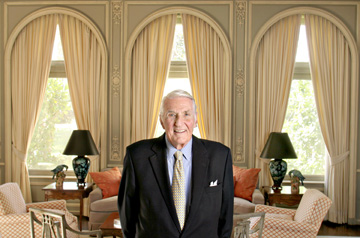 
Back in 1957, Eisenhower was president, Leave It To Beaver premiered on TV, and Elvis was shaking, rattling and rolling
his way toward becoming the King of rock ’n’ roll.

Closer to home, a couple of movers and shakers were making headlines, too. The former Duchess of Marlborough, Consuelo Vanderbilt Balsan, was selling her fashionable

Benjamin turned much of the mangrove hammock island into a gated, luxury subdivision called Point Manalapan and transformed the Vanderbilt Balsan estate into a

“I wanted to have some sort of center to the community here,” says Benjamin, who had moved to Florida from Southhampton, Long Island, in 1950.


He knew a thing or two about local social clubs as a member of the Everglades Club, Sailfish Club and the Bath & Tennis in Palm Beach and the Manalapan’s
other swanky club, La Coquille. 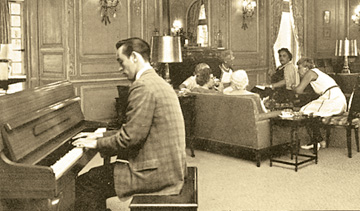 According to the brochure promoting the Manalapan Club at the time, members were provided “a full round of social

Hotel service was available as well. Guest suites, with views of the lake or the golf course, were air-conditioned for heat or cooling. Many had private terraces and

“This (club) was largely people who bought houses here,” Benjamin recalls. There were no initiation fees, just annual dues of $400. Others were permitted to join,

too, as long as the membership committee voted them in.

It took two years to get Casa Alva (which Consuelo Vanderbilt Balsan referred to as her “winter cottage”) into club form. Kitchens were modernized, a golf

course was installed, men’s and women’s locker rooms and a snack bar were added
to the old pool house, and the yacht docks were expanded. Staff was brought on
board, although not nearly as many as were employed by the former Duchess of
Marlborough, Benjamin says. 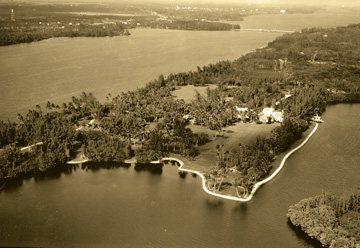 
A group of settlers had put Manalapan on the map in 1894, when they put up a hunting and fishing lodge in the town’s south end between the Intracoastal and
the ocean. But this tony community halfway between Delray Beach and Palm Beach
found its place on the social map with the construction of two grand homes for
two great-grandchildren of shipping and railroad tycoon Cornelius Vanderbilt.
One was built on the ocean in 1929 for Commodore Harold Vanderbilt. The other
was Casa Alva, built across the lagoon in 1934 for Harold’s sister, Consuelo
Vanderbilt Balsan.

Like many aristocratic American girls of her time, Consuelo married into an aristocratic European family. Her husband was the 9th Duke of Marlborough,

making her the Duchess of Marlborough. Her domineering mother, Alva, arranged
the match. After the pair divorced in 1926, Consuelo reconciled with her mother
(the house’s namesake) and found true love with French balloonist Col. Jacques
Balsan.

During the height of the Great Depression in 1934, the Balsans bought the south end of Hypoluxo Island and three nearby islands for $75,000. There already was a home

on the 50-acre property. It was called La Linda and it had belonged to the John
Demarest family. 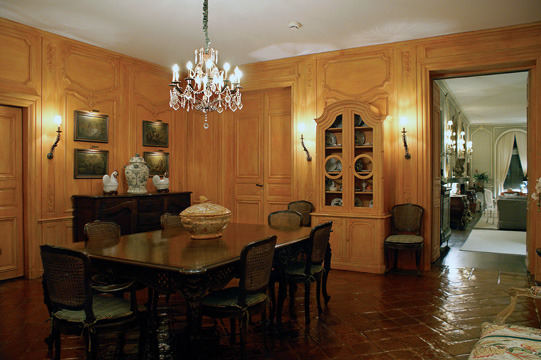 romantic mansion. Fatio had his work cut out for him because the house had to
be renovated to include the couple’s priceless collection of exquisite 18th-
and 19th-century hand-carved French wood paneling. Collected from churches,
castles and manor houses before World War II, the paneling varied in height so
the ceiling height in different rooms had to vary, as well. 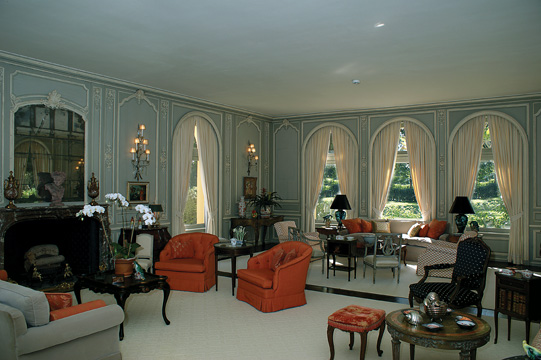 The wilderness mansion’s north wing became the bedroom wing and the south wing housed servants. The old garage area, with its cypress ceiling, became a living

room. As Fatio’s work continued, all that remained of the original structure was
a stucco tower.

Casa Alva mirrored the Balsans’s attention to detail and was known to be one of the most richly furnished homes in all of South Florida, according to Fatio’s

the grounds. A print of one of his paintings of the pool still has a place of
honor above the door in the library.

Churchill came to Casa Alva in 1946 in route to Fulton, Mo., to deliver his Iron Curtain speech at Westminster College.

“I like to say he was polishing it up here,” Benjamin reflects.

Life at the club The Manalapan Club’s brochure gives a glimpse into life there:

Primarily a social club, it provides relaxation amid sumptuous surroundings. The blue salon, a large, delicately paneled room with a wood-burning marble fireplace
and two book-lined walls, is furnished with cozy groupings of comfortable
chairs where cocktails and conversation are welcome. The adjacent smaller game
room and the gold room are inviting and a bit more intimate. The cocktail
lounge and the pink and green dining rooms possess a charm of their own. The
loggia and terrace are the out-of-doors and under-the-stars setting for many
club events. 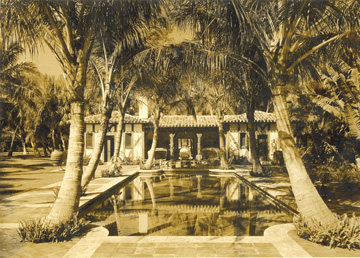 “The ladies played bridge, and outside there was the nine hole, par-3 golf course,” Benjamin remembers. “Everybody had a (golf club) cane for their clubs.”
Children came for the pool and to take lessons from the tennis pro, who had a
top-notch reputation.

Special outings were part of the merriment, as is evident in this account in the April 1964, issue of the Palm Beach Daily News:

The Paddleboat Queen steamed into the Manalapan Club yacht docks on the South of Hypoluxo Island on Saturday evening and picked up a gay group of club members,
marking the final gala event of a busy Season. … The spring cruise has become
almost a tradition at the Club.

“We had a wonderful French chef who had been the pastry chef at the Gulf Stream Club,” Benjamin, town mayor from 2002 to 2008, says. “There were big New Year’s
Eve parties, awards dinners for golf and tennis, and quite a few weddings. I
myself performed three weddings here, although that was after the club closed
and I was the mayor.” 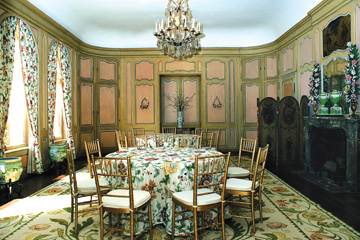 Thirty-four years ago, Manalapan didn’t have its own Town Hall, so commissioners held their meeting in Casa Alva’s main drawing room. Benjamin rented out a former butler’s

room to the town manager. A building on the property was used for the town
library.

After the National Enquirer moved to Lantana in 1971, media mogul and Manalapan resident Generoso Pope made a habit
of bringing his editors to the club for lunch.

“He (Pope) was very pleasant to me,” Benjamin remembers. “I got him to serve on the board at JFK Hospital. He never said boo at board meetings, but then there
would be a check for $1 million now and then.”

By 1976, Benjamin determined it was time to raise the annual dues by $100. When members resisted, he closed the club for good.


“A lot of residents were business executives, a lot of them were from steel companies and their stocks sank in the ’70s after a bad economic time,” Benjamin recalls.
“In a way, I wished I had kept it open. It gave more of a sense of community to
this part of our town.” 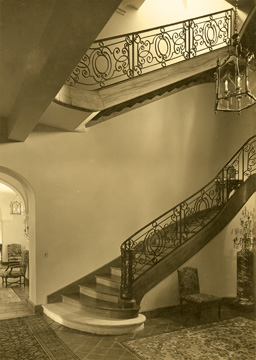 New air conditioning was installed and kitchens were updated in the home, with its eight bedrooms (including two master suites), eight bathrooms, a stunning pair

of wrought-iron-embellished staircases, and even a basement for storage. The
house, on five acres of land with 500 feet on the water, even has a special
closet for hats, a silver vault, and an elevator to the second floor for those
who don’t want to tackle the stairs. Apart from the main house, there’s a
four-car garage, pool, and a one-bedroom lakefront cottage cantilevered out
over the lake.

“This is a very amiable house,” Benjamin says. “It’s a lovely house to be in, a peaceful house, really a joy.” But
now the couple is ready to downsize.

The Benjamins have the house listed with Diana Reed of Illustrated Properties for $13.5 million. “We’ve entertained the high and mighty,” Benjamin says. “Now
we’re getting older and it’s time to simplify.”