Doris Mingione is in departure mode. She’s a widow, moving to Colorado to be near her son, so today is her all-but-final day to deliver hot meals to some of West Delray’s homebound elderly and disabled. The typed route — names, addresses, number of portions for each of 17 homes — is taped to the dashboard of her tan Toyota Avalon. The list includes notes about each recipient (“Caution! Dog! Ring Bell!”; “Elderly — very frail. Slow to answer door”); as an 11-year volunteer for C.R.O.S. Ministries’ Caring Kitchen, Mingione knows these details, and more. The notes are really for her soon-to-be replacements: St. Vincent de Paul seminarians Martin Nguyen, 22, and Jonathan Richardson, 23.
On a recent October morning, she eases away from the building on N.W. 8th Avenue, having packed 27 takeout boxes — baked fish, lentils and rice, beets, applesauce, plus packaged rolls, peanut-butter-and-jelly sandwiches, several pies and cookie-filled containers — in the backseat and trunk of her car.
First stop: an elderly blind man. “He lives alone with the help of his neighbors,” Mingione says, pulling into the driveway of his modest home. Sitting on a lawn chair, just outside his door, the man shakes hands with the two young seminarians as Mingione explains, “We’re just gonna put the food in the refrigerator.” The man smiles and thanks her. “OK,” he says, a Caribbean lilt to his voice. “You got one more week, huh? I’m gonna miss you.” When The Caring Kitchen began, in 1993, serving hot meals to the homeless, low-income and seniors, its homebound clients numbered five. That figure fluctuates now, between 50 and 60. Volunteers deliver meals on Mondays, Wednesdays and Thursdays. The Kitchen serves sit-down breakfast and lunch five days a week, dinner four days — a total of 7,200 meals a month, says program director April Hazamy.
The economy is a challenge. “People are still donating food, but the amount is definitely less,” she says. “Especially fresh produce and protein: meat and fish.” The food pantry, a part of C.R.O.S. Ministries but separate from The Caring Kitchen, has an even harder time. “We’re struggling but not like they are; they can only give (in bags of groceries) what they have in stock,” Hazamy says, and, with canned-goods donations down by about 25 percent, that stock is severely diminished. The demand keeps growing. 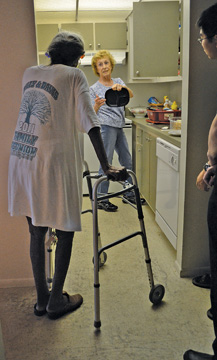 Doris Mingione’s second stop of the morning is for a single mother of three, a cancer patient undergoing chemo. Mingione plops a bag of ice into a cooler by the front door, then adds four meal boxes. She jots a note on a slip of paper and tapes it to the door, for the woman’s teenagers: “Don’t Forget to Bring Food In.”
It’s not yet noon, with 15 deliveries ahead. Her rounds can take an hour, or three hours, depending on who’s at home and who wants to chat. She will, she says, miss these people: the woman with severe arthritis whose husband has Alzheimer’s, the man who gets kidney dialysis three times a week, the 99-year-old legally blind woman who still beats her friends at poker. Mingione will miss them all, but Martin and Jonathan will take on the route. She, and they, will hope that food donations continue, to make their work possible.