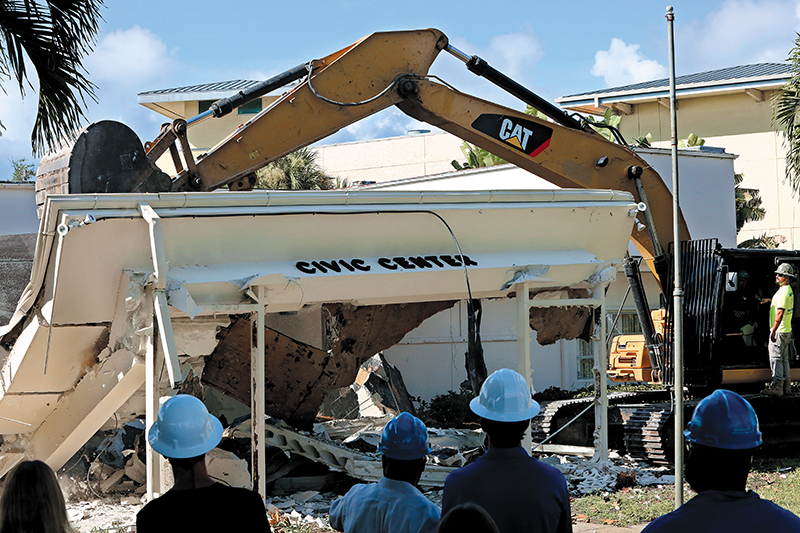 Boynton Beach officials and others gathered for the tearing-down of the old Civic Center, at 128 E. Ocean Ave. City employees moved in August to temporary space. After the city hall at 100 E. Boynton Beach Blvd. is demolished, the site will be cleared for construction of Town Square, which will include a city hall, hotel, 705 apartments and two parking garages. Construction is expected to finish by the end of 2020 at an estimated cost of $250 million to the partnership between the city and E2L Real Estate Solutions. The city’s public meetings are now at the Intracoastal Park clubhouse, 2240 N. Federal Highway. Tim Stepien/The Coastal Star

Several companies in South Palm Beach County ranked on the annual Inc. 5000 list of the nation’s fastest-growing private companies, with two in Boca Raton placing within the top 200.

With sales that jumped 4,547 percent in three years to $11.3 million, reCommerce, 1515 N. Federal Highway, a company that partners with brands to optimize their presence on Amazon, placed 62nd nationally. Alturna-Tech, 2300 Glades Road, Suite 302E, an IT management company, ranked 129th. Its revenue rose 3,082 percent in three years to $10.3 million.

The annual Inc. 5000 event honoring the companies on the list will be held in mid-October in San Antonio.

“Mayhem T-Shirt Printing was chosen for this Growth Grant award because of its demonstration of a well-defined plan for growth, ranging from executing new marketing initiatives, purchasing new equipment or other creative ways to grow and expand,” said John Hearrell, the association’s vice president of membership and affiliate programs.

Members of the Boynton Business Professionals Leads Group recently met at the Banana Boat in Boynton Beach for a business social event. Two leads groups within the Boynton Beach Chamber of Commerce meet twice a month. The goal is to give members a chance to develop referral networks.

Art historian and curator Elliot Bostwick Davis has been appointed director and CEO of the Norton Museum of Art to succeed Hope Alswang, who is retiring March 1.

Davis comes to the Norton from the Museum of Fine Arts, Boston. She’ll join the Norton soon after the Feb. 9 opening of its 59,000-square-foot expansion and new sculpture gardens designed by Pritzker Prize-winning architect Lord Norman Foster of Foster + Partners.

Evelyn & Arthur stores will close Nov. 6 to raise awareness and to encourage voting in the midterm elections. “We believe voting is not just a constitutional right but also an important civic responsibility,” said Adrianne Weissman, president of Evelyn & Arthur. “As history has shown, everyone has the power to make a difference, and now, more than ever, this is important to stand up for what we believe in, whatever that may be.”

When stores reopen Nov. 7, shoppers who provide proof they voted, either with a photo taken outside the polls or by presenting their voting sticker, will get 20 percent off one item.

The network kicked off with three shows from 8 a.m. to 11 p.m. Monday through Sunday. Each week, a new show or segment will broadcast starting each Monday. The lineup includes: Showcase of Homes with host Olivia Hollaus; Luxury Living at The Oaks with Lisa Hindin and Brian Bahn; and Luxury Living at DelAire Country Club with Jim Pappas and Paul Bidva. Lang TV can be viewed across all smart TVs, Roku, Apple TV and from any internet connection by logging onto www.langrealty.tv. ;

Overall sales of single-family homes in Palm Beach County realized a 1.7 percent year-over-year increase for August, and sales of homes priced over $1 million increased by 12.9 percent, according to market reports.

“We have had a stable market month over month with moderate variances in year-over-year data for single-family homes in Palm Beach County,” said Jeffrey Levine, president-elect of the Realtors of the Palm Beaches and Greater Fort Lauderdale. “What is notable is the 5.4 percent year-over-year rise in the median sale price of condos and townhomes to $185,000. This is simply because there is very little inventory in that price range for single-family homes.”

An 8,431-square-foot home built in 2017 at 1400 Royal Palm Way in Boca Raton, which was listed for $13.75 million, sold for $11.25 million to 1400 Royal Palm Land Trust LLC. The listing agent was Chad Gray of Coldwell Banker, and representing the buyer was Marie Mangouta of Douglas Elliman Real Estate.

According to Douglas Elliman, this is the third Royal Palm Yacht & Country Club home that sold this year for more than $10 million, and this sale marks the second-most expensive home sold in that community. Highest sale this year was for 312 E. Coconut Palm Road, which sold for $11.6 million in January.

A home at 6017 Old Ocean Blvd. in Ocean Ridge, once the site of fundraising events for Republican presidential candidates, including the late U.S. Sen. John McCain, is on the market for $7,999,999. The events occurred when Lothar and Carlyn Mayer owned the home and played hosts.

Its current owner, Yves Moquin, has listed the property with Val Coz and Jeff Wilson, agents with Douglas Elliman Real Estate. The British West Indies-style house has 13,376 square feet of living space with ocean views from all major rooms.

On Sept. 4, Mason Slaine sold his unit at 1000 South Ocean in Boca Raton for $5.475 million to Diane Portnoy. Slaine is chairman of FT Media Holdings, based in Greensboro, N.C. He is also a director and investor in RS Energy Holdings, Reorg Research, Efront Holdings and Certara LLC. Portnoy is the CEO and founder of the Immigrant Learning Center, near Boston.

The four-bedroom, 41/2-bath condo was first listed for $6.1 million by Douglas Elliman Real Estate agent Senada Adzem. Slaine bought the condo in June 2014 for $5.725 million. In 2016, Slaine bought a five-bedroom home at 850 Lake Drive in Boca Raton for $11.5 million, according to property records.

“It was the highest resale in the building for a three-bedroom unit,” says Scot Karp, director of the ultraluxury condominium division at Premier Estate Properties, who has been selling units in the building since its preconstruction days. The two-tower, 12-floor development opened in 2001.

Orr was U.S. ambassador to the Asian Development Bank from 2010 to 2016. He graduated from Atlantic High in Delray Beach and is now a distinguished visiting professor at Florida Atlantic University, where he earned a B.A. in history.

Orr has been a professor at Stanford and Temple universities and was president of Boeing Japan. He earned his master’s degree in government from Georgetown University and a doctorate in political science from Tokyo University. His book, The Emergence of Japan’s Foreign Aid Power, won the 1991 Ohira Prize for best book on the Asia Pacific region.

His lecture will be in the Public Safety Conference Center, PSD 108, on the Lake Worth campus, 4200 Congress Ave. The event is free and open to the public. To attend, RSVP at www.palmbeachstate.edu/Honors/SpeakerSeries.

The League of Women Voters of Palm Beach County invites the public to a Hot Topic Luncheon, “Ballot Choices: Property Exemption and Taxes” with Anne Gannon, Palm Beach County tax collector, and Tim Wilmath, chief appraiser of the Property Appraiser’s Office. Scheduled for 11:30 a.m.-1 p.m. Oct. 17, the event will be at the Atlantis Country Club, 190 Atlantis Blvd. in Lake Worth.

The talk will include Amendment 1, which would increase the tax savings for permanent residents but create shortfalls for county and city governments. Amendment 2, which would continue a 10-year cap that helps business owners in the county, also will be discussed.

Gannon will explain options for paying tax bills, while Wilmath will discuss the pros and cons of each amendment.

Upcoming Tastings at the Tiki include PR Yak-Yak, the 11th annual benefit for the Gold Coast PR Council and PRSA Palm Beach, which will be held on Oct. 18.

Best Bite for Vets, an annual restaurant competition benefiting Project Holiday and the HOW Foundation of South Florida, will be Nov. 15.

For information, call 278-1700 or visit www.cranesbeachhouse.com.

The Community Foundation for Palm Beach and Martin Counties invites residents to share a meal and discuss ideas to strengthen the community during a localized nationwide movement, On the Table, scheduled for Oct. 24.

People will participate at homes, restaurants and other venues throughout the day, as well as through social media using #OnTheTableFL. It’s a national initiative funded by the John S. and James L. Knight Foundation.

“On the Table reinforces our commitment to building a more vibrant community by going straight to the source — the people we serve — to understand the issues that matter to them most so we can continue to invest in organizations that impact the community,” Bradley Hurlburt, president and CEO of the foundation, said in a statement. “We’re grateful for the opportunity to bring this initiative to our area and we know that great ideas will come together and inspire even greater grassroots action.”

The issues and ideas discussed will be driven by the perspectives of the participants. Each table discussion will be led by a host organizer, who is a local volunteer who brings together a table of participants.

“The most rewarding aspect of On the Table is that it serves as a reminder to every resident in this community that their voice matters, and what they have to say will collectively inspire greater impact,” Daryl Houston, community investment officer at the foundation, said in the statement. “Taking part in this initiative is simple, as these conversations can take place during breakfast, lunch, dinner or even during a coffee break or cocktail hour.”

Participants will complete a survey, which will be compiled by national research firms to analyze the issues and ideas for community improvement that resulted from the day’s discussions. The Community Foundation will share these outcomes to help determine how best to advance some of the ideas and solutions generated.

The Community Foundation is one of 10 foundations across the U.S. participating in On the Table, which had a successful pilot in 2017. For information or to sign up to participate as a host or a guest, visit www.onthetablefl.com.