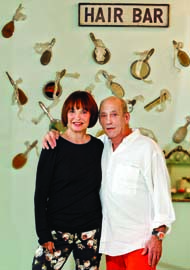 from Sag Harbor, N.Y., to Palm Beach, just north of the Lake Worth Bridge.

The owner of the Style Bar Day Spa came to the business accidentally.
Perrie Gurfein grew up in New York City, where she also raised her family. She was a buyer for department stores, too. After the kids were grown, she and her husband decided to move to the Hamptons to live a more relaxed lifestyle.
That lasted for about a week. She was looking for a place to get a manicure and pedicure but could not find one that met her expectations. She suggested to her husband they open a full-service day spa to offer the high level of service she wanted.
The Style Bar opened in May 2000 with three rooms. It grew to seven rooms and was soon “the talk of the Hamptons. For 14 years, we had a wonderful family business,” Perrie Gurfein says. “We had write-ups in Vogue, Allure and New York magazines and all the local papers and magazines.”
Then a health concern made her consider a move to Florida. She ended up in the Bank United building, just north of the Lake Worth Bridge, because her son knew the owner. He flew up to Sag Harbor to meet with the Gurfeins, who ended up closing that location and opening a new spa in Palm Beach about four years ago.
“We built everything from scratch,” she says. The Style Bar features bamboo-base cabinets with granite countertops. It has separate areas for hair, manicures, pedicures and treatment rooms for facials, waxing and massages.
Gurfein says her spa has both male and female attendants. It also serves male customers who come in for manicures, waxing of the back and brow and massages.
The spa offers complimentary drinks such as wine and coffee, snacks and on Saturday morning, it serves bagels and cream cheese. “We want customers to relax and hang out,” Gurfein says. “Not just get your service, pay and leave.”
During the season, the spa is busy, but in the summer Gurfein is trying to build up business by offering promotional prices on the spa’s services and treatments. The promotions, such as a one-hour massage for $60 that usually costs $110, are valid through October.
The spa has about 3,000 square feet of space. During the summer, the spa employs 10 to 15 attendants, but that number increases to 25 during the season. She declined to reveal her annual sales volume.
The spa uses a public relations company to do its social media, including Facebook and Twitter. It advertises in local publications and donates to charities, too.
The spa hosts birthday parties, bridal parties and even goes to clients’ homes or hotel rooms to do hair and manicures or give massages.
One late Friday afternoon, three young women who just had their hair styled used their cellphones to take pictures of each other. They were oblivious to the raging storm outside. No matter, the spa gave each one a clear plastic shower cap to preserve coifs as they dashed to their cars.