Pedro Maldonado (below) works to create what he hopes will become

the world’s most valuable dreidel (above) at his studio 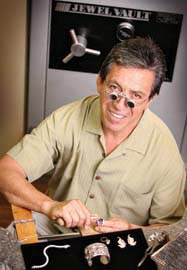 Pedro Maldonado learned how to make jewelry by assisting his father, a master jeweler in Cuenca, Ecuador.

“My father was a well-known jeweler there,” the son says. “He created a 35-pound monstrance for a Catholic church.” Its parishioners donated their jewelry for it.

Decades later, Maldonado, who owns Jewelry Artisans in Manalapan, is creating the world’s most valuable dreidel for the Chabad of South Palm Beach.

They are neighbors in the Plaza del Mar shopping center. In the summer when Shaina Stolik —whose husband is the Chabad’s rabbi — learned that Thanksgiving and Hanukkah would share the same date, she started to think of a world record to match the once-in-a-lifetime occurrence.

She eventually thought a dreidel, a spinning toy, would be appropriate.

Chabad’s congregants donated jewelry for it. Stolik plans to enter it into the Guinness Book of World Records in the new category of “world’s most valuable dreidel.” To qualify, the dreidel would have to be appraised and it would have to spin. She estimates the finished value will be about $9,000.

Maldonado hopes to finish it in early January, working in his newly expanded space.

The expansion gave him a jewelry-making area viewable to his customers. He also built out the space, meaning he put in the hardwood floor and built the display cases, trimmed with aluminum. “My wife says if the jewelry making doesn’t work out that I can make furniture,” he says.

He also expanded the space so that his two teenage sons could work alongside him and learn how to make jewelry.

Maldonado has a long history in the area. His Jewelry Artisans opened in 1991 in the plaza. Before that, he had a jewelry store for seven years in Palm Beach. His store manager, Emi Ebben, has worked for him for 23 years. She is a graduate gemologist with a degree from the Gemological Institute of America.

Jewelry Artisans also cleans and maintains jewelry for its clientele. One woman brought in jewelry owned by her late father-in-law to turn into something she could wear. The wedding band was sawed in half to create two arcs that would be turned into earrings. His cufflinks would become post earrings.

For rings and pendants, he often raises the stone atop a bed of filigree work to allow the light to shine through to the stone. He signs his pieces with a heart and his name.

“I’ve been around jewelry since I was a kid,” he says, “it comes naturally to me.”