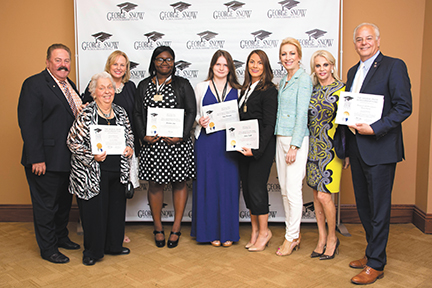 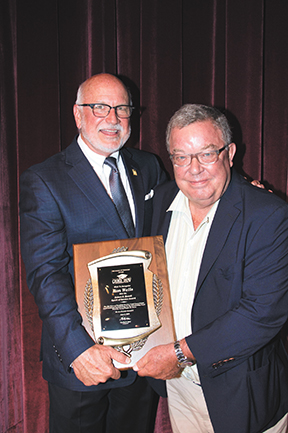 At the George Snow Scholarship Fund’s annual awards reception in June, the fund made financial commitments of $687,483 in scholarships and scholar-support services to 72 students headed for college.
Along with financial assistance, each Snow scholar received a gift bag with items that included a coffee maker and blender donated by Jarden Consumer Solutions of Boca Raton, a Microsoft Office Professional productivity suite donated by Microsoft Inc., first-aid kit donated by Boca Raton Regional Hospital, reference charts by Bar Charts, and oral hygiene kits donated by Dr. Douglas A. Rolfe.
Members of the organization met the recipients and thanked supporters for making the 2015-16 season a successful one. “This night shows us the fruits of our labor, and our donors get to meet the young people who will benefit from their efforts,” President Tim Snow said.
Also at this reception, Boca Raton resident Ron Wells received the Robert S. Howell Spirit of Service Award, acknowledging his volunteerism, generosity, commitment and unselfishness.

In May, the Arthur R. Marshall Foundation for the Everglades forged an agreement with the Everglades Foundation to administer and continue two key programs in 2017: the summer intern program for undergraduate and post-graduate students and its Everglades Symposium.

Marco and Mara Pindo, owners of Ristorante Sapori, held a fundraising dinner and wine auction to raise awareness and funds to assist Cuban families in need. They served 40 guests, who each paid $100.
The Pindos have already sent helpful items to families in Cuba, but they also are forging ahead with their long-term goals: to open a restaurant in Havana and to teach Cubans how to grow the simple produce needed to sustain it, as well as to use to improve their own diets.
Marco Pindo also plans to train young Cubans to cook, giving them a career option as tourism grows in Cuba. To donate, either bring items to Ristorante Sapori, 301 Via de Palmas, Boca Raton, or call 367-9779.

On June 1, marking Fleet Feet Sports’ one-year anniversary in Delray Beach, 55 area residents did a run along A1A in conjunction with Global Running Day. Afterward, participants attended a meet-and-greet with Olympic track and field trial qualifiers Lana Mims, Bryan Jasmin and Ron Similien, who live in South Florida. The Global Running Day celebration evolved from National Running Day in the United States, which was started in 2009 by running groups and race directors. 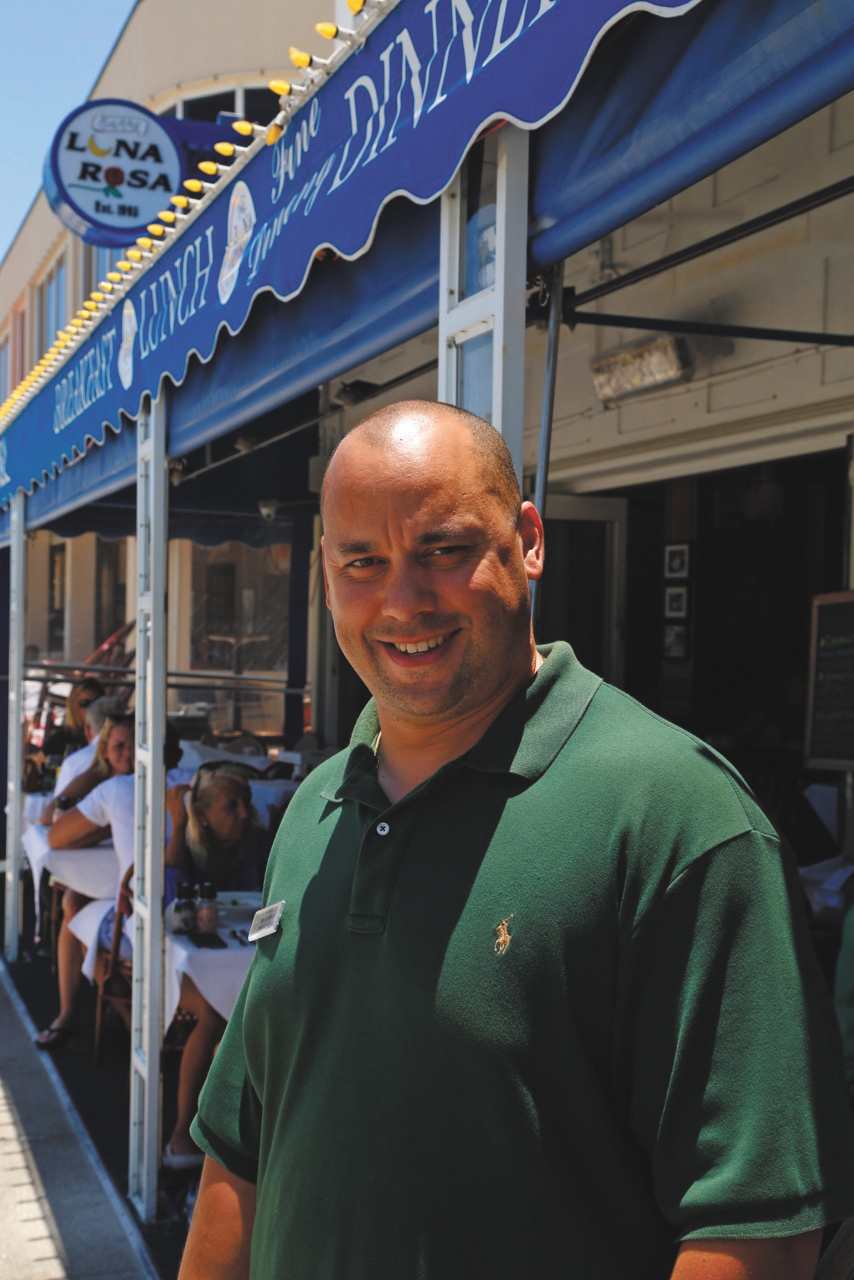 In June, the Palm Beach Area chapter of the Leukemia & Lymphoma Society named its south county man and woman of the year at the conclusion of the candidates’ 10-week fundraising campaigns: Morgan Tannenbaum, a veterinarian at Regency Veterinary Clinic in Boca Raton, raised $65,237, and Ariel Enisman, an attorney at the Presser Law Firm in Boca Raton, raised $11,862. 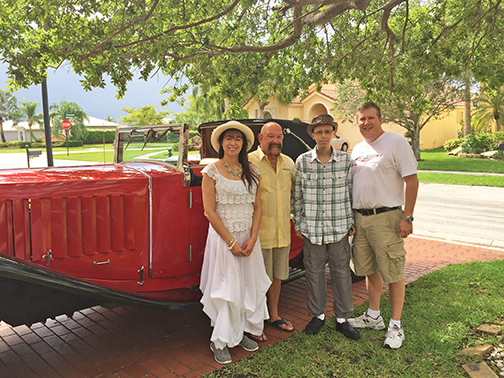 On May 28, Art of Speed Auto Events and the local car community presented the Cool Cars for Nicholas Car Show at Club 66 in Boynton Beach. The event raised $20,000 for Nicholas McClary, who was diagnosed with Ewing’s sarcoma ­— a bone cancer that affects mainly children — in December. Nicholas is the son of Car Show TV co-founder Andrew McClary.

The Greater Boynton Beach Chamber of Commerce offers summer series Lunch & Learn, “Closing the Skills Gap,” given by CareerSource Palm Beach County, at noon July 21. The free event, open to the public, will be held at the chamber board room, 1880 N. Congress Ave., Suite 214. To reserve a space, call 732-9501.

Delray Medical Center has earned the American Heart Association/American Stroke Association’s “Get With the Guidelines Stroke Gold Plus Quality Achievement Award.”
To qualify, hospitals must meet measures developed to reduce the time between the patient’s arrival at the hospital and treatment with tPA, a drug to treat ischemic stroke. If given intravenously in the first three hours after the start of stroke symptoms, tPA reduces the effects of stroke and lessens the chance of permanent disability. The medical center is at 5352 Linton Blvd., Delray Beach.

Samantha McLaughlin and Candace Milton have joined the Leighton Design Group, a residential and commercial interior design firm founded by Chris Leighton in 1989.
New to the interior design world, Milton was a production assistant and stylist in the television and fashion industries.
McLaughlin has worked in hospitality design in New Jersey for hotel developers.
The Leighton Design Group specializes in “organic-minimalism styling.” Its Florida studio is at 1020 S. Federal Highway, Suite 104, Delray Beach.

For its 33rd annual National Night Out crime and drug prevention event on Tuesday, Aug. 2, the Delray Beach Police Department will host a rally at the Delray Beach Tennis Center, 201 W. Atlantic Ave., Delray Beach, from 6 to 10 p.m.
Lock your doors, turn on your outside lights to show support, and spend the evening outside with your neighbors and officials. The event will have free music, food, entertainment and activities for your children. It will also feature demonstrations from the Delray Beach Police’s SWAT, K-9 and motorcycle units and the Police Explorers.

BizBash, a resource for event organizers, released its South Florida Top 100 Events 2015. Among the events listed were the Delray Beach Garlic Fest, No. 2 in the best food-related events, and Delray Affair, No. 3 in best parades and festivals.


Try out Tryst’s new summer specials: fried chicken dinner with a glass of bubbly on Sundays; “Wine Not?” specials with charcuterie and cheese boards on Tuesdays; burgers and hot dogs on Wednesdays; live entertainment on Thursdays; and late dining Friday and Saturday nights (till 1:30 a.m.). Tryst is at 4 E. Atlantic Ave., Delray Beach.