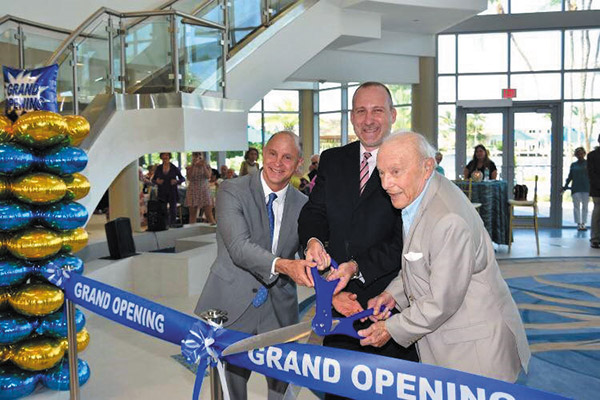 Harbour’s Edge, a senior living community at 401 E. Linton Blvd., Delray Beach, recently completed the $20 million renovation of its new Lifelong Learning Center, a renovated theater, new spa and fitness center, a second dining venue and a remodeled restaurant with a new exhibition kitchen and wine bar. Also, it named a new executive director, James Horsman, a hotelier with more than 30 years of luxury hotel and resort experience at properties that include The Ritz-Carlton Hotel company and Destination Hotels. Garlic Fest may have moved to Lake Worth, but Delray Beach artist Rebecca Loveless still comes out smelling like a rose. She won the first place SUNsational Award for the best commemorative poster during the Florida Festivals & Events Association’s 23rd annual convention and trade show in Orlando last month.
Other local winners in the $250,000-plus budget category were iHeart Media, first place for best radio spot; and Real Time Marketing Group of Delray Beach, third place for best website, www.sflgarlicfest.com.
Garlic Fest was founded to establish a fundraising source for local nonprofit organizations. The festival donated more than $610,000 this year.
The Florida Festivals & Events Association is a not-for-profit group that supports and promotes more than 3,500 festivals, events and fairs in Florida.

In August, Alexander P. Lee, 20, of Delray Beach, became a member of the National Society of Collegiate Scholars. The son of Delray Beach residents Terry and Dorothy Lee, he is a junior at Florida Atlantic University majoring in mechanical engineering.

Yachtico Inc., a company within the Research Park at Florida Atlantic University, was singled out as a “Florida Company to Watch” by Florida economic development organization GrowFL.
The research park provides an environment for companies in the research and development stages. It is home to 20 high-tech, high-wage companies and five support organizations.
Yachtico operates a regional Technology Business Incubator with companies that collectively employ 1,484 people with average salaries of $57,739, which include 149 FAU alumni and 107 student interns.
In 2016, the overall economic impact of the research park activities was $643.5 million.
Yachtico connects customers who want to rent or charter boats with fleet operators and boat owners. GrowFL is certified by the National Center for Economic Gardening through the Edward Lowe Foundation, a national nonprofit that supports entrepreneurship through research, recognition and educational programs.

The Greater Boynton Beach Chamber of Commerce’s networking luncheon on Sept. 13 will host a program featuring city Police Chief Jeffrey Katz. Networking will begin at 11:30 a.m. with the program to follow at noon. Cost is $25. The event will be held at Benvenuto, 1730 N. Federal Hwy, Boynton Beach.
The chamber also is gearing up for its 47th annual Boynton Beach Chamber Golf Tournament, which will be  Oct. 20 at the Indian Spring Country Club, 11501 El Clair Ranch Road, Boynton Beach. Registration will be at 11:30 a.m.; a box lunch will be at noon; and the shotgun start is scheduled for 1 followed by a reception and award ceremony at 5:30.
Prices are $550 for a foursome and $150 for a single player. To be a tee sign sponsor, the cost is $100. The tournament is sponsored by Porges & Eisenberg CPA LLC, TooJay’s, Florida Power & Light, Senior Helpers, Bethesda Help, and Palm Beach Community Bank. For information and to register, call 732-9501 or email elda@boyntonbeach.org

The Lord’s Place ranked seventh of the Top 30 Best Mid-sized Florida Companies to Work For in “The Best Companies” list featured in Florida Trend magazine’s August issue. This was the fourth consecutive year the organization made the list.
The Lord’s Place has worked for more than 30 years to help homeless people in Palm Beach County. Each year, hundreds of men, women and children transition out of homelessness at The Lord’s Place family campus, its men’s campus, three sites for homeless women and at more than 20 apartments throughout the county.  The organization provides job training and placement as well as clinical services.

The Community Foundation for Palm Beach and Martin Counties this year awarded $1.2 million in scholarships to 125 students who were evaluated by an advisory committee of board members and community volunteers based on a written application, test scores, transcripts and interviews. Individual scholarships ranged from $1,000 to $36,000 and were given to students from 32 high schools and colleges.
For information on the scholarship program, or about establishing a charitable fund at the Community Foundation, call 659-6800 or visit www.yourcommunityfoundation.org.

The League of Women Voters of Palm Beach County will offer two issues-oriented events this month. The first, a luncheon on “Why Courts Matter: The Impact Federal Court Decisions Have on Daily Lives,” is from 11 a.m. to 1 p.m.  Sept. 20 at the Atlantis Country Club, 190 Atlantis Blvd., Lake Worth. The keynote speaker is Nancy Abudu, director of legal operation for the American Civil Liberties Union of Florida. Tickets are $25 before Sept. 10 and $35 after. Register online at www.lwvpbc.org or call 968-4123.
The second event, at 6 p.m. Sept. 27, features Irving Labovitz, adjunct professor of business law at Florida Atlantic University, whose topic is “Constitutional Crises (de jour) Guaranteed to Keep You Up at Night.” The free presentation and Q&A will be held at the Palm Beach Post Auditorium, 2751 S. Dixie Highway, West Palm Beach. Register online at www.lwvpbc.org. 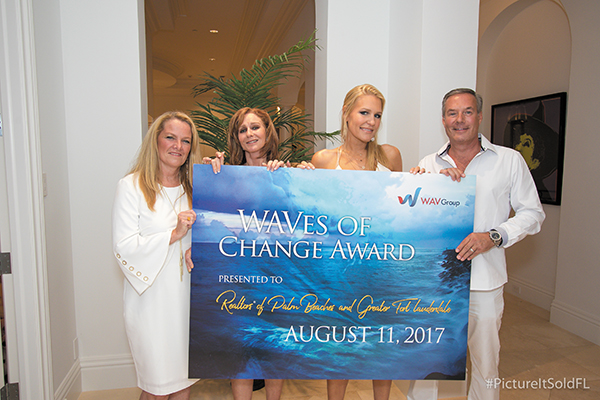 The Realtors Association of the Palm Beaches and Greater Fort Lauderdale Realtors were recognized as the top fundraising team by Habitat for Humanity Palm Beach County.
The group donated more than $5,200, and team captain Kim Flossie won the Pink Hammer Top Individual Fundraising Award.
The Community Outreach Taskforce of the Palm Beaches created a team, Tutu’s and Tool Belts, that raised money and helped construct a roof of a home.
Also, the association was honored by the WAV Group, a real estate business and consulting firm, with the first WAVes of Change Award for taking innovative steps to create positive waves of change in the industry.

The Space of Mind, a schoolhouse and community studio for students, adults, families and educators, will host a family open house from 9:30 a.m. to 12:30 p.m. Sept. 9 to introduce its new coaches as well as the interior redesign.
The studio is at 102 N. Swinton Ave., Delray Beach. For information, call 877-407-1122 or visit www.myspaceofmind.com.

Silver International Realty opened a second business, Silver International Realty 30A, for agents in the Santa Rosa Beach area in the Florida Panhandle. Owner Christel Silver’s daughter, Sabine Robertson, is on the sales team, and her grandson, Judson Robertson, has joined the company as an agent.
The main office is at 55 SE Second Ave., Delray Beach.