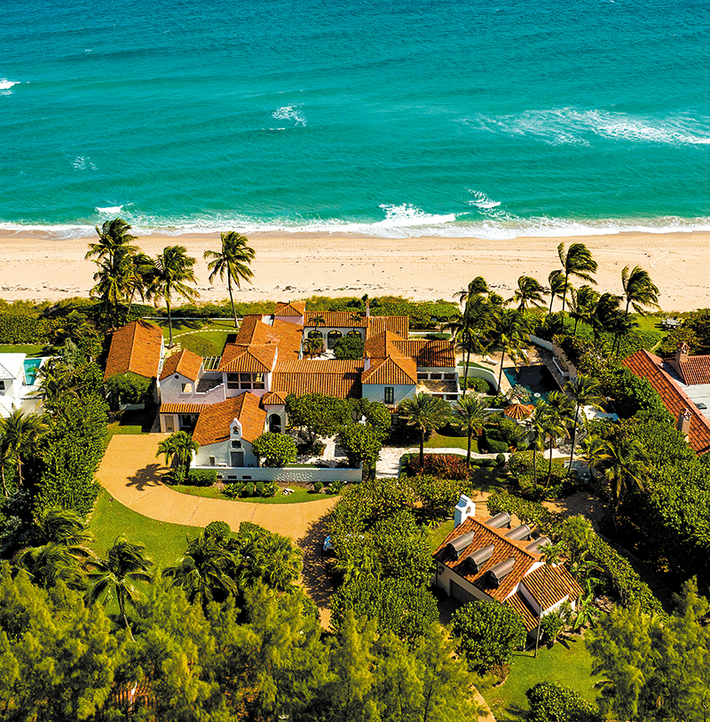 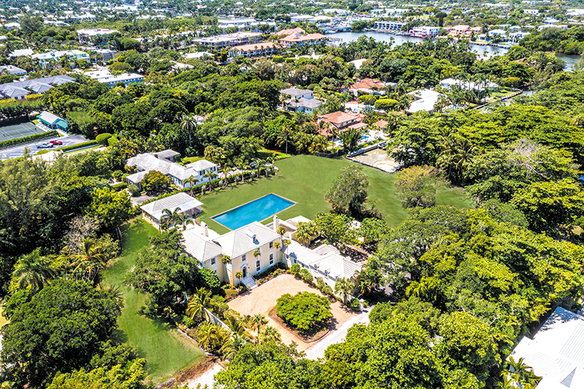 The majestic beauty of the rising sun over the Atlantic Ocean is one of the perks Gulf Stream oceanfront homeowners enjoy. These days, the seaside residents are also seeing the prices of their homes rise.
Michael and Dena Rashes sold their estate at 2817 N. Ocean Blvd. for $29 million in September. The new owner is Brian O’Neill.
This transaction is just short of the record-breaking oceanfront Gulf Stream deal of $33 million on March 3 at 3545 N. Ocean Blvd.
The Rashes’ estate, “Viento y Mar,” has a storied past, said agent Pascal Liguori, who with his son, Antonio Liguori, held the listing.
“It sold for just under three times its previous purchase price,” said Liguori, who leads the Pascal Liguori Estate Group at Premier Estate Properties.
“A completely renovated oceanfront compound, it was designed by Howard Brougham Major, a prominent New York architect, and built for Howard Whitney in 1926. Whitney was a partner with the Wall Street firm of Kissam, Whitney & Co. and president of the U.S. Golf Association.”
With more than 200 feet of oceanfront, this eight-bedroom estate on 1.32 acres includes a main house and a number of outbuildings. “The amount of land, the abundance of oceanfront, the proximity to Delray Beach and the architectural significance were attractive to our buyer,” said Geoff Braboy, who with David Gunther represented O’Neill.
Braboy and Gunther, previously with Lang Realty/Delray Beach, recently opened their own brokerage, Atlantic Waterfront Properties, 1855 Dr. Andres Way, Suite 3, Delray Beach.

A couple of weeks earlier, the historic Gulf Stream mansion at 1200 N. Ocean Blvd. marked a town record-breaking sale for a non-oceanfront property of $16.5 million. Stephen Benjamin sold his property, dubbed “Lemon Hill,” to Lemon Hill Partners LLC. Randy Ely and Nick Malinosky of Douglas Elliman’s Randy and Nick team represented Benjamin. Betsy Cooke and Brad Cooke of the Corcoran Group’s Cooke team represented the buyer.
On a canal off the Intracoastal Waterway, the 1939-era Georgian-style mansion was designed by society architect Marion Sims Wyeth. Benjamin paid $7.1 million for it in 2018.
Betsy Cooke did not disclose the buyers, but confirmed they intend to restore the home. “My buyers’ family has a long history in the town of Gulf Stream and they have always been interested in preserving historic properties,” Cooke said.
She said the property was advertised as a “rare opportunity with approximately 250 linear-foot yacht basin currently under construction as well as infinity edge pool and patio.”
Benjamin is a decorated yachtsman. He won a silver medal at the 1984 Los Angeles Olympics, was named Yachtsman of the Year in 2015 by US Sailing, and now heads North Sails, a sales and service facility for custom sails, in Miami.

Another Gulf Stream mansion recently made headlines. The James and Estee Sausville estate at 3565 N. Ocean Blvd. was selected as the overall winner in the HGTV Ultimate House Hunt 2022.
The Sausvilles bought their home in June for $27.5 million from James and Kimberly Caccavo.
“It definitely set a record for Gulf Stream at $4,495 per square foot,” said Michelle Noga, who co-listed the property with Paula Wittmann, both agents with William Raveis Real Estate. In that transaction, Mitch Frank, with Echo Fine Properties, represented the buyers.

El-Ad National Properties’ Alina Residences condominium project received a $100 million construction loan for its second phase from UMB Bank, according to records.
The first phase, Alina 200, a nine-story 121-unit building at 200 SE Mizner Blvd., was finished last year and has reached a $300 million sellout, according to an August news release from El-Ad.
The Phase Two buildings at 210 and 220 SE Mizner Blvd., consisting of 182 condos slated to be completed by late 2024, are approaching 50% sold. Agents of Douglas Elliman New Development Marketing are handling the sales. For more information, visit www.alinabocaraton.com.

Following a $65 million transformation, guests will enjoy luxe suites and breathtaking views from The Boca Raton’s 27-story Tower, the resort’s fifth hotel, set to reopen later this fall. It is just adjacent to the Harborside Pool Club.
Designed by the Rockwell Group, 224 rooms and suites will feature a contemporary coastal aesthetic with a luxurious yet casual vibe. Details include built-in window seating, bleached wood furniture, neutral linen fabrics, fluted feature walls and classic molding.
Rooms and suites will deliver flexible configurations, from connecting suites to entire floor takeovers, ideal for multi-generational families and groups of friends. A special touch in the Presidential Suite will include binoculars by Luxxoptica, and high-touch services for all guests will blend with modern technology.
For example, to enjoy an in-room movie, guests can opt for a cinema snack delivery from one of two Tower Robot Butlers. At the Tower Lounge, guests will enjoy complimentary pastries and coffee for breakfast, an assortment of afternoon snacks, and as a special weekend treat, a Sundae Bar will be offered. For more information, visit www.TheBocaRaton.com.

Florida Atlantic University’s ranking is on the rise this year, moving to No. 132 from No. 140 in the U.S. News & World Report list of “Top Public Schools” of the nation’s best universities. It ranked No. 41 in “Social Mobility,” which is based on graduation rates of students receiving Pell grants. It is the No. 1 public university in Florida for campus ethnic diversity, according to the report, and is designated as Hispanic-serving by the U.S. Department of Education.
In other rankings, FAU moved up 27 spots to No. 93 on the list of undergraduate nursing programs. Its undergraduate business programs moved up to No. 164 from No. 190.

Bond Street Salon’s 17th anniversary on July 23 was cause for a party with 100 guests in attendance, said Lauren Donald, founder and owner of the Delray Beach salon, a Five Star Beauty Destination noted by New Beauty magazine.
“Surviving the COVID-19 pandemic that shut down Bond Street Salon is something I wanted to celebrate as a small business owner,” said Donald. “I also wanted the 17th anniversary party to be an opportunity to support another Delray Beach woman-owned small business, which is why I selected Sweet’s Sensational Jamaican Cuisine to cater” the party’s light bites.
Bond Street Salon is at 25 NE Second Ave./Pineapple Grove Way. For more information, call 561-468-3303 or visit bondstreetsalon.com.

The Schmidt Boca Raton History Museum, home of the Boca Raton Historical Society, marks its 50th anniversary at a golden jubilee event on Oct. 26 at the Addison, 2 E. Camino Real, Boca Raton. The museum was founded in 1972 as a nonprofit organization in the 1927-era historic Town Hall, which is listed on the National Register of Historic Places. General admission tickets for the jubilee, priced at $200 and $180 for historical society members, can be purchased at https://shop.bocahistory.org/collections/tickets. GL Homes will fully fund Boys & Girls Clubs of Delray Beach and Boca Raton’s hunger relief programs with a $16,000 donation that will go toward 12,000 meals and snacks to the neediest children in south Palm Beach County.
“Hunger is an urgent issue that must be addressed. It is unacceptable that any child goes to bed hungry in Palm Beach County,” said GL Homes community relations senior director Sarah Alsofrom.

Jose Sotillo is the newest member of the YMCA of the Palm Beaches board of directors. Previously, Sotillo, IBM’s business development executive for 39 years, also served in leadership positions for several charitable organizations, including the Hispanic Chamber of Commerce.

The League of Women Voters of Palm Beach County will host a Hot Topic discussion on election issues, from 11 a.m. to 1 p.m. Oct. 19.
Guest speakers will be Wendy Sartory Link, supervisor of elections for Palm Beach County, and Marcia Herman, the League of Women Voters’ first vice president and chief of its speakers’ bureau.
The event will be held at Mounts Botanical Garden Exhibit Hall, 559 N. Military Trail, West Palm Beach. Prices to attend include $20 for a boxed lunch and $12 for entry to the garden, available at https://lwvpbc.org/event/october-hot-topic-3/#tribe-tickets.