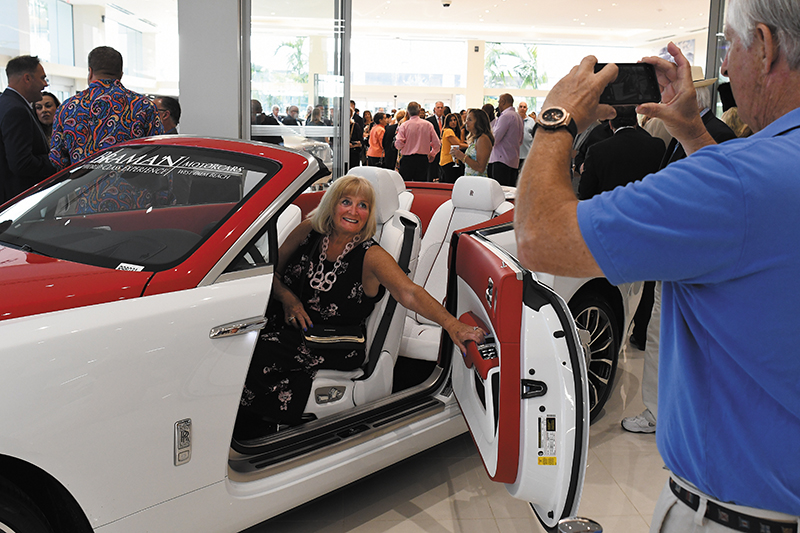 Posing in a Rolls-Royce with its rear-facing doors was a popular pastime. Photos by Jerry Lower/The Coastal Star

Martin Fritsches, president of Rolls-Royce Motor Cars, and Christophe Georges, president and CEO of Bentley Motors, came to town to help Braman Motorcars celebrate a major two-year overhaul in its dealership, and for good reason.
With 23 percent of all Rolls-Royces and Bentleys in Florida registered in Palm Beach County, we lead the state in ownership of those two luxury brands, records from the Florida Highway Safety and Motor Vehicles department show.
Braman’s dealership in West Palm Beach carries Rolls-Royce, Bentley, BMW, MINI and Porsche automobiles and is ranked third in success from over 17,500 dealers of these vehicles nationwide for the past five years, according to the trade journal WardsAuto.
The newly redesigned 35,000-square-foot dealership had no problem hosting the 600-plus people in attendance of its grand opening party April 4. Included in that space are 26 air-conditioned service bays and designer boutiques and sales offices.
“Our goal with these new stores is to build the most luxurious yet functional dealership in the country,” said Stephen Grossman, general manager of the Braman dealership. 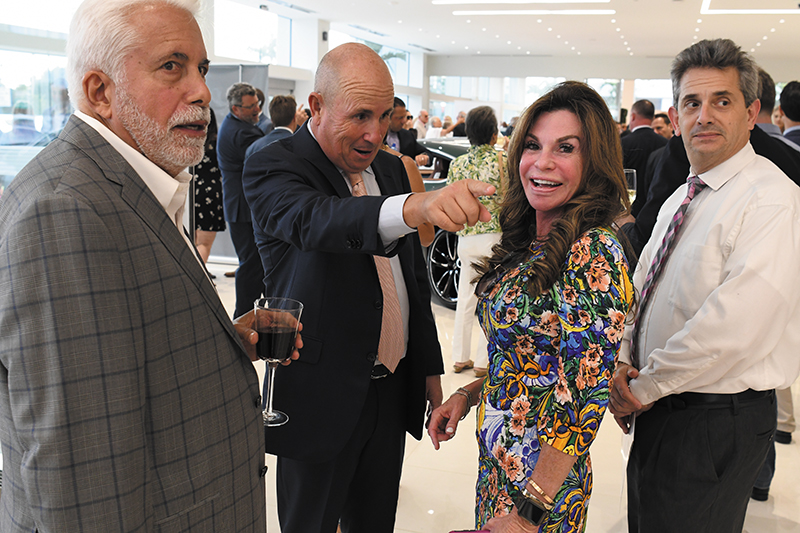 Winners of the 14th annual Bernays Awards have been announced by Debbie Abrams, president of the Gold Coast PR Council, after a luncheon in West Palm Beach on April 16. The council, a South Florida association of public relations, communications and marketing professionals, has given out these awards since 2005 honoring excellence in local public relations campaigns, marketing programs and media coverage.
The Presidents Award went to the South Florida Sun-Sentinel for its coverage of the Parkland school shootings and the aftermath — for which the newspaper also was awarded the Pulitzer Prize for public service. Publisher Nancy Meyer, Editor-in-chief Julie Anderson, Managing Editor Dana Banker and assistant Managing Editor Gretchen Day-Bryant accepted the award.
The organization’s Founder Award went to Debbie Wemyss. Ali Soule was named PR Star, and the Judges Award went to Moore (formerly known as the Moore Agency).
Other winners were: PR Czar in the Small Nonprofit Campaign category; Cultural Council of Palm Beach County in the Large Nonprofit Campaign category; Tilson PR in the PR Campaign/Large category; Kaye Communications in the PR Campaign/Small category; Constitutional Tax Collector Palm Beach County in the Internal Communications category; Florida Atlantic University in the Crisis Communications category; The Buzz Agency in the Social Media Campaign/Nonprofit category; Labor Finders International in the Social Media Campaign/For Profit category; Tenet Physician Health Services in the Blogger/Digital Influencer category; Clerk and Comptroller Palm Beach County in the Special Event category; city of Boynton Beach, Public Communications & Marketing Department, in the Marketing Material/Print category; Community Foundation for Palm Beach and Martin Counties in the Marketing Material/Video or Digital category.

As the Central Palm Beach County Chamber of Commerce’s Young Entrepreneurs Academy class came to an end, its winner was named. The business was Hykit, an in-house stadium and venue food delivery service created by Lake Worth High School junior Rachel Bailey and senior Weidmayer Pierre. They will go on to New York as their school and district representatives.

In March, the South Florida Manufacturers Association announced its runners-up and finalists for its Employees and Manufacturers of the Year awards. Companies were judged on leadership, strategy, customers, knowledge management, workforce and operations. Boca Raton companies that were honored included HABCO and The Nature’s Bounty Company.

The Boca Chamber’s Business Awards Luncheon, May 24 at Boca Raton Resort & Club, will honor three people who exemplify business excellence in their communities and have a strong philanthropic involvement. Also coming up is the Boca Chamber’s annual Golf Classic, which will host 36 teams June 3 at the Royal Palm Yacht & Country Club. For information, email Chasity Navarro at cnavarro@bocachamber.com.

The Women’s Council of Realtors selected Amy Snook to participate in its inaugural Leadership Institute, which is limited to 15 participants from across the country.

Snook, an Atlantis resident and a partner in the All About Florida Homes team of Keller Williams Realty, has been in the real estate and title insurance business for 17 years and is the Florida state secretary for the Women’s Council of Realtors. She is a director of the Realtors Association of the Palm Beaches and Greater Fort Lauderdale, a director of Florida Realtors, and sits on the executive board of Vita Nova Inc.

A1A Home Watch and Concierge Services, a local company owned by Kerry and Geoff Thornton, earned accreditation for the third year from the National Home Watch Association, which sets the standards for absentee homeowner services. For information, visit a1ahomewatchfl.com.

A 12-bedroom, 23,795-square-foot estate completed in 2018 at 1040 S. Ocean Blvd., Manalapan, has come on the market listed for $39.95 million by Pascal Liguori & Son of Premier Estate Properties. The two-acre property has 200 feet of frontage both on the ocean and Intracoastal Waterway, with the main house and separate guesthouse designed by Yates Rainho Architects. Some features are extensive millwork, Corsica marble and wide-plank walnut floors, a two-story marble foyer, oceanfront clubroom with a wet bar, a theater room, and a 1,100-bottle wine room. For more info, call 866-502-5441.

Recorded on April 10, Leonard Tannenbaum bought Acqua Liana, 620 S. Ocean Blvd. in Manalapan, for $14.25 million from Goldman Sachs Bank. The bank acquired the property in February at a foreclosure auction.

The Boca Bath & Tennis Club home once owned by Blake Wheeler of the NHL’s Winnipeg Jets is back on the market. The owners, who bought the property from Wheeler two years ago, have listed it for $1.425 million with Douglas Elliman Real Estate agent Colleen Newland.
Recently remodeled, the 5,564-square-foot home at 2843 Banyan Blvd. Circle does not have a hockey rink, but it does have a massive outdoor patio complete with TV and summer kitchen; a heated saltwater pool and spa; and lots of green space for recreation and relaxation.
Wheeler, a forward who has played 11 seasons in the NHL, was an All-Star each of the past two seasons. Before this season he signed a five-year, $41.25 million contract extension.

Lang Realty recently gifted the Child Rescue Coalition $5,000 from a percentage of proceeds from its eighth annual Open House Extravaganza. “In addition to raising money and awareness for a great cause, our agents had the opportunity to meet many prospective homebuyers who experienced the Lang difference firsthand,” said Scott Agran, president of Lang Realty.

At the Community Foundation for Palm Beach and Martin Counties’ Founder’s Luncheon at the Kravis Center on May 7, key findings from the 2018 On The Table Community Impact Report will be shared. The report found that housing, economic development and poverty are three of the most pressing issues that need to be addressed. It also identified job training, skills development opportunities, number of good-paying jobs and increased wages as the most important priorities to improve economic conditions.
The keynote speaker will be Carol R. Naughton, president of Purpose Built Communities, an organization working to break the cycle of inter-generational poverty by helping transform neighborhoods. More than 500 board members, donors and fund holders, local nonprofit organizations, corporate sponsors and community leaders are expected to attend the luncheon.
To purchase tickets ($75), call 659-6800 or visit yourcommunityfoundation.org.

The Greater Delray Beach Chamber of Commerce’s Delray Business Expo 2019 is scheduled for 4-7 p.m. May 22 at Delray Beach Arts Garage, 94 NE Second Ave. The event, free and open to the public, is the Chamber’s annual trade show and networking event and will showcase new products, services and technologies. For information, call 278-0424, ext. 105. 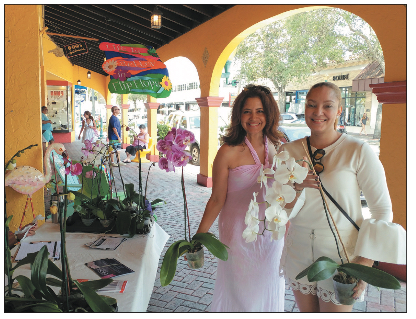 The orchid promotion for downtown Delray Beach shoppers ends in time for Mother’s Day on May 12. Photo provided

Just in time for Mother’s Day is the Delray Beach Downtown Development Authority’s Orchid Giveaway. Until May 11, shoppers can receive one phalaenopsis orchid plant with every $200 they’ve spent at downtown Delray Beach shops, galleries, spas, salons and fitness studios. Orchids can be picked up May 8, 10 and 11 at designated locations. For details, call 243-1077 or visit downtowndelraybeach.com/events/annual-mothers-day-orchid-giveaway, or facebook.com/DelrayDDA.

The HGreg Group, which owns three Nissan dealerships in Canada, opened HGreg Nissan at 2200 S. Federal Highway, Delray Beach, in March. This is its first new-car dealership location in the United States. For this new site, previously known as Delray Nissan, the company expects to invest $28 million and continue to employ about 65 workers.

The Boca Raton Public Library now offers its cardholders free access to Gale Small Business Builder, an online tool that guides users on how to launch a new business.
“Gale Small Business Builder can pull in legal forms, documents, and other relevant content for small-business owners as they go through the process of establishing and building their companies,” said Vicky Fitzsimmons, digital librarian. “This one-stop model saves time they would’ve spent chasing down outside resources and examples.”
Also, small-business owners and entrepreneurs can take classes on how to grow their businesses in Small Business Week at the Downtown and Spanish River libraries from May 6–11.

Jerry Lower contributed to this report.