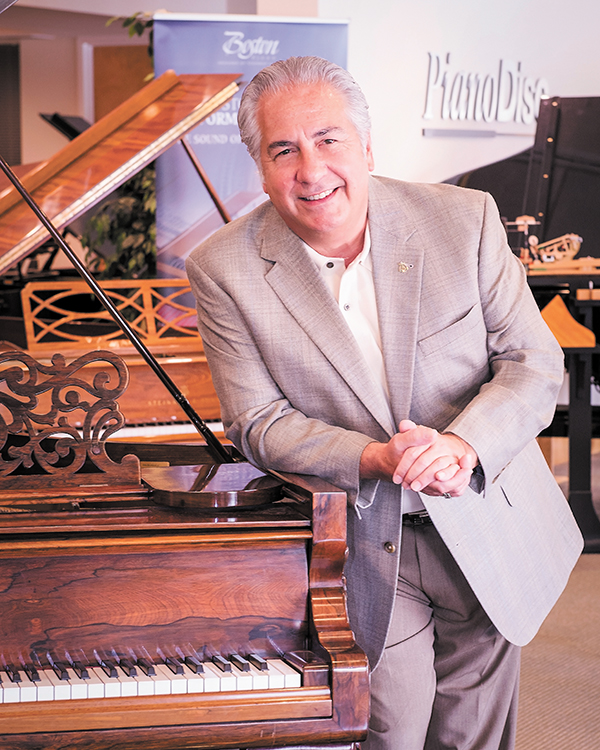 Bob Luptak and his Steinway gallery have been a fixture in North Boca Raton since 1999.

Bob Luptak heard from more than his share of skeptics back in 1999 when he decided on a North Federal Highway location in Boca Raton to open his Steinway Piano Gallery.
“North of Yamato Road at that time was kind of an orphan territory,” he recalled. “The Caldwell Theatre was struggling; the whole area was underdeveloped. I took a chance and invested in a building and created a location that had some presence and identity, that people now refer to as the Steinway building.”
Eighteen years later, Luptak, who came to South Florida after serving as Steinway’s sales and marketing director in New York City, figures his gamble on finding the right spot geographically has paid off.
“Based upon the geography we are responsible for, if you started throwing darts at a map it would make sense for us both to be within reach of northern Palm Beach County and south Broward, and we have that. And we have a nice freestanding building where we could build our own identity. So the building has served me well.”
If there was one aspect of Luptak’s business no one would question, it’s his affiliation with Steinway and Sons. Launched in 1836 by German cabinet and piano maker Heinrich Engelhard Steinweg, the company celebrated 164 years on building pianos in the U.S. on March 5.
“Each one built requires one year and three months of handcrafting in Queens, N.Y.,” said Luptak, who was hired to his New York position by Henry Steinway, the founder’s great-grandson. “It represents the standard of how pianos are judged.
“Not only is the business unique, but the products are unique.”
Luptak concedes that changing times have brought challenges in the business of piano sales.
“When Henry Steinway hired me I remember him saying that the piano business started contracting following the invention of the Victrola,” Luptak said. “Before, everybody had a piano, they would play a couple of songs, have a glass of wine, it was their entertainment. Afterward, all they had to do was put a needle on a record. It took a lot of motivation for people to want to learn.”
Still, many young families retain a desire to have their children broaden their horizons through piano.
In particular, Luptak said, families with European, Latin and Asian backgrounds  as part of their cultural background place a higher value on the process and discipline involved in learning piano.
Luptak plays a role in that process by hosting both school recitals and professional performances in a 70-seat presentation and recital room on the premises.
Upcoming shows include appearances by pianist Leslie Shapiro on April 8, Catherine Lan on piano and Meghan Brachle on flute on April 9, and pianist Jose Lopez on April 22. All performances are at 4 p.m. Go to www.steinwaybocaraton.com for more information.
“We’re doing OK,” Luptak said. “We’re up to 18 years now in Boca and have a lot of beautiful pianos. We hope people will come and meet us.”