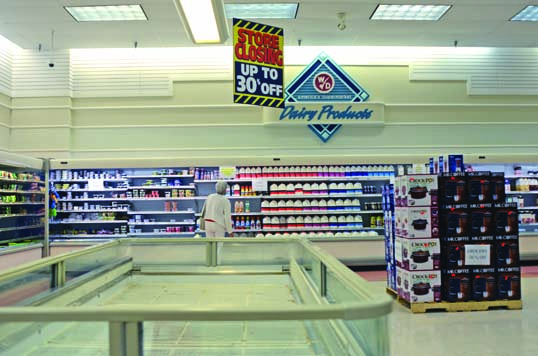 Shelves begin to empty in December at the Winn-Dixie in Boynton Beach’s Riverwalk Plaza.

The store is planned to close by mid-January.

If you shop at the Winn-Dixie in Riverwalk Plaza on the corner of Federal Highway and Woolbright Road in Boynton Beach, you already know the store is closing by mid-January; signs are posted all over it.  But what will take its place?
The process that will answer that question is just starting, said Vivian Brooks, executive director of the Boynton Beach Community Redevelopment Agency. “It’s really exciting for the city. Stay tuned,” she said.
Mid-December, she met with a group from Isram Realty, the Hallandale-based company that owns and manages the shopping center, and next on her agenda, she planned to meet with Boynton Beach city officials to get an idea of options for the space. “Isram wants to optimize the site for water views,” she said.
A little history of Riverwalk Plaza: In 2011, Woolbright Development unloaded it as well as the Shops of Boca Grove, in short sales for a combined $20 million. The sales were at a 44 percent discount off of the value of the properties’ mortgages, according to the South Florida Business Journal. The 81,160-square-foot Shops of Boca Grove, which Woolbright purchased for $17.5 million in 2005, had its mortgage modified at $21 million in 2008. It went for $10 million in the short sale to Isram. Woolbright’s Riverwalk Plaza, which contains a total of 119,199 square feet, in addition to the 3.3-acre site that sits adjacent to it, was purchased for $16 million in 2007. Isram was also the buyer for that property, and paid $10 million in two transactions. Since then, Riverwalk Plaza was renovated with a new paint scheme, landscaping and parking lot resurfacing. To have Delray Beach at your fingertips, check this new app out. Jessica Rosato, a Realtor and luxury property specialist with Nestler Poletto Sotheby’s International Realty, has recently helped launch a free neighborhood app that gives local information specifically tailored to Delray Beach. The app, which can be downloaded from either the Android or Apple app stores, is a community feed as well as a resource for comprehensive information on Delray Beach, from hotels to restaurants to events to real estate. To download the app, visit www.neighbrhds.com.
*** 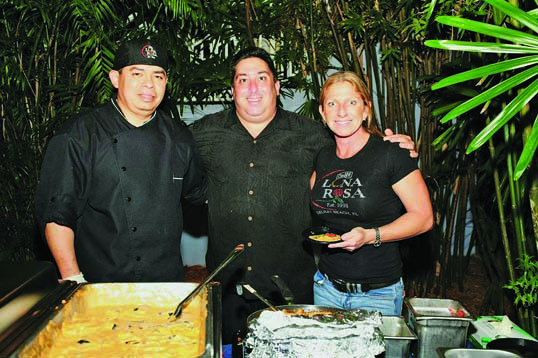 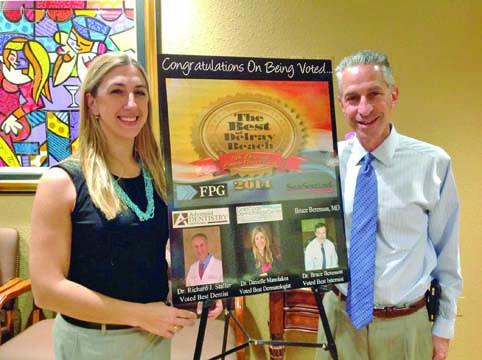 and Dr. Richard Staller (right) was named Best Dentist in Delray by the Sun Sentinel.

Dr. Richard Staller, who donates his services to Florida Atlantic University athletes, was named Best Dentist in Delray Beach by the Sun Sentinel for the second year in a row. He was feted at a reception hosted by his staff at his new offices for his patients and friends. Also recognized was Dr. Danielle Manolakos, who was named Best Dermatologist in Delray. Staller’s new office, Advanced Dentistry of South Florida, is at 15340 Jog Road, Suite 100, Delray Beach. 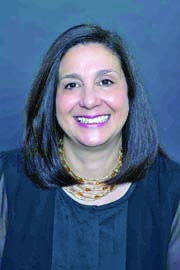 Diamond Award, will be honored on Feb. 20, at the Woodfield Country Club. The chamber bestows Diamond awards to women who’ve achieved success in their professional careers and who continually make a difference in their communities.

Gonzalez’s company, Image360, offers professional graphic solutions to regional businesses and organizations.
Before starting her business, Gonzalez supported Hispanic immigration efforts and advocated for abused and neglected children. In 2013, she won a “Top Places for People on the Move” award from the Sun Sentinel, and she co-created the International Business Alliance. In 2014, she was nominated for the Giraffe Awards by the Women’s Chamber of Palm Beach County.
Currently, she sits on the board of the Boca Raton Children’s Museum, the board of Networking Hispanos and the community academy advisory board of West Boca High School.
***
Boca Raton Regional Hospital’s new Marcus Neuroscience Institute recently treated its first aneurysm patient using the Pipeline embolization device. The minimally invasive procedure treats oversized aneurysms quickly and successfully.
This device, a small stent of cylindrical mesh, is inserted into the vessel. It redirects blood flow and within a few minutes, the grape-like aneurysm shrivels to about the size of a raisin. The stent eventually becomes incorporated into the blood vessel wall like rebar and will hold up permanently.
Over a two-week period, this patient had experienced headaches and lost function in her right eye. An MRI showed a large aneurysm that was forcing the patient’s nerves to go around it, stretching the nerves and creating extra pressure.  After the procedure, her nerves were no longer stretched; her headaches have dramatically improved; and eye function is expected to be completely restored.
***
The Gold Coast Tiger Bay Club has elected five additional directors to its board for 2015. They are Robert Fraiberg, Marshall Isaacson, Sheldon Jaffee, Norka Parodi and Peter Ticktin. The Gold Coast Tiger Bay Club, a nonpartisan political club, meets for lunch on the second Wednesday of every month at City Fish Market, Glades Road and the Turnpike, Boca Raton. Cost is $25 for members paid in advance and $35 for guests paid in advance. Add $10 for those without reservations. Membership is $180 per year. For information, call 852-0000.
***
The Greater Boynton Beach Chamber of Commerce invites the public to its 2015 Great Gatsby Gala, an evening celebrating the 1920s, on Jan. 17, starting with cocktails at 7 p.m., followed by dinner and dancing at 8 p.m. Rico’s Mixed Sounds will provide the music and Fred Astaire Dance Studio is bringing swing dancers.
The gala will be held at Tideline Ocean Resort & Spa-Palm Beach (formerly the Omphoy), 2842 S. Ocean Blvd., Palm Beach. Tickets are $130 each, or two tickets for $200. Proceeds will fund the chamber’s free public events, including the Harvest Fest, Taste of Boynton and Red Hot Festival. For information, call 732-9501.
***
A 13,000-square-foot estate at 3621 S. Ocean Blvd. in Highland Beach — a foreclosure that began in 2008, with a final judgment rendered in favor of the U.S. Bank National Association in September 2013 for $17.8 million — is back on the market for $12.5 million, and is listed by United Realty Group of Boca Raton. The land is zoned multifamily, meaning the lot can be divided into two 95-foot parcels if desired.
The bank, which bought the home at a Jan. 2, 2014, auction for $902,200, sold it on Nov. 13 to 3621 South Ocean Blvd., LLC for $7.5 million.
Some of its history: According to property records, William L. Knight bought the property in 2001 for $5.5 million, and, according to an April 2003 article in Boca Raton magazine, it was one of three Highland Beach properties that Knight and his wife, Beverly, were developing. They called it Casa Bella Riente, and features included a putting green and a Hawaiian fire pit for pig roasts. They planned, at that time, to list it for $15.9 million.
However, Knight failed to sell it, and it went into foreclosure. The private lender of the deal, Rap Knifore LLC, managed by Norman Rappaport, took over the property in October 2008 for $2.15 million. It was put on the market for $16.5 million, but failed to sell.
***
What started as an imaginative idea in August of 2013 has been transformed into the World’s Most Valuable Dreidel, thanks to the skill and generosity of jeweler Pedro Maldonado of Jewelry Artisans in Manalapan.
Shaina Stolik of Chabad of South Palm Beach asked Maldonado if he’d be interested in creating a world-record dreidel with precious metals and gemstones donated by community members to commemorate the confluence of Hanukkah with Thanksgiving in 2013.
Maldonado comes from a family of master jewelers who’ve produced crowns and church artifacts, and he was intrigued by the opportunity to create a Jewish ritual object.
So, Stolik, with her husband, Rabbi Leibel Stolik, appealed to the Guinness World Records Inc. to create custom criteria for the new category: the World’s Most Valuable Dreidel. Guinness responded with specific guidelines as to the value, structure and proof package that the Guinness world record attempt would require. 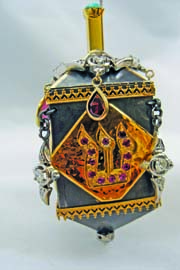 This four-sided dreidel is built on a structure of Tiffany frames, antiqued to contrast with the gemstone-encrusted gold plates that have the requisite Hebrew letters: Nun, Gimmel, Hay and Shin. The apex of the dreidel is antique turquoise. The dreidel spins upon a diamond at its base, and free-hanging diamonds and gems dance and move as the dreidel spins.
“We are grateful to Pedro Maldonado for the extraordinary effort and time that he invested in this project as a donation to the Jewish community,” says Stolik. “We are looking forward to the official Guinness World Record endorsement so that Pedro can have the international recognition that he deserves.”