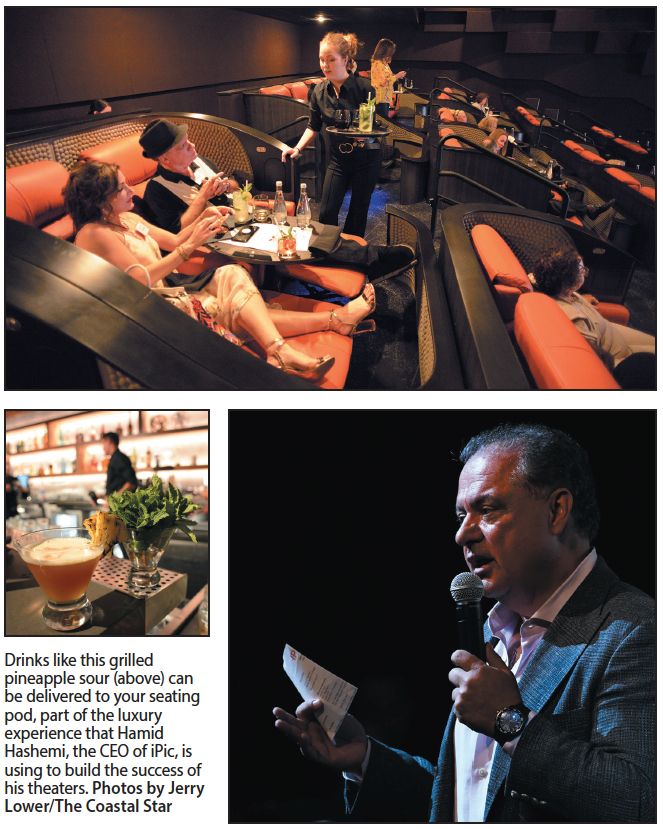 The big reveal for the new iPic Delray movie theater, the city’s first new movie theater in 40 years, was held last month for media and friends.
A showing of 2019’s best picture, Green Book, and a live magic show kicked off the theater’s premiere.
Built by Hamid Hashemi, CEO of iPic Entertainment and creator of the Boca Raton Muvico Theater in 1999 (now owned by Cinemark), the Delray theater marks the 16th iPic nationwide.
“Delray hadn’t seen a new theater in decades,” Hashemi said. “There was a void. We wanted to bring a new form of entertainment to the downtown area. There’s nothing like it here.”
There are eight screens in the building at 25 SE Fourth Ave., with a total of 429 seats. Most of these are in pods — the arrangement of dual leather recliners separated by a swiveling table. A curved partition surrounding each one provides semi-privacy among the booths. Down in front, accommodations are arranged with easily accessible seats for people with disabilities.
Service at all seats includes food and drink delivery, pillows and blankets and complimentary unlimited popcorn.
The theaters also have stages for performing arts and are intended as a “social destination,” promoters said. Oversized contemporary art and green installations by up-and-coming artists chosen by Hashemi fill the lobby spaces in the four-story building, which will house offices and stores, and cover the curved walls around the 326-space parking garage. Valet parking is free to moviegoers for a three-hour time slot.
A cocktail bar is in the lobby area, with food such as lobster rolls, fillet sliders, buttermilk fried chicken and spicy tuna on crispy rice available from a Dine in the Dark menu designed by Sherry Yard, iPic’s chief operating officer. She also oversees the menu at Tanzy restaurant in Boca’s Mizner Park iPic. A rooftop lounge is being considered for the future.
Hashemi also announced he is moving iPic Entertainment headquarters from Boca Raton to offices above the new theater.
Tickets and showtimes are available at ipic.com. Moviegoers can sign up for special access membership programs there, too.

Don’t worry, your favorite spot for crime hasn’t gone far. Just head over to the Delray Beach Public Library, 104 W. Atlantic Ave. There in the library’s retail space, you’ll find Murder on the Beach Mystery Bookstore at its new location.
The independent locally owned store, specializing in mystery, suspense and thrillers, opened in 1996 in Sunny Isles Beach before founder Joanne Sinchuk moved it to Delray Beach in 2002. She and store owner David Wulf both said that they love Delray and are happy to keep Murder on the Beach “in the most fun small town in the USA.”
On the library’s part, “we are thrilled to have them as our new tenant,” said Karen Ronald, the library’s executive director. “There is an exciting synergy between the library and the bookstore. We both attract people who love to read and appreciate great stories. We look forward to celebrating the great joy of reading and collaborating in the future.”
When the Delray Beach Public Library opened in 2006, the retail space was occupied by the Cookbook Café. Most recently, The Buzz Agency operated out of the space from 2012 until fall 2018, when the public relations firm consolidated and moved to its Palm Beach office.

Florida Atlantic University’s College of Business announced a new three-year executive doctorate in business, with focuses on accounting, economics, finance, information technology, management or marketing. To be launched for the fall semester, the program will be offered on weekends with concierge service, and will include face-to-face lectures and presentations, along with supplementary online materials. For information, visit business.fau.edu/masters-phd/phd-program/executive-phd/.

The public is invited to watch the Boca Chamber’s Young Entrepreneurs Academy investor panel competition at 4:30 p.m. April 10. High school students will pitch their business ideas to industry leaders for the chance to win startup money during the program’s annual Shark Tank event. It will be held at Office Depot, Inc., 6600 N. Military Trail, Boca Raton.

The Douglas Elliman Real Estate team of Randy Ely and Nicholas Malinosky of Delray Beach and the Senada Adzem team of Boca Raton were named Pinnacle Club winners for making more than $1 million in commissions in 2018. They were honored during the company’s awards ceremony last month at the Mohegan Sun in Uncasville, CT.

Douglas Elliman Real Estate acquired Manalapan-based Scott Gordon Realty in February. Founder and CEO Scott Gordon has been a Palm Beach County condominium marketing and sales specialist since 1987. He and his wife, Mindy Gordon, with their team of real estate agents, will continue to work at 270 S. Ocean Blvd., Manalapan.

Real estate agents Steven Ochoa and Stephanie Vorcheimer have joined the Posh Properties team at 103 NE Second Ave., Delray Beach. Ochoa, originally from Barranquilla, Colombia, has lived in South Florida for 19 years. Vorcheimer, who grew up in New Jersey, moved to Florida in 1986.

Richard and Eileen Tang purchased the 7,629-square-foot home at 1405 Lands End Road in Manalapan for $5.5 million. The sale was recorded on March 4. The sellers were Thomas and Loren Donino, who bought the property for $6.1 million in 2008. Richard Tang works for Element Capital Management, according to media reports. Previously, he headed North America sales at Royal Bank of Scotland Group. Jack Elkins, with William Raveis South Florida, represented the seller in the deal, and Paulette Koch and Dana Koch of the Corcoran Group represented the buyer.

The Delray Beach City Commission granted final site-plan approval in March for Ocean Delray, the condominium development planned for the Wright by the Sea site at 1901 S. Ocean Blvd. National Realty Investment Advisors and US Construction Inc. plan to demolish the hotel in late April and start construction of the 19-unit Ocean Delray, with an expected end date set for the fourth quarter of 2020. IMI Worldwide Properties is handling sales of Ocean Delray’s units.

Noreen Payne, a partner of the All About Florida Homes team of Keller Williams Realty, was named 2018 Director of the Year by the Delray Beach Chamber of Commerce. Noted for her leadership and commitment to the chamber and the city, she has worked with the chamber’s board members and staff to develop and implement strategic goals focused on service. Payne is the chamber’s vice chair of programming. 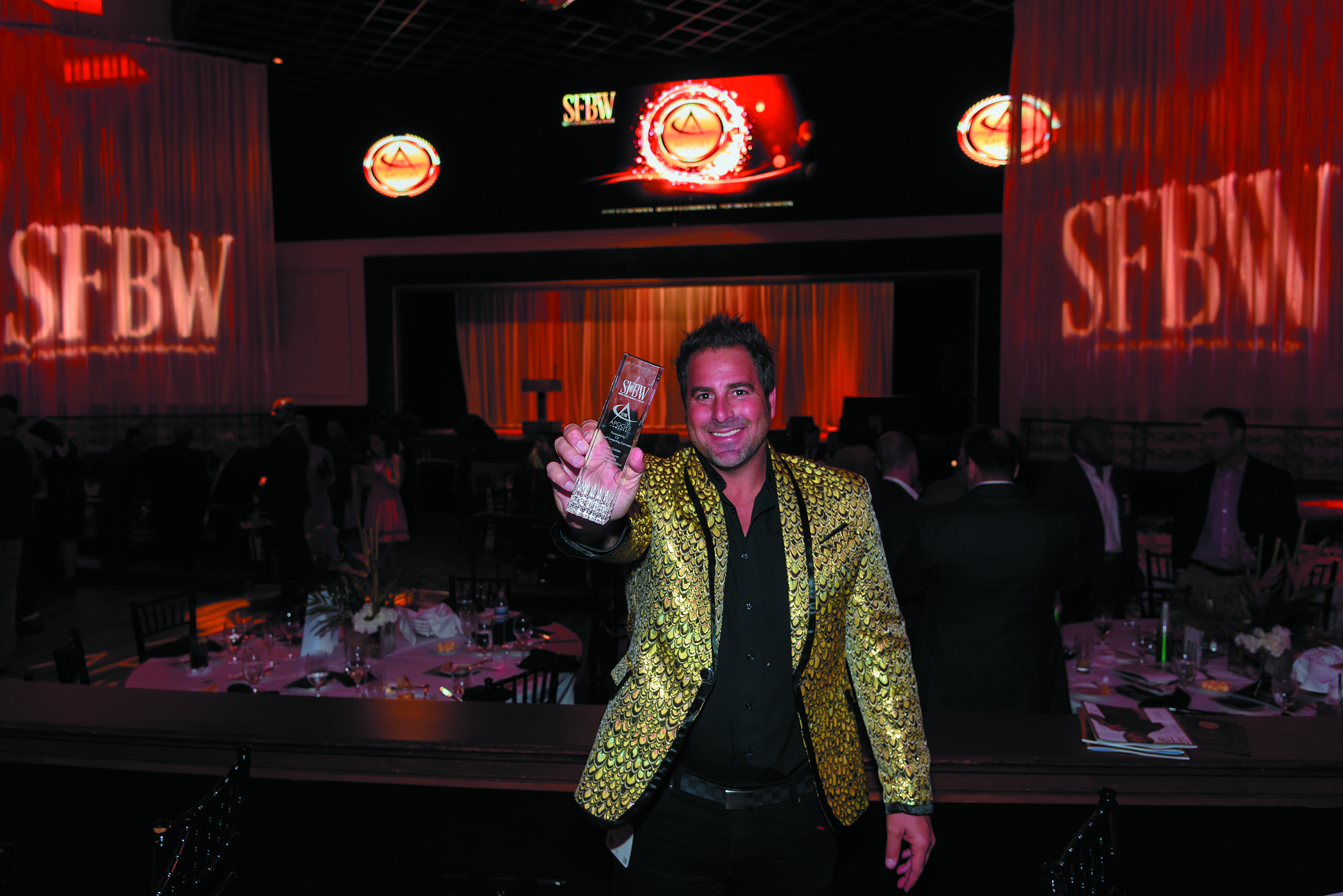 Evan Golden of The Berman Law Group, which has an office in Boca Raton, has been honored by South Florida Business & Wealth magazine with a 2018 Apogee Award as chief marketing officer of the year. The award recognizes his dedication to his occupation, industry and community.
“We incorporate so many local nonprofit organizations in our marketing endeavors and events that desperately need exposure and awareness, so it’s very fulfilling and meaningful work,” Golden said.
Among his professional achievements, Golden was nominated for the Real Men Wear Pink campaign supporting the American Cancer Society. He was also recognized as a South Florida Young Leader in Philanthropy by Simply the Best magazine.
He is the on-air talent for Eye on South Florida, a video production company covering charity events in South Florida.
The award ceremony was held at Gulfstream Park in Hallandale.

Attorney Jay D. Mussman received Day Pitney’s 2019 Coleman Award last month, in recognition of his service and dedication to pro bono work. Mussman, a senior counsel in Day Pitney’s Boca Raton office, leads the law firm’s pro bono efforts in Florida and personally provides pro bono services through the Legal Aid Society of Palm Beach County’s Low Income Taxpayer Clinic, which assists individuals involved in tax controversies with the IRS.
He volunteers with the school district of Palm Beach County, serves as a community board member of the Financial Literacy Advisory Board, and works with Law Without Walls through the University of Miami School of Law.
Day Pitney LLP has more than 300 attorneys, in Boston, Connecticut, Florida, New Jersey, New York and Washington, D.C.

David Dweck’s Boca Real Estate Investment Club celebrated its 25th anniversary in February, with more than 100 guests attending. Money raised from the event will go to Boca Helping Hands, and to send an American military member to Israel through Heroes to Heroes. Dweck, with developer Frank McKinney, conducted an auction that raised money to build 10 homes in Haiti for the Caring House Project Foundation.

Chad Ruggiere, vice president of business development and marketing, announced that The Big Apple, 5283 W. Atlantic Ave., Delray Beach, has undergone a $5.5 million transformation into a mini-mall. It has new signage, landscaping and parking lot, and its interior design was created to be like the streets of New York City. The building, comprising 35,000 square feet, will house more than 65 specialty shops.

The Altman Cos., developer of rental apartment communities, partnered with Habitat for Humanity of South Palm Beach County for its 2019 Home Builders Blitz. And a blitz it was. Donating more than $180,000 in materials and professional labor, The Altman Cos. broke ground on the Delray Beach Habitat home just east of I-95 on Feb. 13, and construction began March 11, with its completion set for the end of March. The house will belong to a single mother, a registered nurse, and her son.

Athena’s Fight Club, a new gym franchise for women and children of both genders aged 13-15, will celebrate its grand opening 6-9 p.m. April 17, at 127 NW 13th St., Suite 2, Boca Raton.
Classes will include resistance band training, motivational exercises and boxing exercises. The first 100 members may enroll for free and will receive a $100 gift bag filled with boxing gear.

Jan Norris contributed to this column.