Delray Beach developer Frank McKinney unveiled his $17.5 million, 7,850-square-foot furnished estate home at 3492 S. Ocean Blvd. in South Palm Beach on May 23. He’s calling this his “final masterpiece,” and he shared changes he’s seen in Florida real estate over his 30-plus years in the business.
“A lot of trends that start at the top trickle down and make their way into the everyday home,” he said. “Examples include granite countertops, stainless steel and the under-the-counter coffee makers. Three decades ago, these features could only be found in luxury homes; today, they are a must in nearly every home, thanks to demand and cost reduction.”
McKinney said luxury homes are smaller today, ranging from 5,000 to 9,000 square feet, as buyers purchase their third or fourth homes. But they still expect the homes to be high tech.
Buyer demographics have also changed, he said. “Today’s luxury buyer is 10 years younger than they were when I first started creating homes. They are self-made millionaires and are rarely purchasing their primary home.”
Features in McKinney’s latest home include a tropical design with lots of theatrical pizazz — azure-blue lava kitchen countertops from France, a three-story glass elevator encased on the first floor by a wine room and bar, a jellyfish tank, a 50-foot resort-style pool, a rooftop lounge, and a cascading water wall and reflecting pool.
One hundred ninety guests were invited to attend the official launch event at the house. Tickets were offered at $200, with proceeds to go toward building 10 concrete homes in Haiti as part of McKinney’s Caring House Project.
The home is listed by Steven Presson, an agent with the Corcoran Group. 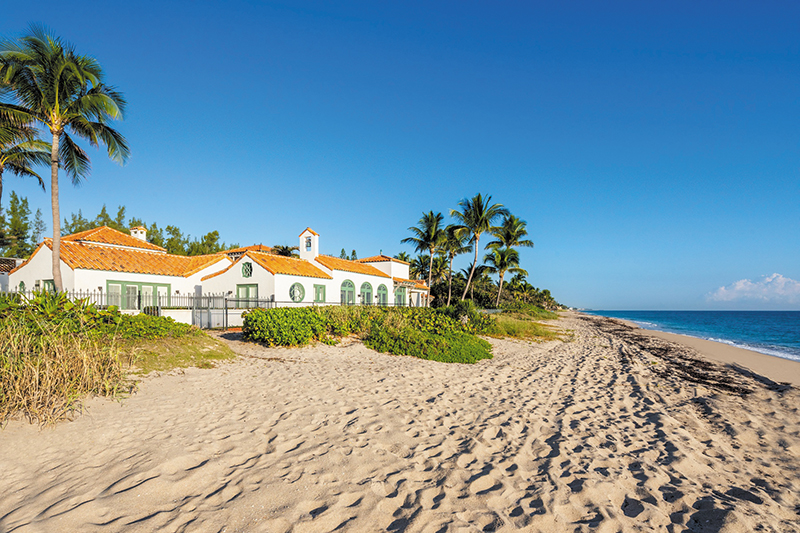 A buyer paid $10.5 million for this 1926 estate in Gulf Stream. Photo provided

In May, Boston hedge fund executive Michael Rashes and his wife, Dena, bought a 12,623-square-foot-home at 2817 N. Ocean Blvd., Gulf Stream, for $10.5 million from Francine Duberry Mulliez of Delray Beach. Built in 1926, the three-bedroom house with four guest villas sits on 1.2 acres. Candace and Phillip Friis of the Corcoran Group represented the buyer and seller.
Candace Friis said that this is the third family to have owned the house, which last sold for $12 million in 2008.
During the time the house was developed, Gulf Stream was an equestrian polo community. Homes had bells that could be rung at cocktail time, and this home still has the original bell, she added.
The home was redesigned by the architectural firm Bridges Marsh, and details include imported marble, limestone floors, cypress cathedral ceilings, two fireplaces, an oceanside office, a master bath with private courtyard and a rooftop terrace. 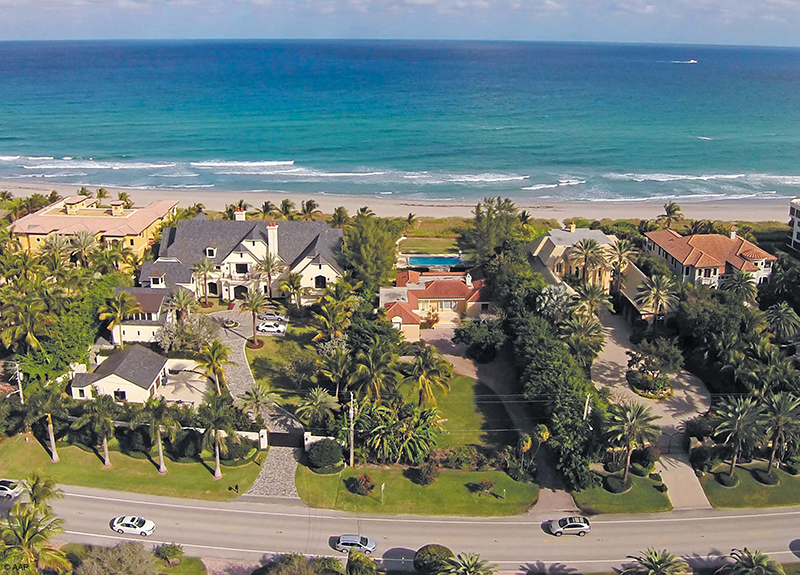 An $8.2 million sale of this Highland Beach property was nearly a record price. Photo provided

Brian and Jennifer Kessler bought 2475 S. Ocean Blvd., Highland Beach in April for $8.213 million. The seller was Frances Yu, trustee of U Trust. Pascal Liguori of Premier Estate Properties represented the buyers, while Jeffrey Cohen of Douglas Elliman Real Estate represented the seller. U Trust paid $5.3 million for the property in 2005. This is the second-highest sale price for a knockdown/land value deal in Highland Beach, following the $11 million sale at 3621 S. Ocean Blvd. That sale closed in December 2015, and the home was demolished to make way for the 3621 South Ocean townhome project, according to Douglas Elliman.
“This sale price represents a new standard for oceanfront land value in Highland Beach,” Cohen said. “It is reflective of the area’s building and zoning codes, allowing an owner or developer a more generous building and a level of architectural autonomy which you will not find in most coastal towns.”

After buying a second property in Boca Raton’s Royal Palm Yacht & Country Club community to live in, Steven and Rebecca Scott sold their 8,570-square-foot spec house at 271 W. Coconut Palm Road to Mark Kaplan for $11 million. Rebecca Scott paid $2.1 million as an investment for the lot in 2002.
SRD Building Corp. built the five-bedroom house in 2018. David Roberts of Royal Palm Properties represented the Scotts, while Jeannine Morris and Blake Morris of the Morris Group with Lang Realty represented the buyer.

In May, Key International and Integra Investments launched sales at the Boca Beach House, a four-story, 32-unit development at 725 S. Ocean Blvd. in Boca Raton. Ground breaking is expected next year, and the development is estimated to take two years to build. The company bought the 3.2-acre waterfront site from Boca Lake Parcel LLC, a subsidiary of Blackstone, in 2017 for $17.3 million. Sales will be handled by Key International Sales. Preconstruction prices for the two- to five-bedroom units range from $2.5 million to $8 million.
Sieger Suarez Architects is designing the building; Linda Ruderman is handling the interiors; Raymond Jungles is designing the landscaping.
Buyers at Boca Beach House will gain free one-year memberships at the Boca Raton Resort & Club. For more info, visit www.bbhresidences.com or call 305-377-1025.

Alina Residences Boca Raton, at 300 SE Mizner Blvd., broke ground on its first phase in March. The project, according to a news release, will have 121 condominiums priced between $1 million and $6 million.
Boca Raton-based El-Ad National Properties is the developer. Moss Construction is the general contractor and Garcia Stromberg/GS4 Studios is the designer.
The first phase is expected to be completed in the fourth quarter of 2020. By then, the second phase should have begun. The entire 8.8-acre site was approved for 388 condos.
Douglas Elliman is the broker.

Steven Newman, who was featured on CBS’s Undercover Boss while he was CEO of Loehmann’s, recently launched sales of Eden Ridge in Boynton Beach, with builder Aldo J. Kosuch and architect Gary Eliopoulos.
Eden Ridge, at 3479 S. Seacrest Blvd., will have eight homes ranging from 2,800 to 4,130 square feet. Preconstruction prices range from just under $1 million to $1.5 million. Newman plans to break ground on two spec homes at the project this summer, while the developers begin building the street and installing infrastructure.
Property records show Eden Ridge LLC paid $1.1 million for the 2.8-acre site in May 2017. Maureen Murtaugh, at 289-1000, and Cheran Marek, at 870-8855, agents with Douglas Elliman in Delray, are handling sales and marketing.

Menin Development, a firm led by Craig Menin, secured a $29.75 million construction loan from City National Bank of Florida in April for its planned 120,000-square-foot mixed-use project Delray City Market, records show. In 2018, Menin bought the site at 33 SE Third Ave. from the Morton Group, which had planned to build Metropolitan at Delray, a 48-unit boutique condo project.

Christel Silver, broker/owner of Silver International Realty in Delray Beach, has launched a new company, Silver International Referrals 2 LLC. The company is geared toward agents who want to keep their Florida real estate licenses but are not actively listing and selling. For a fee, they may hang their licenses with Silver’s new company and give referrals and accept referral fees.

CGI Merchant Group, which owns Nexus Workspaces, announced the opening of two new Nexus Workspaces co-working offices, in Boca Raton and Boynton Beach. The Miami-based private equity firm bought the properties for a combined $9.4 million in February, records show. Nexus BocaRaton is a 44,000-square-foot Class A office space with more than 100 office suites at 20283 S. State Road 7, with 86 percent occupied, according to a news release. Nexus Boynton Beach is a 15,262-square-foot Class B office space at 1375 Gateway Blvd. It has about 70 suites with over 50 percent occupancy.

Seed, a co-working alternative for business people, will open a new 6,000-square-foot workspace on the second floor of a retail office building at 660 Linton Blvd., Delray Beach. Pre-leasing for Seed opens in mid-July, and the grand opening will take place in late summer.  The workspace will have 58 co-working desks, 14 executive offices, private meeting spaces, and several open-space areas including a lounge and a reception center. For more info, visit www.WorkAtSeed.com.

Southern Development Services, a Delray Beach commercial development firm, has opened a self-storage facility with 500 units at 1125 Wallace Drive. The property is managed by CubeSmart.
“With the continuing growth of Delray Beach, there is an increasing need for these types of facilities,” said Jim Zengage, a longtime coastal Delray Beach resident who is president of Southern Development. “This is a booming sector of the real estate industry for good reason — people need a place to put their belongings.”

Title Alliance, a title insurance and escrow company, held its second Gives Back Week in April, a program in which the company’s employees across 10 states and 54 offices volunteer in the community for a favorite cause or initiative.
In Boca Raton, team members from Title Alliance of the Palm Beaches each volunteered a half-day with Kindness Matters, an anti-bullying campaign.
“All our dedicated and enthusiastic employees were thrilled at the chance to combat bullying,” said Lisa Douglas, regional operations manager at Title Alliance of the Palm Beaches. “Not only did they get to work together while volunteering, bringing the team closer together, but they also found inspiration working so closely with the community.” 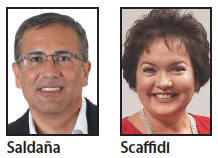 After winning more than $1,700 from investors to put into her business in the Boca Chamber Young Entrepreneurs Academy Investor Panel Competition, Rhea Jain went to Rochester, N.Y., in May to compete against other young entrepreneurs from around the United States, China and India. She pitched her upscale petite clothing line, Renoosh, which has a pay-it-forward twist, and was one of six who made it to the Rochester finals.

Delivery Dudes, a company that delivers food from local restaurants, has begun giving customers the chance to opt out of receiving plastic-ware when they put in their orders for food delivery.
Delivery Dudes partnered with 4ocean, a local company created by Andrew Cooper and Alex Schulze that aims to inspire individuals to work together for a cleaner ocean.
“The planet is awesome and we have to stop polluting it,” said Jayson Koss, Delivery Dudes chief executive officer.
Delivery Dudes, headquartered in Delray Beach, has more than 50 locations in Florida, Tennessee and Pennsylvania.