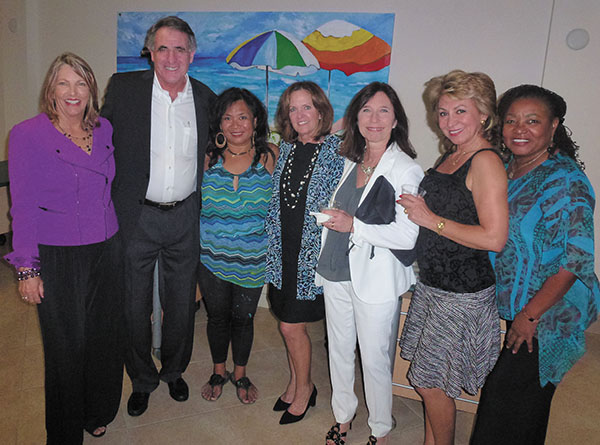 Following last year’s acquisition of Manatee Cove Realty, Terra Holdings/Brown Harris Stevens celebrated the grand opening of its rebranded office at 619 Lake Ave., Lake Worth, in conjunction with an opening of artist Maria Paz’s work in February.
“We are delighted to present the Brown Harris Stevens brand to the Lake Worth community with our new signage and custom window displays,” says Jennifer Spitznagel, senior broker associate and director of the Lake Worth office. “We’ve timed the grand opening so we can include our northern clients who are down for the winter months. We are also very excited that our office will continue to feature a rotation of work by local artists. We are proud to uphold the Lake Worth LULA theme of a town for and about art.”
LULA is the arts district between Lucerne and Lake avenues.

Premier Estate Properties with offices in Boca Raton and Delray Beach was recognized with four Outstanding Performance Awards for 2016 during the Leading Real Estate Companies of the World Performance Summit in March.
The Momentum Club honor signifies an improvement in the company’s focus on serving clients worldwide by making introductions to other Leading Real Estate Companies of the World members. The Pinnacle Award celebrates the firm’s achievement in successfully assisting more clients with their real estate needs, working in partnership with other member firms.
Premier Estate Properties’ other awards were presented in recognition of its expertise in the high-end market for superior performance in overall agent productivity, as well as for its results in assisting clients with luxury real estate needs in far-reaching locations.
The summit was at the Fontainebleau Hotel in Miami Beach and was attended by 2,000 luxury real estate professionals.

The Boca Real Estate Investment Club presents Giselle Cheminand, president and CEO of GCI Worldwide Corp., at the club’s meeting at 7 p.m. April 13. Registration begins at 6:30. It will be held at the Renaissance Boca Raton Hotel, 2000 NW 19th St. The cost is $20. For information, call 391-7325 or visit www.bocarealestateclub.com.

An ocean-to-lake, 3-acre home at 1370 S. Ocean Blvd. in Manalapan has sold for $40 million, according to public records. The seller was a Boca Raton-based limited liability company, EB ESM31 LLC, which is controlled by Edward M. Brown, president and CEO of The Patrón Spirits Co. and a former Seagram executive. The buyer is Borogoves Ltd. of Jersey. The home was rebuilt by the sellers. Previous owners of the 1972-era home included Lois Pope and Frank McKinney. Jack Elkins and Bunny Hiatt, of The Fite Group, represented the sellers. Farid R. Moussallem, of Compass Florida in Miami Beach, represented the buyers.

A 6,500-square-foot, six-bedroom Bermuda-style home at 1500 S. Ocean in Manalapan has come on the market for $34 million, offered for sale through Crista Ryan, an agent with Tina Fanjul Associates Real Estate. Built in 2008, it sits on 1.6 acres with 178 feet of ocean frontage and 139 feet on the lake, offering expansive views of the water from almost every room of the house. For information, call Ryan at 313-1327. The home was owned by Fred Marcon, who died in January.

Krishna and Nirmala Tripuraneni sold “Nirvana,” their Mediterranean-style, six-bedroom, 12,244-square-foot home at 840 S. Ocean Blvd., Manalapan, for $20.23 million on Feb. 23, according to public records. Attorney Rani Newman Mathura was listed on the deed as trustee of the 840 South Ocean Blvd Florida Land Trust, the entity that bought the property.  Douglas Elliman agent Chad Carroll represented the sellers. Corcoran Group agent Jim McCann represented the buyer. Krishna Tripuraneni, a Wellington gastroenterologist convicted of tax fraud in 2015, is due to be released from prison in April, according to the Federal Bureau of Prisons.

Diamond Award winner Susan Saturday (left) and Pearl Award recipient Rebecca Zerbo (right) were honored  at the Greater Boca Raton Chamber of Commerce’s 11th annual DIAMOND Award Luncheon in February at the Boca Raton Resort & Club.
Saturday is senior vice president and chief human resources officer at Bluegreen Vacations and BBX Capital Corp. She currently serves as vice chair on the Chamber’s board of directors and serves on the Golden Bell Education Foundation’s board of directors.
The Pearl Award is given to a graduate of the Chamber’s Young Entrepreneurs Academy. This year’s winner, Zerbo, founded Positive Pocket, a nonprofit organization that offers educational programs for youth and adults who suffer from the negative effects of bullying.

On April 5 student entrepreneurs from the Boca Chamber’s Young Entrepreneurs Academy will present their business plans before a panel of local leaders of industry that include St. Andrew’s School, IBM, Comerica Bank, Bluegreen Vacations and TouchSuite.
In addition to allocating money to the students’ businesses, the business leaders have selected a student business group that will advance to the Young Entrepreneurs Academy Saunders Scholars National College Scholarship competition.

Professionals with more than four years of post-graduate work experience can now pursue an MBA with a specialization in marketing or entrepreneurial management in downtown Delray Beach. Lynn University collaborated with the Greater Delray Beach Chamber of Commerce to host the program in the Chamber’s office at 140 NE First St.
Through online classes as well as classes during the evening, students can obtain their degrees while working. A  degree can be completed in 12 months for less than $30,000.
The curriculum was designed by Lynn’s College of Business and Management. Chamber leaders will lend their network and expertise with guest speakers and executive mentorships to complement coursework. This partnership model is a pilot program for the university.
Applications are due by June 30. The GRE or GMAT is not required for admission. For information, visit www.lynn.edu/DelrayMBA.

The most chatter at the March 27 Lantana Town Council meeting was generated by the news that the 73-acre Water Tower Commons project would include a 44,000-square-foot Walmart Neighborhood Market. The town had hoped for a store that catered to more of a niche market.
Ken Tuma, representing the developer, Lantana Development, said the store wouldn’t be a superstore  — no TVs, luggage or tires in the inventory — but a considerably upgraded Walmart with lots of windows and attractive presentations of organic fruits and vegetables. It’s being designed to compete with Publix.
More news on Water Tower Commons, being developed on land previously known as the A.G. Holley property, is expected April 24 when the town will look at plans for the residential phase of the development.

The retirement community Abbey Delray, at 2000 Lowson Blvd., Delray Beach, has announced plans for an expansion and redevelopment estimated to cost $31.5 million, with construction to start by the end of this year.
Abbey Delray will have a new assisted living and memory care building, fitness center, spa, a new restaurant and redesigned exterior features.
The community offers services to more than 400 residents in 350 homes and villas, as well as onsite assisted living and skilled nursing residences.

Crane’s Beach House Boutique Hotel & Luxury Villas in Delray Beach will offer discounts of up to 30 percent for stays between April 30 and Oct. 5 for guests who reserve before April 11. For information, visit www.cranesbeachhouse.com.

Easton Art Gallery and the Luxury Performance Automotive Group will co-host the Art for Autism Auction from 6 to 10 p.m. April 8.
Artist David Banegas and Biana Pinchuk, a 14-year-old operatic singer and violinist, will provide entertainment. The art auction will benefit the Dan Marino Foundation and Surfers for Autism. It will be held at Luxury Performance Automotive Group, 1800 N. Federal Highway, Delray Beach. Admission is $25.

Mary Thurwachter contributed to this story.