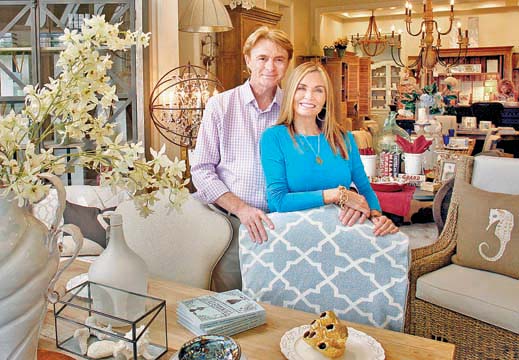 Gulf Stream residents Bernard and Stephanie Molyneux are expanding their

Gulf Stream residents Bernard and Stephanie Molyneux plan to expand their business, ACP Home Interiors/Antiques & Country Pine. Their new 8,000-square-foot store is slated to open Oct. 1 at 850 N. Dixie Highway, Boca Raton.
“I grew up in Boca Raton, and my husband opened his first store in Boca. We are coming full circle,” Stephanie Molyneux said. The couple sells European-inspired, coastal-chic furniture as well as industrial-style furniture.
They also have a boutique at 2050 N. Federal Highway, Delray Beach, as well as a warehouse open to the public in Deerfield Beach. “We offer something a little different in each store, so it’s exciting to visit each location,” she said.

Hate to go grocery shopping? Well, download an app that will arrange Publix Super Markets deliveries, and you don’t have to go anymore. In mid-August, Shipt, a Birmingham, Ala.-based startup, deployed a beta version of its same-day grocery delivery services across South Florida (including Boca Raton, Boynton Beach, Delray Beach, Highland Beach, Lake Worth, Lantana, Manalapan and Ocean Ridge).
Customers can download the app or go to www.shipt.com to sign up for a membership to begin shopping and scheduling deliveries. They can join the app in its beta version for $49 and get one year free of delivery charges on orders over $35. Any items sold by Publix can be included in the order.
Shipt, which is not affiliated with or endorsed by Publix, launched a beta test in Tampa early August, and also has rolled out in Birmingham, Dallas and Nashville.

The Boca Raton Whole Foods Market’s “Donate Your Dime” program aims to help find a cure for people with Crohn’s disease and ulcerative colitis. To participate, bring in your own shopping bag and you’ll have a choice of receiving 10 cents back or donating the dime to a selected charity. “Donate Your Dime” chooses a different charity each quarter, and now through Oct. 1, funds will go to the Crohn’s & Colitis Foundation of America.

Sixty-two physicians on the medical staff at Boca Raton Regional Hospital were listed as “Top Doctors” by Castle Connolly Medical Ltd., a research firm specializing in providing consumers with information about the nation’s best doctors and hospitals. These doctors accounted for more than half of the 116 doctors represented among the 13 hospitals in Palm Beach County.

Delray Medical Center broke ground on its new 120,000-square-foot, four-story patient tower and five-level parking garage, slated to open in early 2017. The $79.4 million expansion will include the addition of 96 private patient rooms, cardiovascular clinic, expanded endoscopy suites and a helipad with direct elevator access to the emergency department.

Some announcements from the South Florida Regional Transportation Authority: Tri-Rail now offers a free shuttle to Palm Beach International Airport from every train that stops at the West Palm Beach station.
Tri-Rail recently introduced its first bike car, a specially equipped Bombardier trailer car, and currently, nine coach cars are being retrofitted with bike racks so that there will be a bike car available on every train. Bicycle lockers are available at all stations with the exception of Pompano Beach and Miami.
Two new well-manicured pet-relief areas have been added on the east and west ends of the Palm Beach International Airport terminal outside the baggage claim, and the airport provides complimentary waste bags so owners can pick up after their pets.

For a healthier vacation, Kimpton’s Tideline Ocean Resort & Spa offers guests opportunities to unwind, rev up and detox at scheduled times throughout the day now through Sept. 24. Its “Morning Boosters” feature complimentary coffee and tea along with Kombucha shots and healthy bites. “Afternoon Iced Tea” in the lobby includes a glass of passion fruit mango tea, garnished with orange Jell-O cubes. Its Kimpton’s signature “Wine Hour” in the evening has a mental wellness twist with sangria and a complimentary evening snack.
Also, hotel guests who mention the Summer of Wellness secret password “farmers market” on the property will score additional complimentary surprises and delights. The resort is at 2842 S. Ocean Blvd., Palm Beach. For information, call 540-6440.

Crane’s Beach House Boutique Hotel & Luxury Villas will host its Sept. 17 Thursday Fun-Raiser for the Plumosa School of the Arts. The food will be from Papa’s Tapas. Open to the public, the event will be held from 6 to 8:30 p.m. at the hotel’s Tiki Bar. Admission, which comes with one free drink ticket, is $20 in advance and $25 at the door. Crane’s is at 82 Gleason St. in Delray Beach.

FLAVOR Palm Beach is back for its eighth September, offering foodies the chance to experience dishes from discounted prix fixe menus at more than 50 Palm Beach County restaurants. They will showcase three-course lunches for $20 and dinners from $30. The Palm Beach County Food Bank will receive a benefit for reservations made through www.FlavorPB.com, and each new UBER rider using the code Flavor2015 will get a free ride and earn the Food Bank $5. For a full list of participating restaurants and menus, visit www.FlavorPB.com. Reservations are suggested.

The Palm Beach Poetry Festival will host the Fifth Annual 100K Poets and Musicians for Change poetry reading at the Bottega Wine Bar at 3 p.m. Sept. 26. A global happening, this free event will take place at the same time in more than 800 venues in 115 countries. Poets are invited to read and perform their work or a poem by another poet that promotes social, political, environmental sustainability, and change. Between poetry readings, guest musicians are invited to play songs for peace. Participants and attendees must be at least 21 years old. The wine bar is at 4455 Lyons Road,  No. 102, in Coconut Creek.

The Greater Boynton Beach Chamber of Commerce Business Expo & Member Mixer will be held from 5:30 to 7 p.m. Sept. 16, at the Boynton Beach Mall, 801 N. Congress Ave., Boynton Beach. The Business Expo is free and open to the public.
Also, the chamber will host its annual Porges Cup Golf Tournament at Quail Ridge Country Club on Oct. 2. Registration and lunch are at 11:30 a.m. followed by shotgun start at 12:45 p.m. A ticket costs $150 for a single player and $550 for a foursome. The country club is at 3715 Golf Road, Boynton Beach. For information, call the chamber at 732-9501. 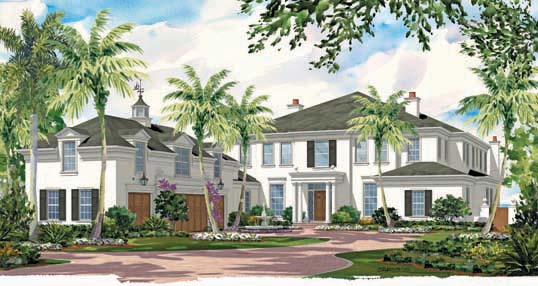 “This is the first spec house in the estate section of Ocean Ridge where a property for a new development has not been available until now,” Ely said. By estate section, he’s referring to this property and a half-dozen of its neighbors, each with a single-family home on 400-foot-deep, direct-oceanfront lots.
This house, which is slated to be completed in 14 months, will be built by Mark Timothy Inc. (principal Mark Pulte), designed by Affinity Architects with interior designs by Marc Michaels.
According to the deed recorded July 7, 6125 North Ocean Boulevard LLC bought the property from Sherry Monroe Broadhead, an individual and trustee, for $5.5 million. Mark Timothy Inc. is listed as the authorized agent for 6125 North Ocean Boulevard LLC.

VRM Companies’ St. George at Delray Beach development, on North Federal Highway one block north of George Bush Boulevard in Delray Beach, went to market in late February, and was sold out by July. Designed by Richard Jones and engineered by Schnars Engineering, the project comprises 38 two-story Bermuda-style townhouses. Featuring two floor plans, the 2,400-square-foot units have three bedrooms, 2½ bathrooms, two-car garages and loft areas.
The project broke ground a month ago and will be completed in about a year. Prices ranged from the low $400,000s to $600,000, with the Corcoran Group handling the sales. A big plus: Each unit will have a two-car garage and driveway, said Corcoran agent Cameron Sydenham.
“Compared to other urban developments where guest parking is a nightmare, St. George has no parking issues. It’s also low density, with only a total of 38 units spread out over three acres.”
The majority of the buyers will be local residents, he predicted.

Because of the Florida Clerks’ significant budget deficit of $22.4 million for the current fiscal year ending Sept. 30, Palm Beach County Clerk’s Office’s courtside budget was cut $2.6 million. To accommodate the shortfall, 41 full-time and 16 part-time positions were cut, and the Delray Beach and Palm Beach Gardens branch offices will be closed to the public on Sept. 4 and 18.

Boca Raton resident Scott Gregory has been appointed as the director of operations for the South Florida Wildlife Center. Gregory most recently served as director of the Great Bend Zoo in Great Bend, Kan. Before that, he was the wildlife director at Calusa Nature Center and Planetarium in Fort Myers.