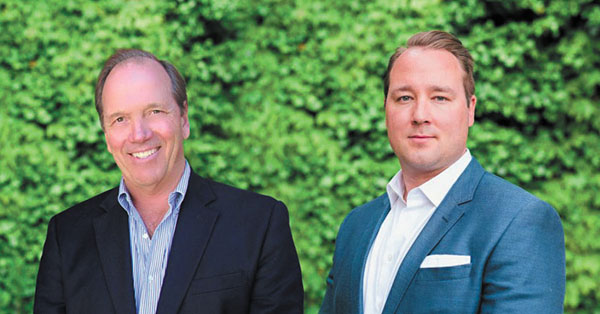 of the brokerage’s international exposure. Their office is in Delray Beach.

Randy Ely and Nicholas Malinosky joined Douglas Elliman in April. A top team in South Florida, the two Realtors accumulated more than $75 million in sales in the first quarter of 2017.
“Their successful track record and stellar reputation in Palm Beach County’s luxury real estate market, combined with their extensive experience and passion, will further the strength and support of the expertise and services we offer our clients,” said Jay Phillip Parker, CEO of Douglas Elliman’s Florida Brokerage.
Ely and Malinosky’s office is now at 900 E. Atlantic Ave., Suite 1, adjacent to the Douglas Elliman Delray Beach office.
Previously with the Corcoran Group, Malinosky and Ely have “nothing but praise to say for Corcoran,” Malinosky said, adding that his team’s business model will stay the same. “We are going to remain in the high-end markets of Manalapan through Highland Beach on the barrier island.
“Our markets are no longer small beach towns. Our clients are from all over the United States and we are dealing with international buyers and sellers, and that’s our main reason for changing. Douglas Elliman has 19 offices in Florida. The firm also has international exposure through its partnership with Knight Frank, which has many offices throughout the world.”
More news from the team: Ely and Malinosky have just listed a new five-bedroom, six-bathroom and three half-bath home at 6161 N. Ocean Blvd., Ocean Ridge, which is expected to be completed in September. With 158 feet on the ocean, the 13,542-square-foot home is listed for $24.95 million. The residence is offered furnished with the exception of secondary bedrooms. Ely and Malinosky’s office number is 278-5570.

Gemini, the Ziff family’s 15.65-acre compound at 2000 S. Ocean, Manalapan, hit the market in mid-2015 for $195 million. In January 2016, the property was listed on the MLS, by Premier Estate Properties agents Carmen D’Angelo, Gerald Liguori and Joseph Liguori. As of May 19, Gemini is now listed by Sotheby’s International Realty agents Cristina Condon and Todd Peter for $165 million. Peter, quoted in The Wall Street Journal, said that the Ziff family hopes the price cut will “attract more buyers,” and that “they feel like it’s an excellent value at this price.”
With 1,200 feet on the ocean and 1,300 feet on the Intracoastal Waterway, the estate offers a 12-bedroom main  residence, two four-bedroom beachside cottages, the seven-bedroom Mango house and a guest or staff house with four studios and apartments. Site details include botanical gardens with 1,500 species of tropical trees and plants, a PGA-standard golf practice area, dock and pier on the Intracoastal, freshwater pond and bird sanctuary, and sports complex with a regulation tennis court, half basketball court, playground, miniature golf course and butterfly garden with a large-scale model train.

Developer Frank McKinney has dropped the price of his 4,087-square-foot micromansion at 19 Tropical Drive, Ocean Ridge, from $3.9 million to $3.43 million. He listed the house in February. It has also been reported that McKinney hopes to start construction by July 1 on a 7,000-square-foot micromansion at 3492 S. Ocean Blvd., South Palm Beach, which will be in the $20 million price range.

NAI/Merin Hunter Codman is headquartered in West Palm Beach and has a regional office in Boca Raton.

Urban retail consultant Robert Gibbs named Atlantic Avenue in Delray Beach one of the top 10 American Shopping Streets in a story for the May 5 edition of USA Today. “Once derisively known as Dull-Ray, this Atlantic Coast town has had a remarkable turnaround in the last 30 years,” the list read. “With literally hundreds of shops and restaurants, 20,000 people can visit in a day,” Gibbs said.
Also, at the Delray Beach Downtown Development Authority’s town hall in April, Gibbs presented “New Trends in Urban Retail Planning and Development,” offering his insight to property owners and developers to help them attract new tenants.

More kudos for the city of Delray Beach: The national nonprofit Kaboom honored the city with a 2017 Playful City USA designation for the second time, as a place that puts the needs of families first so kids can learn, grow and develop important life skills.
Delray Beach was one of 258 communities recognized. In total, these communities have more than 14,000 play spaces that serve more than 4 million children.
“The city values the recreational and leisure pursuits of our residents and visitors and currently has 24 playgrounds located within our wonderful park system,” Mayor Cary Glickstein said. “In addition to our current play spaces, the city is working together with community partners to expand our play space inventory and will install a fitness park and new boundless playground before the end of the year.”

A team of four engineering students took home the top prize at this year’s Florida Atlantic University Business Plan Competition with a system that helps prevent the theft of printed classified or proprietary documents.
Alyssa Harris, Kris Stewart, Quintin Warren and Wesley Klemas founded Protection Against Physical Element Removal, or PAPER, in their senior engineering design class.
Harris, previously a defense-industry intern, had read articles on how to prevent people walking out with pages containing proprietary or classified information, and came up with the idea of tracking pages by printing a radio-frequency identification onto classified documents. Using a nanoparticle ink as a tag, their system can detect documents being removed from the premises.
While classified information is well secured and encrypted, government and large businesses haven’t had a way to secure their printed classified documents, which has led to online leaking.
The PAPER team won a $10,000 first-place prize in the competition, with an additional $1,000 for being named best interdisciplinary team.

The Golden Bell Education Foundation’s inaugural teen fashion show, hosted by Town Center at Boca Raton, attracted more than 100 attendees. The models were high school students from Boca Raton’s public schools.
“This event was all about spreading the message that the Golden Bell Education Foundation exists to provide funding for local public schools, and it felt great to have our efforts recognized,” said Christie Workman, foundation manager for Golden Bell.

Among Palm Beach Poetry Festival winners of the Fish Tales Poetry Contest was Sarah Brown Weitzman of Delray Beach, who was awarded $25 for her poem, Catch of the Day. To participate, writers submitted up to 30 lines of original poetry inspired by photography in the Delray Beach Historical Society’s Fish Tales exhibit, which featured stories, memorabilia, artwork, writing and history on fishing in Delray Beach. All winning poems can be read at www.palmbeachpoetryfestival.org.

The League of Women Voters Palm Beach County, ACLU Palm Beach County and the National Council of Jewish Women Palm Beach County Section are co-hosting “Why Courts Matter 2017.”
Jacqueline Delgado will be the main speaker in “The Role of the Courts in Immigration,” the first event of the three-part series, which is June 13. Delgado, the daughter of Cuban immigrants, is an active immigration lawyer. The free event will be held from 6 to 8 p.m. at The Palm Beach Post auditorium, 2751 S. Dixie Highway, West Palm Beach. The series is made possible by a grant from the Progress Florida Education Institute. 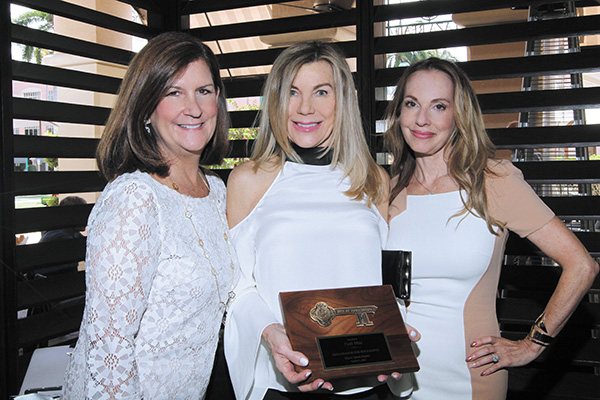 Patti Max, co-owner of Max’s Grille, was named an Ambassador for the City of Boca Raton by Mayor Susan Haynie.  The mayor presented Max with a plaque representing a key to the city during a luncheon at Max’s Grille in April. The restaurant recently celebrated its 25th anniversary. It is at 404 Plaza Real in Mizner Park.

Bark Avenue Hotel and Spa, which until April had offered grooming and retail services only, has added an indoor, climate-controlled dog day-care and hotel.
Beth Chulock of Boynton Beach, one of the original owners, restructured and formed a partnership with Eileen Fleming, a native New Yorker who lives in Ocean Ridge. Fleming previously owned a dog hotel, day-care and spa in Westchester County, N.Y., for 12 years.
Bark Avenue has a custom-built dog play house and cabana-style suites. There’s a senior center with comfy couches, chairs and dog beds.
Dogs are supervised 24/7. For more information on the hotel and spa, at 640 E. Ocean Ave. in Boynton Beach, call 739-8663.