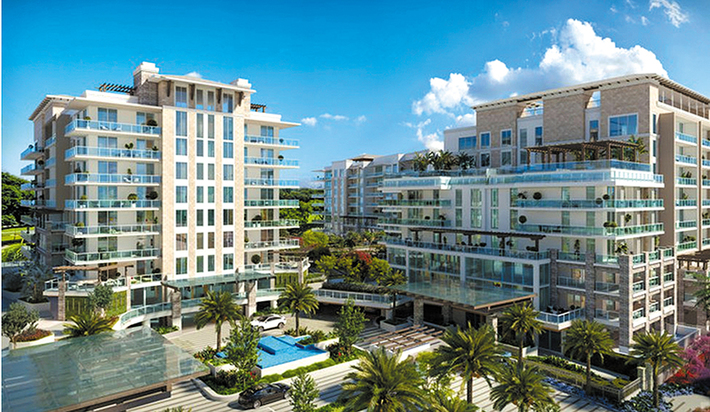 El-Ad National Properties has filed revised plans with the city of Boca Raton for the second phase of its Alina Residences.
The luxury condo project on Southeast Mizner Boulevard was one of the most contentious in the city’s history, drawing complaints from downtown residents in 2015 that it was too massive and a symbol of overdevelopment.
The major change in the second phase is that the number of units has decreased while their size increased to meet market demand as people were forced inside by the coronavirus pandemic and many started working from home.
The project as approved was to include 384 units. Since then, the first phase was shrunk by 10 units and the second phase was pared back to 182 units in two, nine-story towers. The revised unit count in the two phases is 312.
The number of parking places in the garages also has been reduced. Landscaping changes will undergo city review as well. Originally proposed as 500 condos in four towers rising as high as 30 stories, the 9-acre project went through five major redesigns before garnering city approval in 2017.
El-Ad returned to the city in 2018 asking that the project be built in two phases, stirring more controversy until the developer and objectors reached an agreement.
The first phase broke ground in 2019 and opened this summer, with prices ranging from $1 million to $6.5 million. Among the new owners are County Commissioner and former City Council member Robert Weinroth and his wife, Pamela, who closed on their $1.06 million unit in April.
While it was not clear initially how much demand there would be for the condos, that question has been answered. The real estate market is at fever pitch, bolstered by out-of-staters flocking to Florida.
Phase 2 construction is expected to begin early next year, with completion in 2024.

An ocean-to-lake estate on 2 acres at 1120 S. Ocean Blvd., Manalapan, sold in late September for $30.7 million. The buyer is a Florida limited liability company, 1120 S. Ocean LLC, managed by real estate attorney Maura Ziska of Kochman and Ziska. She also signed a 30-year mortgage on the property related to a $16.885 million loan with First Republic Bank.
Built in 1955, the renovated seven-bedroom, 13,876-square-foot house, with 193 feet of ocean and Intracoastal frontage, was homesteaded by Jack Doyle, a former Manalapan town commissioner and mayor pro tem. Known as Chateau Mer au Lac, the estate last changed hands in 2012 for $8.46 million.
Steven Presson, an agent with the Corcoran Group, represented the seller, and the property was listed for $34.85 million in February. Lawrence Moens of Lawrence A. Moens Associates represented the buyer.

Don Hankey, via a limited liability company, paid $29.5 million for the oceanfront mansion at 3715 S. Ocean Blvd. in Highland Beach. The sale was recorded Oct. 13 in public records. The seller, who flipped the property, is Moskow Management Trust, led by Eric Moskow of Las Vegas. The property sold for $21.6 million in March. Hankey heads the Los Angeles-based auto-services Hankey Groups and has a net worth of $5.5 billion, according to Forbes. The seller, Moskow, is a health care investor. The property hit the market in July for $30 million. The price was raised in September to $32 million. Douglas Elliman agent Senada Adzem represented the seller. Samantha Curry, also with Elliman, represented the buyer.

A registered historic home, the Harden-Hart House at 516 N. Swinton Ave., Delray Beach, is listed for sale for the first time at its current location with Cheran Marek, an agent with Douglas Elliman. It is priced at $1.55 million.
Please note the “current location,” because this home, literally, has a moving story.
First owned by John M. Hart and his wife, the 1920s-era Mediterranean-style house was originally located at 326 Pioneer Place, West Palm Beach, before it was moved by barge in 1994 down the Intracoastal to Delray Beach. At that time, it was owned by the Norton Museum, which needed the lot to expand its facility, but couldn’t demolish the house.
That’s also when the current owners, David and Andrea Harden, stepped in, bought it, moved it, and lived in it, up until now. David Harden was the Delray Beach city manager from 1990 to 2013. Here’s how the Hardens took ownership.
In 1993, the Hardens, intending to build a new home, purchased the vacant lot at 516 N. Swinton Ave. from a former Trinity Lutheran Church pastor, the Rev. Robert Klemm. But rather than building new, they decided to buy and move the Harts’ historic house to their Delray Beach lot.
They hired Orlando-based Modern Moving and Wrecking, and on Jan. 24, 1994, Modern Moving detached the house from its foundation, moved it to the Intracoastal Waterway and loaded it onto a barge, where a tugboat pushed it down the waterway to Knowles Park in Delray Beach.
On Jan. 25, it was rolled off the barge into the Knowles Park parking lot, where it awaited arrival of two historic Hillcrest-neighborhood West Palm Beach houses that the Delray Beach CRA had purchased and moved.
On Jan. 31, with the Harden-Hart House leading the way, the three historic homes moved from Knowles Park west on 10th Street to Swinton Avenue, then north on Swinton in what was called a “parade of homes.”  The two other houses are on Swinton in the first block north of Atlantic Avenue.
After the Harden-Hart house arrived at its new location, it was eventually placed on a new foundation and rewired, and the Harden family moved in, in April 1994.
And now, with the Hardens downsizing, the historic house will move onto its next chapter.
“We loved its Mediterranean appearance on the outside, and, in the interiors, we loved the cast-stone fireplace, stylized with lion heads and cherubs. We’ve loved the cove ceilings in the living and dining room, and except for the traditional-style kitchen, the whole downstairs is an open floor plan, which we liked,” David Harden said.
Added Marek, “The Hardens have lovingly cared for this one-of-a-kind home. It’s in very good condition and in a great location near Pineapple Grove.”
For more information, call Marek at 561-870-8855.

Peter Ricci, Ed.D., director of Florida Atlantic University’s hospitality and tourism management program, was recently named South Florida Tourism Professional of the Year by the Academy of Hospitality & Tourism for his response to the coronavirus pandemic. In March 2020, he organized a free online certificate offered by FAU’s College of Business to industry professionals who were furloughed, terminated or had hours reduced, so that they could continue their educations to position themselves for new opportunities.
Ricci thought a few hundred people might sign up for the certificate, which normally costs $899, but it attracted 77,000 people in 165 countries and territories.
More than 61,000 registrants fully completed the certificate — more than double FAU’s full-time enrollment of 30,000 students.
“We were delighted to reach so many people affected by this worldwide crisis,” Ricci said. “Many workers said how grateful they were that the certificate was free at a time when their personal finances were so uncertain, and it helped boost their résumés so they could stand out to employers once the job market opened back up.”

The Seagate, a boutique hotel at 1000 E. Atlantic Ave., Delray Beach, has teamed up with a West Palm Beach interior designer, Paige Padon, to launch Row House at The Seagate. The retail collaboration, which began in September, will run through the end of April.
Guests and locals can shop the collection of hand-selected neutral and textured décor, with pieces that range from coffee tables, credenzas and chairs to ceramics and throws. The collection will rotate regularly and will be limited in quantity.

Shop local this holiday season in downtown Delray Beach, celebrate Small Business Saturday on Nov. 27, and receive a 2021 Delray Beach commemorative ornament while enjoying promotions, entertainment and holiday decorations throughout the downtown.
To take part in the ornament giveaway from 11 a.m. to 4 p.m. on Nov. 27, shop in downtown Delray Beach, save your receipts of at least $200, and receive a hand-painted, limited-supply 2021 Delray Beach commemorative ornament created by local artist Jen Fisher.
The ornaments can be picked up on Nov. 27 at Downtown Development Authority booths located on the beachside at 1047 E. Atlantic Ave. between Amofta by Mahya and Sara Campbell stores, or at 310 E. Atlantic Ave., near Kokonuts Delray Beach and Tootsie’s. The ornaments will be limited to one per customer to the first 200 people.
Receipts must be dated Nov. 26 or Nov. 27, and be from a business within the DDA district. Exclusions include any food or beverage purchases, hotel accommodation receipts, and parking or transportation receipts, as well as any retailer that does not fall within the DDA district.

The Delray Acura, Hyundai and Genesis dealer group has partnered once again with the Marine Corps Reserve to collect unwrapped toys for the annual holiday Toys for Tots drive. Last year, the Marine Corps Reserve distributed more than 20.2 million toys, books and games to more than 7.3 million children.
The public is invited to support this 100% charity initiative and donate new unwrapped toys. Already underway, the drive will run through Dec. 11. Donation boxes are located at the Acura customer service lounge, 655 NE Sixth Ave., Delray Beach.

The Ocean Ridge Police Department will hold its fourth annual Christmas Toy Drop-off in the department lobby through Dec. 17.
The toys will be distributed through the Guardian ad Litem program of Palm Beach County. For more information, call Officer Debra Boyle at 561-732-8331. 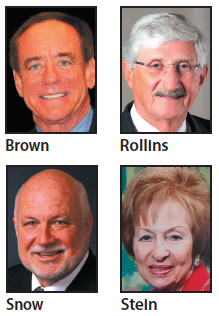 The Boca Raton Historical Society announced its 2021 Walk of Recognition inductees, in honor of people and organizations that have served and enriched the Boca Raton community.
The ceremony and reception will be held at 6 p.m. Nov. 17 at the Addison, 2 E. Camino Real, Boca Raton. The inductees include:
• George S. Brown Jr., deputy city manager of Boca Raton and a former board member of the Schmidt Boca Raton History Museum, who has been pivotal in developing the positive partnership between the city and Florida Atlantic University.
• Robert K. Rollins Jr., president of the Beacon Group insurance agency, who has served on Boca Raton’s Beach and Parks District board for more than 20 years, is past president for both the local Soccer Association and the Boca Raton Rotary Club, and has served on the board of directors of the FAU Foundation. • Edith Stein, co-founder of the Martin & Edith Stein Family Foundation that recently donated $5 million in support of a planned arts and innovation center in Mizner Park.
• The George Snow Scholarship Fund, which is dedicated to helping students within the community to achieve their career goals through the pursuit of higher education. Tim Snow is the fund’s president.
• Also honored at this reception will be 2020 inductees Terry Fedele, the late Jay Van Vechten, and Boca Ballet Theatre.
Tickets, which cost $85 each, can be purchased by emailing office@bocahistory.org, or by calling 561-395-6766, ext. 101.