A Lynn University College of Business and Management class taught by Professor Matteo Peroni created a campaign to boost awareness and fundraising efforts for the 50th annual St. Patrick’s Day Parade in Delray Beach to be held March 17. The students presented their ideas at the Boca Raton office of the public relations firm TransMedia Group and talked about how to implement them with the firm’s client and event organizer, the nonprofit Code 3 Events, Inc. The students’ ideas consisted of raffles for vacations to Ireland, a group fitness event, a pet fashion contest, a beauty contest and a parade founder Maury Powers look-alike contest. This year, the “St. PETricks Day” pet fashion contest was selected to be implemented. To take part, bring your pet dressed up in St. Patrick’s Day attire to Old School Square on March 16. Registration starts at 6:30 p.m. The fee to enter your pet will be $20. Costume categories are: Kiss Me I’m Irish, Lucky Leprechaun and Samrockin Pooch. Winning pets will be featured on the Dezzy’s Second Chance Rescue Float at the parade. For information visit www.stpatrickmarch.com. ;

Victory Media, Military Times and Military Advanced Education & Transition have all named Palm Beach State College to their 2018 lists of schools that best provide veterans, service members and their families with the higher education and support they need to pursue civilian careers.

The college ranks eighth nationwide among two-year institutions on the 2018 Military Times Best Colleges list, and it earned the designation of “Top School” in Military Advanced Education and Transition’s 2018 Guide to Colleges & Universities.

“The college is unique,” said Matthew Watkins, its Veterans Affairs coordinator, “with a total of three veterans resource centers, 16 VA student work-study positions, three student veterans clubs, three veterans-specific academic advisers, and two VA benefits certifying officials. All of our staff members are veterans or come from a military family, and we all feel there is no greater calling than serving those who have served us.”

For information, call 868-3380 or visit www.palmbeachstate.edu/VeteransServices.

The Boca Chamber will host its 12th annual Diamond Award Luncheon on Feb. 23 at the Boca Raton Resort and Club’s Mizner Center, 501 E. Camino Real. The Chamber will recognize a professional woman in Boca Raton and South County who contributes to the vibrancy of the community, Barbara Cambia, executive director of the Hannifan Center for Career Connections at Lynn University.

Cambia serves as chair of the Chamber’s tourism committee and helped launch the first Boca Restaurant Month in September. Under her leadership at Lynn, internship participation has increased by more than 250 percent and freshman engagement by more than 100 percent. She has partnered with the Chamber to create Future Leaders of Tomorrow, a three-week student leadership program.

In addition, the Chamber will honor its 2018 Pearl Award recipient, Skylar Mandell, a graduate of its Young Entrepreneurs Academy and founder of the Florida Sea Turtle Co., which sells bracelets, accessories and clothing at nearly 20 Florida retail locations. Also, her company donates 10 percent of its profits to sea turtle conservation organizations.

For information or to attend, contact Chasity Navarro at 395-4433, ext. 233, or email her at  cnavarro@bocachamber.com.

The Sears department store owned by Seritage Growth Properties at Town Center in Boca Raton is one of 39 nationwide that will close by early April. In a statement, Seritage said that it plans to redevelop the site of the Sears store.

MCA Delray Preserve Owner is an affiliate of Orlando-based Zom Living. IMP Delray is an affiliate of a Boston-based partnership between GID and CalPERS. Zom paid $11 million for the development site in 2015, according to data from Real Capital Analytics.

ESG Kullen paid $7.5 million for 93 residences at the 275-unit Murano, 15005 Michelangelo Blvd., Delray Beach, to USO Norge Murano LLC, an affiliate of Norwegian investment firm Obligo, in December. According to news articles, the New York-based firm plans to renovate and sell them off individually for about $200,000 each starting in June 2019.

MidCap Financial Services provided an $8.4 million loan to cover purchase and renovations. The Obligo affiliate paid $8.8 million for the units in 2009. 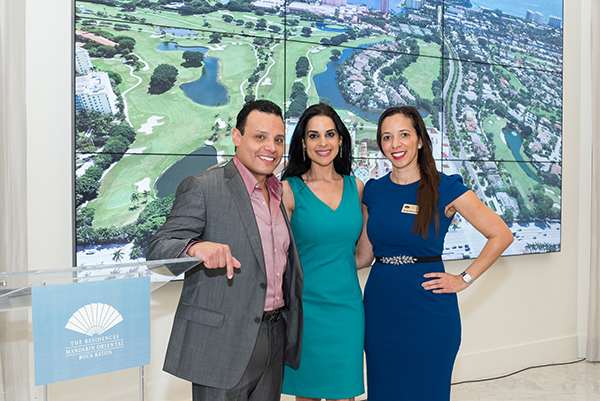 Penn-Florida Cos. recently announced the new sales team for The Residences at Mandarin Oriental, Boca Raton. The team is led by Douglas Elliman Development Marketing’s Elena Christodoulou as vice president of sales. Christodoulou has procured $1.2 billion in sales for luxury pre-construction residences and has been recognized as a leader in luxury real estate sales throughout the world. Joining her as regional sales directors are Marie Mangouta and Alex Murillo.

Demolition of the former SunTrust and Citibank buildings is underway to clear the way for the next phases of Via Mizner, an urban resort in the heart of downtown Boca Raton. With the first phase, 101 Via Mizner Luxury Apartments, already complete and leasing, demolition is the next major milestone in the construction of the next two towers: Mandarin Oriental, Boca Raton, the city’s first five-star hotel in over a decade, and The Residences at Mandarin Oriental, Boca Raton, a collection of 92 private homes. Now at contract, demolition marks the last chance for buyers to secure pre-construction pricing.

The Residences at Mandarin Oriental, Boca Raton, will feature garden suites and an exclusive penthouse collection. Residents will have preferred access to the amenities and service of the Mandarin Oriental.

The Sales Gallery is located at 10 E. Boca Raton Road and is open daily. To schedule a presentation call 922-8335 or visit www.moresidencesbocaraton.com.

The D’Angelo Liguori team listed a six-bedroom, 14,949-square-foot Sanctuary Point estate at 4121 Ibis Point Circle, Boca Raton, in December for $18.95 million. Expected to be completed mid-2019, it is being developed by Addison Development Group and designed by Smith & Moore Architects. It will have views of the Intracoastal Waterway and be on a canal with 345 feet of water frontage, able to accommodate two 100-foot yachts.

And in January, Premier Estate Properties opened its sixth office at 125 Worth Ave., Palm Beach, represented by Jim McCann & Associates.

Jeffrey Ray, broker of Jeffrey Ray LLC, listed an ocean-to-Intracoastal 2-acre property with 270 feet on the ocean, at 1340 S. Ocean Blvd., Manalapan, which is being offered for sale for $43.9 million.

Dave and Margaret Lumia, who bought the property in 2008, built a five-bedroom Mediterranean-style home with 24,054 square feet, as well as a four-bedroom guesthouse with 5,306 square feet, replacing the previous 1960s split-level home of former Xerox CEO Charles Peter McColough.

Stuart Lepera of Leperadise was the builder and completed the estate in 2015. Amenities include posh interior materials, tennis courts, a heated infinity-edge pool, two-story rock waterfall, oceanfront three-story tower, loggia with fire pit, and lakefront dock with water and electricity.

Fashion designer Tomas Maier and Andrew Preston sold their oceanfront Gulf Stream home at 3377 N. Ocean Blvd. for $9.5 million in January to The East Bluff Trust, with David J. McCabe as trustee, according to property records. They paid $7.3 million for the home in 2006. Built in 1980, the two-story house features a pool and 100 feet of ocean frontage. Douglas Elliman’s Nicholas Malinosky and Randy Ely represented the sellers. Broker Jeremy Olsher, of Mizner Residential Realty LLC, brought the buyer. The home hit the market in November for $10.95 million.

For those who want to walk (vicariously) in the steps of a supermodel, here’s your chance. Russian supermodel Sasha Pivovarova, the new face of Christian Dior for its Spring/Summer 2018 collection, is leasing out her Mid-Century-Modern-style home at 1416 Lands End Road on Hypoluxo Island for $70,000 a year.

Pivovarova and her husband, Igor Vishnyakov, an artist, bought their four-bedroom, four-bath house, with 3,800 total square feet, in 2015 as a getaway. Now, though, they aren’t making use of it since their daughter, Mia, 6, has started school, explains Sotheby’s International Realty agent Patricia Towle, who is handling the lease. They’ve made many upgrades, and the house, with custom furniture designed by Todd Hase, can be leased furnished or unfurnished. “What they especially love about the house is the huge banyan tree in the front yard,” says Towle. “It’s probably the largest on the island and there’s a nesting hawk in the tree. The tree is so large that there’s a room inside of it.” For more information, call Towle at 568-9565.

On Feb. 8 at Boca Real Estate Investment Club’s 24th anniversary meeting, club founder and President David Dweck will speak about South Florida’s real estate market. This meeting will be at the DoubleTree Hilton, 100 Fairway Drive, Deerfield Beach. Registration begins at 6:30 p.m. and the presentation starts at 7. The cost is $20 for nonmembers. For more info, call 391-7325 or visit www.bocarealestateclub.com.

The International Festivals & Events Association, which recognizes the world’s best event producers, announced the winners of its annual Pinnacle Awards during a trade show in Tucson, Ariz., and the Delray Beach Marketing Cooperative, along with the Greater Delray Beach Chamber of Commerce, each received a Gold Award.

The cooperative won for Best Newspaper Insert for the 100-foot Christmas tree, and the chamber won for Best Promotional Video for its scavenger hunt.

“To compete against such talented organizations from all over the world makes winning a real honor,” said Jarrod White, event manager of the cooperative.

Added Kim Bentkover, membership director at the Chamber, “We are honored to be recognized with this award from the IFEA, as we put a lot of creative energy, humor, quirkiness and makeup on to create our promotional video for the Seek in the City scavenger-hunt event.”

The food and entertainment event will feature more than 100 garlic-laced menu items, a children’s amusement area with rides, and more than 200 artist and craft vendors. A fundraising source for local nonprofit organizations, the event reached a milestone in 2017, donating more than $610,000.

The Palm Beach Poetry Festival’s 2018 Ekphrastic Poetry Contest is inspired by the “Looking Glass” exhibition, on display through Feb. 24 at the Cornell Museum at Old School Square in Delray Beach. To enter the contest, writers need to submit up to 30 lines of original poetry inspired by one of eight designated images featured in the exhibition.

These are: Five Squares by Chul Hyun-Ahn, Portrait of Joan Agajanian Quinn by Andrew Logan, One Day You’ll Be Mine by Graeme Messer, Muse by Jeremy Penn, Dog /Mirror by Liliana Porter, Outer Reflection by Lilibeth Rasmussen, Façade by Elle Schorr and Invisible Quilt by Peter Symons.

The winning poet will receive a $100 prize, and four runners-up will receive $25 each. The deadline to submit is March 1, and all submissions will be accepted at https://palmbeachpoetryfestival.submittable.com/submit/ 102926/2018-palm-beach-poetry-festival-looking-glass-poetry-contest.

For information and to view the images from the exhibition, visit www.palmbeachpoetryfestival.org/news/looking-glass-ekphrastic-poetry-contest/ The best 30 lines inspired by this objet d’art could win the $100 prize in a Poetry Festival contest. Photo provided