It’s time to introduce the third generation of Richwagens, owners of Richwagen’s Bike & Sport. Welcome 8-month-old Ava, daughter of the store owner Albert Richwagen and his fiancée, Lisa Napolitano. As far as biking is concerned, it’s never too young to start.
“I’ve put Ava on the seat of a bike, and she’ll be riding a tricycle before she can walk,” Richwagen said.
Albert Richwagen represents the second generation in his family business, which his father, Robert, founded 60 years ago. Albert and his mother, Bertha, took over in 1988, after Robert died.
In its fifth location — a 3,000-square-foot store at 298 NE Sixth Ave. in Delray Beach — the business has seen some changes over the years.
A little history: Robert, who learned machine work in high school and during World War II, was a welder at the Boston shipyard. After moving to Delray Beach, he took his skills and ingenuity and applied them to products for his new store, where he sold go-karts and Vespa scooters. A man on the move, so to speak.
“In the 1960s Gidget days, he started shaping surfboards, and then, noticing the number of retirees, he designed a three-wheeled bicycle for adults,” Albert Richwagen recalled.
And things continue to evolve.
“Now, people are loving electric bikes,” Albert Richwagen said. “That side of the business has grown 150% during the pandemic, and kids’ bike sales have exploded, too. The sale of kids’ bikes had dropped steadily over the last 10 years. But when gyms, pools, tennis courts and playgrounds closed during the pandemic, family biking really took off.”
The Richwagen store closed its doors at the start of the pandemic, but offered curb service. It is fully open again. And, by the way, Bertha, 83, misses working there, Albert says.
“She stopped because of the pandemic, but she would be there every day, if she could.”

Two local Delray Beach businesses have sold recently and merged with bigger companies.
On March 11, Delivery Dudes, a food delivery service, sold its assets to the publicly traded company, Waitr, for $23 million. While customers will still visit DeliveryDudes.com, use the Delivery Dudes app, or call 561-900-7060 to place an order, they may notice improvements that should make the service even better, said founder Jayson Koss.
“Delivery Dudes has historically been the underdog in the delivery space, with very limited resources,” he said. “Teaming up with Waitr will give the Dudes access to a wide range of resources including, but not limited to, tech resources, marketing reach and more.”
Koss, along with his team, will remain at Delivery Dudes for the foreseeable future.

On March 9, Architec, a Delray Beach-based company that designs and manufactures product lines for kitchens, was acquired by Bradshaw Home, a national designer and marketer of kitchenware and cleaning products for an undisclosed price. Architec President Jenna Sellers Miller is joining Bradshaw Home’s product development and brand marketing department.
Kathleen Sellers, Jenna’s mother, started a lawn and garden company in 1988, “with plant stands and things like that,” Miller said. “Then I moved home after living in Los Angeles, and in 2000, we started Architec, this new division with a single product, an innovative (nonslip) cutting board. We went off to trade shows, and we were picked up by Linens ’N Things and Bed, Bath & Beyond, then we knew we had something.”
Architec markets five brands: Architec, its flagship line of food prep products; Ecosmart, food prep products made from eco-friendly materials; Homegrown Gourmet, products for growing, serving and storing homegrown produce; Madeira, premium food prep products; and TSP, Totally Sweet Products for baking and decorating enthusiasts.
“Under the Bradshaw umbrella of brands, our future is brighter than ever and I’m pinching myself that I will be joining the Bradshaw team, which means I’ll get to take part in their future success,” Miller said.
Architec’s design and business office is at 350 SE First St., Delray Beach, and Architec’s staff of 10 will continue to work from there.
“Our mission is to support the economic vitality of downtown Delray Beach and we are excited that two of our homegrown companies are benefiting from their success,” said Laura Simon, executive director of the Downtown Development Authority.

Real estate sales have been especially hot this season, crowned locally by the $94 million sale of the Manalapan Ziff estate. Although it was not as huge for the town, a recorded $26.2 million mid-March sale of an ocean-to-Lake Worth Lagoon estate at 1560 S. Ocean Blvd. was significant. The owner was Sarah & Co LLC, managed by Jiri Radoch, CEO of KKCG. The buyer is listed in public records as S. Ocean 1560 LLC, a Delaware corporation.
On 1.4 acres, the seven-bedroom, 11,197-square-foot, three-story estate includes an oceanfront cabana and, on the Intracoastal side, a dock with a boat lift. It connects to the oceanfront through a tunnel under South Ocean Boulevard. The seller paid $16.4 million for the property in 2013 and renovated it throughout the years. It was built in 2011.
According to Realtor.com, the property hit the market in December 2020 for $27.5 million, listed with John O. Pickett III and Cathy Casella of Brown Harris Stevens. Chris Leavitt of Douglas Elliman represented the buyer.

In a March transaction worth $20.4 million, Jean C. Thompson of Dallas sold her estate at 1960 S. Ocean in Manalapan to 1960 South Ocean, a Florida limited liability company. The property is on 3 acres adjacent to the Ziff estate.
Steven E. Presson of the Corcoran Group was the listing agent. In 2018, Thompson, manager of CTRE13 LLC, purchased the property for $13.5 million at auction, when it was owned by William T. Gerrard.

A seven-bedroom, 14,808-square-foot estate at 3715 S. Ocean Blvd., Highland Beach, sold for $21,576,050 on March 10. The sellers were David and Shannon Rae Willens. The buyer was Eric D. Moskow, trustee of the Eric D. Moskow Trust. David Willens is founder and chairman of Sage Dental. Moskow is a health care investor.
The estate, with 120 feet on the ocean, features a living green wall with more than 1,800 plants along the entrance and indoor foyer, its own cell tower, an infinity pool, and interior walls finished in imported basalt lava stone, a transparent wine showcase cellar, two kitchens, a home theater, and gaming spaces.
The buyer was represented by Senada Adzem, an agent with Douglas Elliman. Representing the seller were Gerard Liguori, Carmen D’Angelo Jr., and Joseph Liguori, brokers/owners of Premier Estate Properties, which reported $343 million in sales in January and February 2021.

Charles and Ann Talanian sold a five-bedroom, 10,086-total-square-foot waterfront home at 225 W. Alexander Palm Rd., Boca Raton, to Steven and Tracy Angeli for $12.51 million, according to public records dated March 18.
Charles Talanian is the president of C. Talanian Realty, a Boston-based company, according to its website. Steven Angeli is senior managing director and equity portfolio manager at Boston-based Wellington Management Co., according to an SEC filing.
The Talanians purchased the property for $3.5 million in 2019, records show, and built a new house. According to Realtor.com, Marcy F. Javor with Signature One Luxury Estates represented the sellers, and David W. Roberts of Royal Palm Properties represented the buyers.

Top performers from Boca Raton, Delray Beach and Manalapan were among the honorees as Douglas Elliman announced winners of its Ellie Awards, which honored the firm’s top agents for 2020.
The top 10 teams for Florida by gross commission income included the Senada Adzem team (No. 4), and the Randy Ely and Nick Malinosky team (No. 7). The Pinnacle Club Award winners, presented to Florida agents and teams that made more than $1 million in 2020, included the Adzem team; the Cotilla, Beresh, Gerow luxury team; the Scott Gordon team; and the Randy & Nick team.
Nationwide sales for Douglas Elliman in 2020 totaled $29.6 billion, and the firm was responsible for 46,303 sales and rental transactions. The Florida brokerage closed just under $7 billion in total sales for 2020, up 32% from the previous year.

Daniel A. Hostettler is the new president of the Boca Raton Resort & Club.
A veteran of the hospitality industry, Hostettler was previously president and group managing director of Ocean House Management Collection’s five New England properties. Those include Ocean House in Watch Hill, Rhode Island, and Weekapaug Inn in Westerly, Rhode Island.
As president of Boca Raton Resort & Club, Hostettler will continue his role as North American president of Relais & Châteaux. He is also a member of the Cornell Hotel Society, a trustee of the Culinary Institute of America, and a visiting professor at Johnson & Wales University in North Miami.
Hostettler will oversee all aspects of the Boca resort, including a renovation launched in September. Highlights include a collection of restaurants and bars; a new 4-acre lakefront area with cabanas, four pools and a lazy river; and the reconfiguration and renovation of the tower. 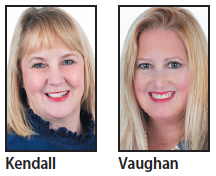 Following a nearly nine-month national search, the board of directors for the Palm Beach County Food Bank has named Boynton Beach resident Jamie A. Kendall as its CEO. In addition, longtime fundraising professional Ellen Vaughan of Delray Beach was appointed as director of development and philanthropy.

The Boca Raton-based Florida Peninsula Insurance announced the retirement of its co-founder and CFO, Francis L. Lattanzio, who will remain with the company as a consultant. Gary Cantor replaces him. Cantor, also a co-founder of the company, served as executive vice president since 2005.

The Festival Management Group, producer of the Delray Affair, has secured a location to hold the annual art show this year, which will be called Affair of the Arts. Scheduled for April 9-11, it will be held on the north side of the Boynton Beach Mall, 801 N. Congress Ave., offering free parking as well as a larger footprint that allows for social distancing.  CDC coronavirus safety protocols will be implemented, and masks are required.
There will be more than 500 art-and-crafts exhibitors and a beer and wine garden. Hours will be 10 a.m. to 6 p.m. Friday and Saturday, and 10 a.m. to 5 p.m. Sunday.