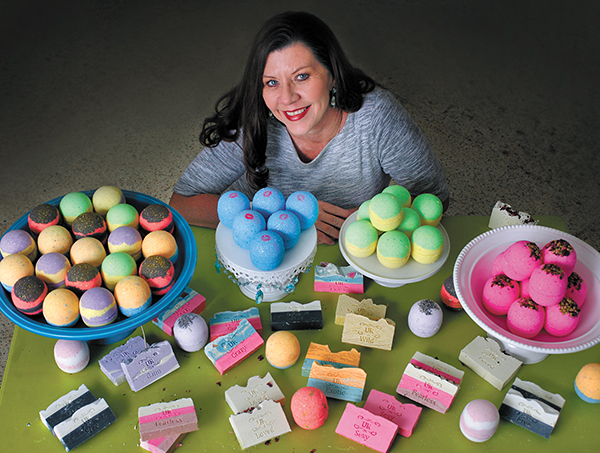 Before she brought her burgeoning handcrafted soaps, bath bombs and scrubs business to South Florida, Tracy Gunn’s story had all the makings of an Emmy-winning, well, soap opera.
Just seven years ago Gunn was a single mother on the verge of homelessness, unable to find work after losing a longtime job in a recession-driven layoff.
Five years later, she was a successful soap-business owner whose entire supply of product was washed away in the rain when a tornado tore the roof off her building.
Not long after that, she was sidelined by shingles.
Through it all, Gunn dusted herself off and rebounded to the point where she now has a thriving business with projected annual sales of more than $12 million. It is tucked away in a small Delray Beach shop on North Federal Highway — The Naked Mermaid Soapery — that is easy to miss, even if you’ve been there a few times.
“I never gave up,” Gunn says. “I wanted it to succeed so much and wanted it so badly that I refused to quit.”
With sales growing at a rapid rate and her wholesale UR Bath and Body business churning out about 10,000 bars of soap, 10,000 scrubs and 8,000 bath bombs a month, Gunn is reconfiguring her 2,500-square-foot store as more of a production facility.
The Naked Mermaid Soapery, however, will continue to exist as a small retail area out front.
“The public can come in and buy our handcrafted soaps and other products and see us actually making it,” Gunn said.
Gunn’s soaps and bath bombs — which add natural oils and bubbles to bathwater — come in a variety of scents and colors unique to her company. They are made with all-natural ingredients and are produced by a team of about six staff members and Gunn, who, when not making soap, is on the road or on the phone reaching out to boutiques and other potential customers.
A Jacksonville native whose father was a horse trainer, Gunn ended up in Oklahoma as a single mom with two boys. She worked for nine years selling pharmaceuticals used to treat large animals such as horses and cows, mostly from a home office so she could be with her sons.
Her sales were good enough to support the family — and then some — until the recession hit. In 2010 her company laid off 400 employees, including Gunn.
“I kept saying, ‘I’ll find another job,’ but I was over 40 and no one was hiring,” she said.
Two months behind in the rent, with only $100 in the bank, she spent $32 to buy soap-making supplies and started the business.
“I was so naïve and so unaware,” she said. “I had no idea what running a business entailed but I wanted to be with my children.”
The work at first took over the house, with the kitchen becoming a soap factory and the living room becoming the shipping area. Gunn made soap during the day and spent her nights sending dozen of texts and other messages to boutiques around the country to offer her products.
Eventually the business outgrew the house and Gunn was able to move it into an older building in nearby Oklahoma City. Then in May 2015, a tornado struck the area.
“I lost everything,” she said.
The stress of having to refund money to customers and trying to rebuild got to her and she came down with shingles.
After weeks of lying on her couch and watching “Blue Bloods” reruns, she decided to try to start the business again — this time in New York City.
Although that didn’t work out, she connected with a homeless shelter for women in the Bronx. While she was there she heard one of the leaders constantly praising women, saying things such as “You are beautiful” and “You are brave.”
That inspired the UR brand and led her to hire 17 women from the shelter for a short time to help her sell soaps at a holiday market in the city.
It was her sons’ athletic abilities that led her to pick up and move to South Florida about a year ago. One son, Laken Hinton, 17, is an aspiring professional golfer whose coach is in Delray Beach. The other son, Logan Hinton, 19, is a hockey player who trains in Coral Springs.
If there is a lesson in Tracy Gunn’s story, it is one of persistence.
“I have failed over and over again,” she says. “You can’t imagine how many times I had run out of money.”
Those days, it seems, have now been washed away thanks to sweet-scented soap.