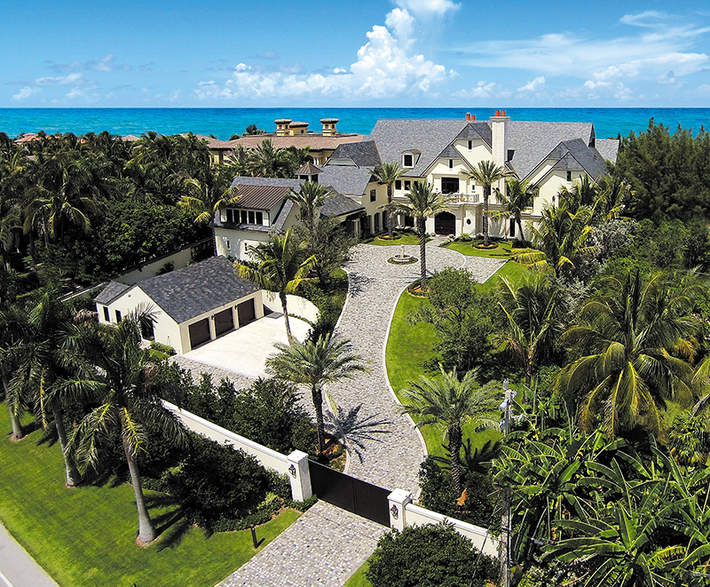 The 23,625-square-foot estate was built in 2014 on nearly two acres. Photo provided by Robert Stevens

Omaha businessman Steve Buchanan and his wife, Samantha, paid $40 million for the mansion at 2455 S. Ocean Blvd., Highland Beach, in a sale that was recorded in public records on April 6. This sale marks a record for the town, surpassing the $34.7 million sale in February of the home next door at 2445 S. Ocean Blvd.
The Buchanans made their purchase with a $30 million mortgage from JPMorgan Chase. Buchanan founded Buchanan Energy and Bucky’s Convenience Stores, which he sold last year to the convenience store chain Casey’s General Stores for $580 million, according to a news release.
The sellers were Bruce Leeds and Marina Rubio Ruiz. The property was purchased for an undisclosed amount in 2011 and the 23,625-square-foot estate was built in 2014 on the 1.88-acre lot with 150 feet of beachfront. The estate was designed by Madey Architects NY, and was built by Mark Timothy Luxury Homes, with interiors by Marc-Michaels.
Jonathan Postma of the Jonathan Postma Group represented the buyers. Ocean Estate Properties’ Bev Aluise Knight represented the sellers.

The 1.43-acre ocean to-Intracoastal parcel at 1260 S. Ocean Blvd. in Manalapan was sold for $40 million by 1260 S. Ocean LLC, managed by Stewart A. Satter, through his real estate company, Carnegie Hill Development. The sale, at a record price for a vacant lot of its size in Manalapan, was recorded March 31.
Buyers were Saltbox LLC and Artemis Realty, both managed by attorney Carolyn S. Nachmias in Burlington, New Jersey. Robert Preston with Carnegie Hill Realty represented Satter. Jack Elkins and Bunny Hiatt with William Raveis Real Estate represented the buyer.
Satter, Manalapan’s vice mayor, purchased the lot in March 2021 for $15.45 million from 1260 Manalapan Properties LLC, managed by Tonio Arcaini. Satter offered the property for sale two ways: vacant, with town-approved house plans and building permits for a 27,000-square-foot estate, which he listed for $42.5 million. He also had it listed for $125 million, with the furnished estate to be executed by the team he often uses for his projects: RWB Construction, Marc-Michaels Interior Design and the Benedict Bullock architecture group.
“Frankly, I would have sold it either way,” he said, adding that the buyer plans to build with his team using his plans with minor changes. “It’s an unusual lot, ocean to Intracoastal in Manalapan, and the buyer saw the value. She will save time with having the permitting in hand and she’ll also save money versus me finishing it and buying a finished project.”
The property drew considerable interest even after this deal went hard, Satter said.
“A couple Realtors said, ‘Hey, I have a buyer who will pay the full price of $42.5 million.’ You never know if those deals would have gone to fruition, but those buyers couldn’t find what they wanted,” he said.
A previous comparable sale price for vacant land in Manalapan occurred in July 2005 when developer Frank McKinney paid a recorded $42.5 million for 8.6 acres with 820 feet of ocean and lake frontage at 700 S. Ocean Blvd. McKinney divided the parcel into five lots for redevelopment.

Dermatologist and health book author Dr. Nicholas Perricone paid $6.8 million for an oceanfront five-bedroom, 5,480-square-foot townhouse, Unit 2, at Ocean Place Villas, 4211 S. Ocean Blvd., Highland Beach, in a sale that was recorded March 29. The seller was Marton Anka, who bought the property in 2014 for $4.6 million. Emily Roberts with Douglas Elliman represented the seller. Mariela Stochetti with Douglas Elliman and Suzanne Petrizzi with Corcoran represented the buyer.

Daniel Shooster and his wife, Leslee, paid $5.6 million for Unit 601 in the first completed phase of the Alina Residences development at 200 SE Mizner Blvd. in downtown Boca Raton. The sale was recorded March 28.
The developer, El-Ad National Properties, sold the four-bedroom, 4,836-square-foot condo. Alejandro Salazar and Rochelle LeCavalier of Douglas Elliman represented the seller. Alex Platt of Compass represented the buyer.
The nine-story building has 102 condo units, 12 penthouses and seven villas.
Daniel Shooster is a former owner of the Festival Flea Market in Pompano Beach.

El-Ad has broken ground on the second phase of the Alina Residences. It will have two nine-story residential buildings and complete the project. The company said Phase 2 was 40% sold and that construction is scheduled to be completed by the third quarter of 2024.
The Alina 210 building will consist of 30 corner residences, with floor plans that include three or four bedrooms plus a den, ranging in size from 3,300 to 5,400 square feet. Pricing starts at $3.5 million.
Alina 220 will have 152 residences of one to four bedrooms with den. These range from 1,400 to 5,400 square feet, priced from $1.7 million to more than $8 million. Douglas Elliman Development Marketing is the exclusive sales team. For more information, visit eladnational.com.

The official groundbreaking of 1625 Ocean — a U.S. Construction development with 10 condominiums and four penthouses on 120 feet of oceanfront in Delray Beach — took place in April. Architect Randall Stofft is the designer.
Of the 14 residences at 1625 S. Ocean Blvd., only one was still available for sale in April. “Our near sellout prior to groundbreaking is more evidence that the South Florida market is still hot, and still very attractive to those from the Northeast, California and residents who already live locally,” said John Farina, CEO of U.S. Construction.
Each unit is named after a musician. The final penthouse, The Sting, offered at $6.495 million, features four bedrooms, 5,000 square feet, terraces, a plunge pool, and summer kitchen. IMI Living is handling the sale. For more information visit www.1625Ocean.com or call 800-755-0358.

After receiving a $100,000 grant from the American Rescue Plan, the Delray Beach Public Library, partnering with the city’s Housing Authority, is distributing 54 GrandPad tablets to seniors at Lake Delray Apartments. A GrandPad is a computer tablet designed for people who have little to no experience with technology.
“The GrandPad project, brought to me by Isabella Rowan, our program coordinator and volunteer manager, has reconnected seniors on fixed incomes with the world” after some lived in isolation during the pandemic, said Karen Ronald, the library’s executive director.  “I haven’t seen my grandson in person and this device lets me laugh and talk with him,” said Phyllis Martin, one recipient. “I have become more comfortable with the technology and I want to thank the library and hope we can continue to use them.”
The grant expires Sept. 30 and the library will need to set up a fundraising program to keep the program going. For information, contact Rowan at 561-266-9490 or isabella.rowan@delraylibrary.org

Ethan Shapiro, head of school at Saint Andrew’s School, was named the Business Leader of the Year during the Boca Chamber’s annual business awards luncheon in March at Boca West Country Club.
Boca Raton Innovation Campus was recognized as the Business of the Year. The Small Business Leader of the Year Award recipient was Erick Solms, president of Simplitfy.
The awards honor entrepreneurs and businesspeople who generate economic prosperity and have strong philanthropic involvement in the community.

Gina Pierre of Amazon Hub Delray received a President Joseph R. Biden Lifetime Achievement Award for being part of the first minority mother/daughter duo to own and operate an Amazon Hub and Amazon counter location in the United States.
“I don’t set out to win awards. But when you receive an award it’s an affirmation. It means that people appreciate what you do. Every award I have received is a confirmation of something I have done, and that motivates me to push a little harder,” Pierre said.
Amazon Hub Delray is at 401 W. Atlantic Ave.

In an annual Mother’s Day promotion, shoppers can receive a phalaenopsis orchid plant with every $200 they spend at downtown Delray Beach’s stores, gift shops, art galleries, spas, salons and fitness studios through May 7. To claim an orchid, bring a receipt dated May 2 through 7 to the front of Global Pursuit at 400 E. Atlantic Ave. or Sara Campbell at 1051 E. Atlantic from 11 a.m. to 4 p.m. May 5-7. Restaurant, green market, hotel stay, food and beverage receipts are not valid.