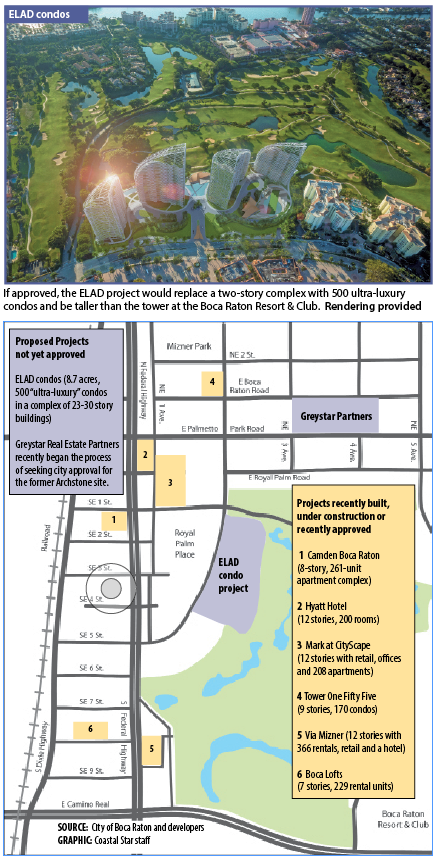 The wait for people yearning to live in downtown Boca Raton is finally coming to an end.
The first downtown apartment complex to be built in nearly a decade, the 261-unit Camden Boca Raton at 131 S. Federal Highway, began opening its doors to tenants in late August. The monthly rents for one- and two-bedroom apartments range from $1,524 to $2,549.
The Mark at CityScape, a mix of retail, offices and 208 apartments at the southeast corner of Federal Highway and Palmetto Park Road, started pre-leasing in August when it already had a list of 400 people expressing interest in moving in. It is scheduled to open in early 2015.
More apartments and condos will be available soon. Major construction is moving forward at three other sites — and last month a 200-room Hyatt won city approval, as well.
The downtown boom, unprecedented in the city’s history, is not yet abating.
In early September, developer ELAD National Properties announced plans to build 500 “ultra-luxury” condos on nearly nine acres on Southeast Mizner Boulevard near the Boca Raton Resort & Club. Plantation-based ELAD has proposed four buildings designed by prominent architect Daniel Libeskind, ranging in height from 23 to 30 stories, and a two-acre public park.
Charleston, S.C.-based Greystar Real Estate Partners, the new owner of the former Archstone site on East Palmetto Park Road between Third and Fifth avenues, wants to go forward with the original developer’s plan to build apartments and retail, and has taken the first step in the process of seeking city approval, said attorney Charles Siemon.

Pent-up demand
The new construction “is caused by pent-up demand,” said architect Derek Vander Ploeg, who is involved with two of the downtown projects. “Nothing has been built (downtown) in more than seven years.”
The projects are boosting downtown property values, which in turn means more tax revenue for the city, said Glenn Gromann, chairman of the Downtown Boca Raton Advisory Committee.
“You can literally walk out your door and be in a vibrant downtown.”
The ELAD condos would average 2,500 square feet, and while prices would be less than those at One Thousand Ocean on the beach, they are “going to be higher-priced than any other condominium that has been built in the downtown,” said ELAD senior executive officer Bill Shewalter.
The project would offer ocean views, add affluent residents and increase both the tax base and demand for downtown shops and restaurants, he said.
It has already sparked controversy since downtown building heights are largely limited to 100 feet. Shewalter wants the limits amended. 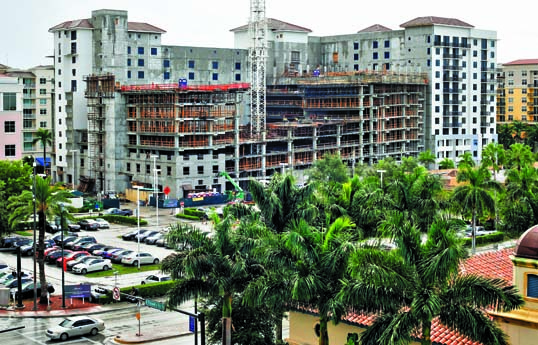 The 12-story Mark at CityScape is under construction at the southeast corner of Federal Highway and Palmetto Park Road in Boca Raton. It will have a mix of retail and offices in addition to 208 apartments. The upscale restaurant chain Del Frisco's Grille will have a restaurant in the new Hyatt set to be built in front of the Mark on the corner of Palmetto Park Road and Federal Highway. The Mark is expected to open in early 2015.

The heights discussion
While most of the feedback from downtown business people and residents has been “very positive,” Shewalter said he is willing to address any concerns.
“The discussion of heights is a discussion that we think should be about understanding what the market is looking for and needs,” he said. “If we are going to bring all these affluent people to downtown Boca Raton, what they want will be terrific views.”
The project density would be about 60 units per acre, a number consistent with other projects approved for the downtown, he said.
But Ann Witte, a financial and economic consultant who lives in Boca Raton, is among a group of residents worried that too much development has been allowed already.
The ELAD proposal is so far beyond the original vision for downtown that when the developer formally requests new height limits, “there will be a very large group of citizens opposing it,” she said.
Mayor Susan Haynie described the proposal as “a developer’s hope and wish,” and one that would not have her support.
“One hundred forty feet is as high as I support going,” she said, referring to interim design guidelines allowing that height in certain places downtown. “There does not seem to be any consensus on the (city) council to allow buildings of that magnitude.”
Before any construction can begin, the project will need approvals from the Community Appearance Board, Planning and Zoning Board and the City Council.
Greystar, a large national apartment management company, closed at the end of August on the nearly six-acre Archstone site. Archstone Palmetto Park sold the site to Equity Residential, which in turn sold it to Greystar in late August for $22.3 million.
Greystar attorney Siemon, a director at the Boca Raton office of the Gray Robinson law firm who also represents ELAD and the developer of Via Mizner, said the company wants to move forward with Archstone’s modified proposal to build a slightly smaller version of its initial plan to construct 378 apartments, townhouses and retail. The city had approved both plans.
Residents, concerned about traffic and noise, challenged the original plan by seeking a referendum, but the Fourth District Court of Appeal in January issued a ruling that allowed the project to proceed.

Modified plans
Plans for Tower One Fifty Five, at the corner of Mizner Boulevard and Boca Raton Road, are being modified to increase the size of what will now be 170 condos, and Vander Ploeg hopes to have both city approval and a sales center on the property before year’s end.
Via Mizner, the first building approved under the city’s interim design guidelines that allow for a 140-foot height, has broken ground on South Federal Highway near the new Trader Joe’s.
Vander Ploeg said he expects the project will soon get a building permit. The developer, Penn-Florida, is working on infrastructure matters and the on-site Citibank has relocated nearby. The project, which includes 366 rentals and retail, also promises a five-star hotel, although Vander Ploeg is not yet divulging its name.
Also under construction is Lennar’s Boca Lofts, a seven-story building with 229 rental units across the street from Trader Joe’s.
The City Council, meeting Sept. 22 as the Community Redevelopment Agency, approved a 12-story, 200- room Hyatt for the southeast corner of Federal Highway and Palmetto Park Road that also will rise to 140 feet.
Construction is expected to begin early next year after the site is no longer needed as a staging area for The Mark at CityScape. Plans filed with the city indicate its restaurant will be a Del Frisco’s Grille, an upscale chain.
“The city is very excited about it because we don’t really have a downtown hotel,” said Gromann of the Downtown Boca Raton Advisory Committee. “It will introduce potential residents to downtown Boca and generate retail shoppers for Mizner Park and Lord & Taylor.”
Yet simmering close to the surface are the concerns of residents like Witte who believe many of the downtown development projects are inconsistent with the low-rise, Addison Mizner-style architecture that has given the downtown its signature appearance.
While downtown business owners tend to support new development because it will bring new customers, “residents have serious concerns about it because of traffic congestion and parking problems,” she said.
They also worry that new rentals will attract transient residents who are “never good for community cohesion,” Witte said. Similarly, she said new high-price condos will attract international buyers who will be part-time residents and little invested in the city.
The ELAD condo project has prompted the bocawatch.org board of directors to “reinvigorate” the website which was created to give residents more of a voice in city government, said Witte, who is a board member.
“It is in gross violation (of downtown height rules) and would require an ordinance written for this project. That is a bad thing for city government to do. It is subject to too much potential for favoritism and even corruption,” she said. 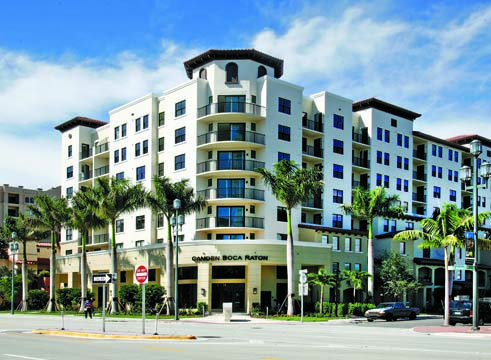 The eight-story Camden Boca Raton, at 131 S. Federal Highway, began leasing in August. It has 261 apartments. Rents range from $1,524 to $2,549 a month. Photos by Tim Stepien/The Coastal Star

Mayor backs development
While Haynie agrees the ELAD project is too tall, she defends other downtown development, saying it has been done under a plan approved in 1988 that considered traffic and many other possible issues.
Downtown growth has caused traffic congestion, but the city is studying several intersections for ways to ease the problem, she said.
“Yes, it is controversial,” she said of downtown development. “Some residents don’t like the density and height. But it is by design. It is the only place in our city where we allow this intensive development.”
The downtown lacks residential projects that will funnel customers to retail, Haynie said. She dismisses concerns about renters, saying “there definitely is a demand for (luxury rental) housing stock” that leases very quickly once it’s available.
She also does not see luxury condos causing problems.
“I don’t really see the climate of having overseas investors and empty buildings,” she said. “I see a lot of people in the downtown enjoying the vibrant lifestyle and walkability it offers.”