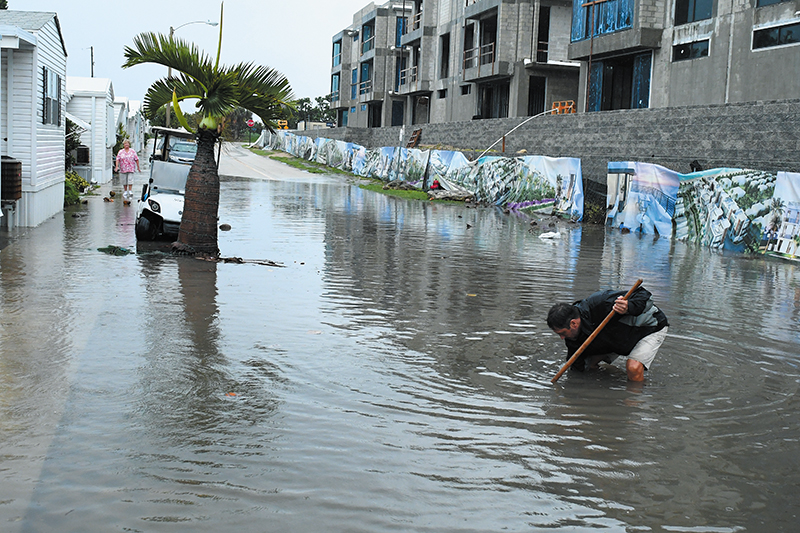 Intense rains the weekend of May 25 flooded many of the town’s roads, including Briny Breezes Boulevard.
Jerry Lower/The Coastal Star

A healthy 11.1% rise in taxable property value means the Briny Breezes Town Council will have more revenue to work with as it takes on several important projects during the next budget year.
Town Manager William Thrasher told the council during a budget workshop on June 25 that the Palm Beach County property appraiser has assessed the town’s valuation at $59.7 million, up from last year’s $53.8 million, the fourth-largest percentage increase among the county’s 39 municipalities.
That’s the good news. The challenging news is that Briny has some bills to pay.
Most notable among them is the cost of doing major maintenance work on the town’s seven lift stations. The pumping units are essential to moving stormwater out of the town and into the sewage collection system.

Thrasher said the lift stations will need an extensive overhaul after many years of service, and they are needed more than ever now because of the new Gulf Stream Views development in the County Pocket that is straining the area’s drainage capability.
“The estimated cost for each lift station is $11,000, somewhere in that range,” Thrasher said, citing evaluations from Harvel Utility Construction, the town’s contractor. “These things are really essential. It’s kind of scary if something malfunctions.”
Thrasher recommended using a $25,000 surplus from last year’s budget to begin overhauling the stations. Council members agreed, and said they wanted to try to complete work on two stations per year until all were restored.
Other significant expenses include $30,000 for a Tallahassee lobbyist to help bring state grant money to Briny and $8,500 to complete work on changes to the town’s charter and put them on the ballot in March 2021.
On Thrasher’s recommendation, the council approved a 9.2% raise to $32,500 a year for Town Clerk Sandi DuBose, who oversees building permit processing. Council President Sue Thaler suggested setting money aside to give Thrasher a raise, but he rejected the idea, saying he didn’t need one and the budget was too tight. The manager, who earns $37,500 a year in the part-time position, told the council to give his raise to the town’s staff instead.
“You help me when you help them,” said Thrasher, who with DuBose started working for the town in January.
Briny will again be capped at the statutory tax maximum of $10 per $1,000 of homeowners’ property value. The town receives about 36% of the cost for fire-rescue and police services from the Briny corporation — an annual total of roughly $417,350 goes to Boynton Beach for fire-rescue and $192,300 to Ocean Ridge for police.

In other business, Bobby Jurovaty, chair of the town’s charter review committee, told the council during its regular meeting on June 25 that he expects the panel’s work to be done by September.
Jurovaty said the goal is to make changes “that are cost-effective and improve the town’s ability to function.”
Since its incorporation as a municipality in 1963, Briny has operated without a formal town charter, relying instead on a hodgepodge collection of resolutions, ordinances and amendments.
The review committee hopes to update existing rules, procedures and definitions and send the revisions to the voters for approval in the March election.