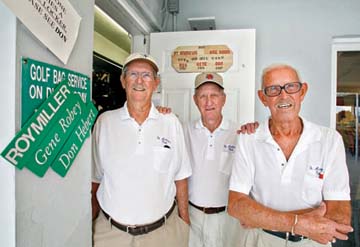 The ‘Over the Hill Gang’ — Roy Miller, Gene Robey and Don Hebert

Golfers and guests arriving at the bag room in The St. Andrews Club are greeted by a homemade sign warning that they are about to be served by:

The Over The Hill Gang

Don’s wife, Jane, made the sign, and she’s an honest woman; but the sign’s not true.

Spend just a few minutes with Roy Miller, Gene Robey and Don Hebert and you see at once that they are clearly on top of things, but still not over the hill.

They are, however, painfully over par.

All three men live in Briny Breezes, all three are in their 80s, and all three have worked in that bag room for an average of 20 seasons.

From November to May, they maintain the members’ golf bags, check out their carts, record their fees, and make sure they’re armed with ice water on sweltering days.

Hebert, 86, came first. The owner of a family supermarket in Somersworth, N.H., he retired to Briny Breezes in 1985.

Warren Bailey, a neighbor who worked at the club, got him a job.

Gene Robey, 81, a retiree from U.S. Steel in Gary, Ind., arrived at the club three years later. Roy Miller, 88, a former supervisor at a Massachusetts rubber company, came in 1995.

You say old folks have memory problems? Don’t tell Hebert. He’ll point to a chart listing the names of about 250 members and associates and say, “Give me a name.”

Call out a name at random, and without looking, Hebert will tell you that player’s four-digit account number. He also maintains all the club’s tournament schedules — who’s playing and when.

When Hebert’s off, Robey takes over, greeting the players, checking out bags.

Miller, the oldest, works seven days a week. Every evening he gathers the balls from the practice range, then washes and rebags them — about 300 every day.

This is not a hobby. The men are paid for their work. They won’t say how much, but note that they’re served lunch. And it’s not the salary that keeps them working well into their ninth decades.

“It’s the people,” they say in unison. “They’re the best in the world.”

The golfers seem to feel the same.

“They take really good care of me,” says Isabel Rich. “They always have my bag on a pushcart and my water ready. They’re dependable, helpful, always here on time, and they have great stories to tell.”

In her nine years at St. Andrews, Rich confides, she’s made three holes-in-one. But improving her game is one service the Over The Hill Gang can’t provide.

None of them plays.

"Years ago, I went out on the practice range,” Hebert recalls, shaking his head. “Too much work.”

So he goes swimming every day at 4:30 a.m. and rides his bike every night instead.

Robey got talked into trying a round once, too.

He dances with the Briny Breezes Square Dance Club instead.

“People ask us for golfing advice,” Miller says, “and we tell ’em, ‘You’re asking the wrong people. See the pro.’ ”

“This coming Wednesday, we have 54 golfers here for a tournament,” Simon says, “and the No. 1 thing is, these men are all extremely dependable. They’re all very polite and cordial with the membership, so it worked out well for me. They’re a really good fit.”

And at 88, Roy Miller has no plans to retire.

And should Gene Robey lose his job, he’s already got a backup.

“I work at the tennis club a couple half-days, too,” he says, and grins. “I don’t play tennis, either.”