Briny Breezes celebrated its 50th anniversary as a town with a banner and a slide show of 800-plus old photos shown on the mayor’s flat screen television at somebody else’s picnic.
The anniversary was March 19. The picnic was March 23.
“Low-key” is how Mayor Roger Bennett described it.
Which is just the way Brinyites, as they call themselves, like it.
Marking the 50th was almost an afterthought by the Town Council. The aldermen decided against extravagantly spending $420 in town money on anniversary lanyards or commemorative refrigerator magnets.
Instead, handouts on homestead exemptions and water conservation were available at a table in the beach clubhouse. The town piggy-backed on the annual season-ending mobile home park picnic and beach party, the last major event before snowbirds head back north after Easter.
After all, the important 50th anniversary was five years ago when residents marked Briny’s birth as a resident-owned corporation. Fearing the mobile home park would be sold, the residents banded together in 1958 and bought the park from founder Ward Miller’s family for $1.5 million.
Three years later they held a mortgage-burning party when the note was paid off. Word is,  that was a real celebration.
But, if creating the corporation was an act of self-protection, then founding the town in 1963 was an act of self-preservation.
In the early 1960s, Palm Beach County had enacted new zoning regulations discouraging mobile-home parks on the barrier island. Getting a minor permit for a cabana took 14 months, Hugh David, the town’s first mayor, told Briny historian Joan Nicholls in a 1995 interview.
“We would have lost Briny,” said Marilyn David, the late mayor’s 90-year-old widow. “We were afraid the county would vote the trailers out and we’d be left with nothing.”
Then there was the fear that covetous neighbors were eager to annex more valuable oceanfront property. “Ocean Ridge would have gotten rid of the trailers and we were here before Ocean Ridge. What the heck? They thought we were trailer trash and we were much more than that,” David said. 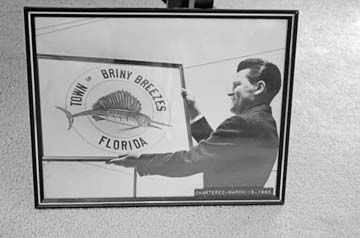 David, a well-connected real estate agent, quickly discovered that local legislators were unlikely to sponsor a bill creating a 38th municipality in the county. But David found a loophole in old Florida statutes, gathered 151 “freeholders” together in the old oceanfront clubhouse March 19, 1963, and voted the 43-acre mobile-home park into existence as a town, the county’s second smallest municipality.
Former Mayor Carol Conkey spelled it out in A Simplified Guide to Our Town, a pamphlet available in the town’s library.  The town was founded:
“— to avoid interference from and annexation by other local governments.
“— to provide municipal services modified to meet Briny’s unique needs (these services, as provided by Palm Beach County, were slow, cumbersome and inadequate).
“— for the financial rewards extended to municipal governments by such means as revenue sharing and control of local taxation.”
Hugh David was elected mayor at that first meeting and kept the position, unchallenged, for 34 years until his death in 1997. Alderman Pete Fingerhut, a longtime resident, dubbed him “our George Washington.”
“He was totally instrumental in our becoming a town; and because he was president so long, there was consistency between the town and corporation,” said Nicholls, Briny’s unofficial historian who collected the aging photographs shown at the picnic.
Hugh David was a fierce advocate for Briny and its unique intertwining of town, corporation and trailer park. As corporation head, he got a sewage treatment system installed — unusual for beachfront communities. He supervised the construction of the swimming pool.
As mayor, he secured a federal grant to connect Briny to the regional sewage treatment plant. He negotiated for the first traffic light in town.
David persuaded Rinker Materials to dump discarded concrete on a wooden jetty and help create a groin that is still credited with preserving the town’s 600 feet of beachfront.
His oft-repeated mantra was, “There’s no place like Briny,” a phase he adopted from 12-year Alderman Paul Folsom.
Folsom was the state’s oldest elected official when he died in 1991 at the age of 99. A few months earlier he told The Palm Beach Post, “I expect to run again if my friends and the cremators don’t get me first.”
In the early years, the town marshal, required by state law, was a handyman who patrolled at night in his truck. “But he was on call 24 hours a day,” said Rita Taylor, who was the town’s volunteer clerk for 34 years and an alderwoman for 36 years. The Fire Department was five volunteers from the corporation’s maintenance staff.
When the marshal moved away early one summer, Briny had no way to replace him until November when elected officials returned. Taylor recruited temporary help from Ocean Ridge, where she was the paid town clerk, eventually leading to a contract with the town for police protection.
At first the town had no town hall and no money to build or rent one. The council met in a room in the park’s oceanside clubhouse.
“We often met in the card room. When it was time for card players to have their game, we had to stop our meetings,” Taylor said.
Taylor kept the town records in her mobile home. “When the meetings were over, I’d just take the records home. You have to keep records for so long, by state law, so after a few years, I ran out of space,” she said with a laugh.
For a while, the town used file cabinets in the corporation office, but Taylor ended that after employees confused the records. The corporation offered to remodel an abandoned restaurant on the beach for a town hall, but the building was too dilapidated to be repaired.
Eventually, Taylor and her records moved into a storefront next to the beauty shop, where Gustus Food Store and an awning shop had been. 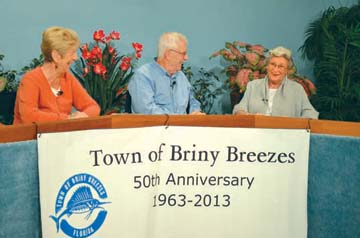 Aside from Hugh David, Taylor is widely credited with keeping the town in step for decades. If David was the chairman, Taylor was the CEO. She was clerk in Ocean Ridge for more than 18 years and has been Gulf Stream’s clerk for 23.
“It was five guys and Rita,” said Mayor Bennett. “It was ‘Rita, can we do this?’ She had all the (government) connections. She ran the town for 30 years.”
The town hall today — or more accurately, the town office and council room — remains in the same storefront.
Meeting notices are taped to the window, there is no audio system and the phone sometimes rings during meetings. Official hours are 10 a.m. to noon Tuesdays and Thursdays.  The town is just now computerizing its records.
No one minds. “It’s a little bit of Old Florida that’s still here,” said Dorothy McNiece, 85, who recently published Looking Back in Time, a memoir that focuses mostly on her life in Briny and her parents, Glen and Ellene Mann, one of the park’s founding families.
The town didn’t levy taxes until it became a requirement in order to receive state revenue sharing. Now the town charges the maximum state law allows, and that has to be supplemented by the corporation’s contribution to police, fire and sewage treatment costs.
Except for the turbulent 2005-’07 period when residents clashed over the Ocean Land sale that collapsed, the town seldom holds elections. It’s more a matter of recruiting aldermen than voting for them.
Said Marilyn David: “I’m three minutes from Delray Beach, a few miles from West Palm Beach. I have a large two-bedroom home on the Intracoastal Waterway. I’m a block from the ocean. You can’t beat that.”