Brenda Dooley presents Dana Littlefield with two quilts, one for himself and another for his brother Nelson Littlefield. Photos by Jerry Lower/The Coastal Star

What do you say to a military veteran after you’ve said, “Thank you for your service”?
In March, the Briny Breezes Hobby Club said it with needles and thread, yards of colorful fabric and countless volunteer hours.
On that breezy Tuesday morning, nearly a hundred neighbors and friends gathered by the town’s fountain to see 45 handmade quilts presented to men and women who had been members of the U.S. Armed Forces long before they were residents of Briny Breezes.
As flags of the U.S. Army, Air Force, Navy, Marines and Coast Guard fluttered high above the fountain, club President Marla Guzzardo called out their names.
“Larry Adams … Michael Amaturo … Terrence Brabham … Phillip Brackett.”
Elisabeth Galea, co-chair of the project, met each veteran with a handshake and a quilt — 40-by-60 inches, with red, blue and patriotic panels on a white background.
“Gail Elble … Tom Goudreau … Carol Guth … Bruce Jensen.”
The Briny Breezes Hobby Club had been sewing these quilts for strangers long before they made them for their neighbors.
Quilts Of Valor, they’re called. The Briny Breezes Hobby Club honored 45 veterans, many of them seen here saying the Pledge of Allegiance.

A dream realized
In 2003, a woman named Catherine Roberts of Seaford, Delaware, whose son Nat was deployed to Iraq, had a dream. Not a metaphor, a real dream.
“I saw a young man sitting on the side of his bed in the middle of the night, hunched over,” she recalled. “The permeating feeling was one of utter despair. I could see his war demons clustered around, dragging him down into an emotional gutter.
“Then, as if viewing a movie, I saw him in the next scene wrapped in a quilt. His whole demeanor changed from one of despair to one of hope and well-being. The quilt had made this dramatic change. The message of my dream was: Quilts equal healing.”
And the Quilts of Valor Project was born. Nearly two decades later, the national group has sewn about 300,000 patriotic quilts and presented them to American veterans.
In the past, the Briny Breezes quilters had sent their quilts to that national organization.
“But we never saw the people who got them,” Guzzardo said.
And so, last October the club placed a notice in the Briny Bugle seeking veterans for whom they wanted “to do something special.”
They compiled a list, set to work, and on this Tuesday morning in March, that something special happened. 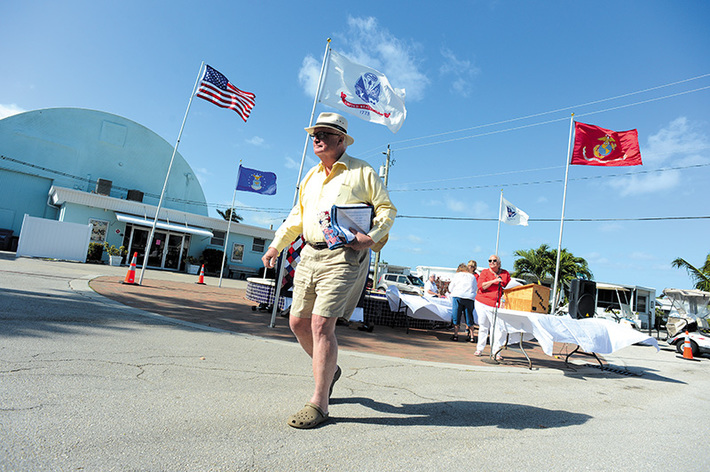 Under the fluttering flags of the United States and its service branches, Army veteran Paul Sullivan returns to the crowd after receiving his quilt.

Serving those who served
“I love this,” said Army Spc. 4th Class Stanley Brunell, who served as a radio telegraph operator in Germany, from 1965 to 1967. “This is awesome.It’ll be a permanent memory.”
Standing beside him as he held his new quilt was his wife, Carole. After marrying in February 1966, she joined him in Germany four months later. And 56 years later, she admired him as he admired his quilt.
Gail Elble graduated high school in 1968, but didn’t join the U.S. Naval Reserve until 1982.
“I was working as a school guidance counselor when I heard about the Direct Commission Officer program, which lets civilians receive a commission if you have special skill and pass the test. My principal flunked the test and I passed.”
She entered as an ensign, served 20 years and retired in 2002 as a lieutenant commander.
Army Spc. 5th Class Paul Sullivan was surprised.
“It was a total surprise,” he said. “The Briny hobby club is the largest with 200-plus members, and I knew nothing about this project. I don’t know how they got my name.”
But he was glad they did. 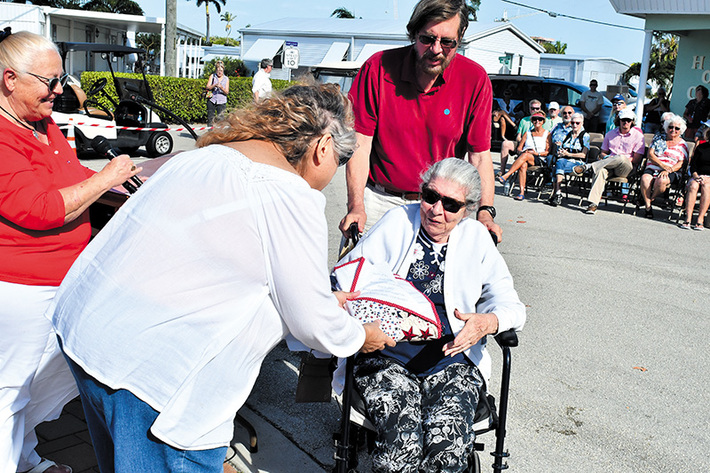 Elisabeth Galea presents a quilt to June Fingerhut in honor of her late husband, Pete. Her son-in-law, Tom Oglesby (in red), also was honored.

Eric Wolffbrandt served on the U.S. Air Force’s Air Defense Command staff in Syracuse, New York, from 1967 to 1969. He had a top-secret clearance, but never saw Vietnam.
“I appreciate this,” he said, holding his quilt but thinking more of others than himself. “I remember during the war our commanding officer told us, ‘Don’t wear your uniform off base because of all the protesters in the street.’ So I appreciate this remembrance, honoring all these men. I have awesome respect for all those who were actually in combat.
“I’ll put this on a wall somewhere,” he said. “It’s beautifully done.”
They chatted, they posed for smartphone photos with their quilts, and they dispersed. Honored for service decades ago, they returned to their lives today. And the Briny Breezes Hobby Club will return to its regular hobbies. The something special the members had arranged for the town’s veterans was also something unique.
“This is a one-time event,” Guzzardo said, “but we’ll continue to do this individually as more veterans move to Briny Breezes.”