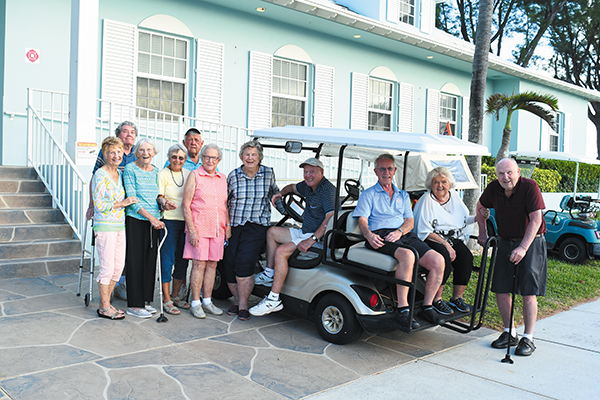 After 63 years of marriage, Chuck and Betty Foland pretty much know everything there is to know about each other.
Except maybe for one thing.
“I still don’t know where he got the money from,” Betty says.
That would be the $2,500 Chuck gave to retiring strawberry farmer Ward Miller in 1958 to buy a prime lot in what is now Briny Breezes.
It seemed a bit of a risky extravagance at the time. In today’s dollars, that was close to $22,000, after all. Back then, the Folands had year-and-a-half-old twin daughters in their 28-foot Airstream camper and the expenses of a young family waiting back home in Syracuse, N.Y. But Chuck didn’t waver. In fact, he decided to buy a second lot for $2,000.
“I realize now it was a pretty smart move to make,” Betty says with a smile. “But at the time I thought he was crazy.”
It turned out to be the investment of a lifetime — and an important part of Briny Breezes’ beginning as an independent community. The Folands and their children and their children’s children and their children’s children’s children have been regular winter visitors to Briny ever since.
The shareholders of the cooperative that owns Briny Breezes plan to celebrate its 60th anniversary on March 24 with a golf cart parade led by the Folands and other Briny pioneers, the early investors who took a chance and helped shape the improbable history of the seaside mobile home park.
What did the pioneers have in common? Most were from the Midwest and middle-class families, most liked each other and all of them just liked being in Briny.
Curt and Beverly Mosher, from Damascus, Ohio, spent their honeymoon here 67 years ago and have been returning ever since. Her father was an original stockholder.
“Maybe people pay $8 million for a house down the road here,” Beverly says with a laugh. “But they aren’t having the fun we’re having in our clubhouse.”
Violet Schoeni’s first visit was in 1925, when she was only a year old and strawberries really were growing on the land. Sisters Betty Lewis and Judy Munson came with their parents in the 1950s from Courtland, N.Y., just south of Syracuse. Dan Harkness came with his family from Elkhorn, Wis., in 1953, and joined the first group of investors.
Don Gross started coming down from Chicago in 1949 and then bought a lot nine years later. He put the property in his mother’s name and lives in Briny full-time now. His children and grandchildren have followed.
Dorothy McNeice, one of the town’s historians, arrived in Briny from Port Huron, Mich., during the fall of 1938 in an 18-foot travel trailer. She was 11 years old. Ward Miller charged her family $7 a week to rent a space. Her father ran a grocery store for the community. Then World War II came to Briny’s doorstep.
“It was very hectic here during the war years,” she recalls. “The German submarines were sinking our ships. We’d get up in the morning to go to school and see ships burning just off the coast.”
Civil defense wardens came around to make sure the campers maintained a blackout at night. Many families chose to stay up North until after the war.
David Bayless, Beverly Mosher’s brother, was playing football at Muskingum College in Ohio in 1958 when his father, Paul, bought a lot from his friend Miller. When Fidel Castro overthrew Fulgencio Batista in 1959, Cuban refugees made their way to Briny. The Bayless family and other Brinyites took the Cubans in and helped them resettle.
In the late 1950s, amenities were minimal in the young community.
There was one telephone, in the office, and residents were summoned by loudspeaker to come take their calls. The main water hookups were little more than garden hoses. Toilets and showers were in bathhouses. Those who had TVs used rabbit-ear antennas to capture black-and-white images. Electric service could be unreliable. And there was no air conditioning.
But the Briny pioneers kept things informal and trusted each other. The trailer doors weren’t locked at night.
“There was supposed to be a town marshal. But I never saw him,” Chuck Foland says.
Business transactions moved quickly from hand to hand.
“Briny was always a cash place,” Bayless recalls. “We called it cigar boxes. The park would keep a box of cash and put it on the table when the time came to pay its bills. That was the culture here.”
Beverly Mosher remembers how happy hour traveled door-to-door: “They used to carry Manhattans in a big jug on their backs and shoulders and go from one house to another having drinks.”
To Betty Foland, the absence of a feeling of status or class makes Briny extraordinary.
“I like that we have every standard of life here — every income,” she says. “There are very wealthy people here and you’d never know they’re wealthy. There’s also low-income people. That’s a community to me.”
There’s also a quiet miracle that has evolved over the 60 years that makes Briny rather extraordinary. Despite its vulnerable location pressed tightly between the Atlantic and Intracoastal, Briny has avoided significant damage from the dozens of tropical storms and hurricanes that have passed by.
Hurricanes Wilma and Irma did blow off some shutters. And a tornado turned over a couple of trailers in the early ’60s. But Briny abides.
“I know why,” says Beverly Mosher. “It’s because so many people here are praying for us.”