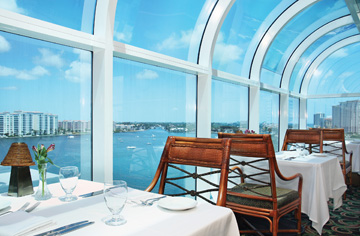 to include a selection of small plates and a prix fixe menu. Un Next: A new wine list. Photo by Tim Stepien

For a listing of 13 waterfront restaurants including those at The Bridge Hotel, click here.

Boasting views of the Boca Inlet, Lake Boca Raton and the Atlantic Ocean, the Bridge Hotel is undergoing over $2 million in renovations.

“These changes are ongoing,” says Fran Bannon, who is director of sales and catering. “We’re attacking things as necessary but focusing on the creature comforts.”

Water Colors, the hotel’s casual eatery, was gutted about a year ago and underwent a three-week transformation.

The menu, reworked by executive chef Dudley Rich and his all-new culinary team, is heavy on fresh seafood, salads and burgers.

Upstairs in Carmen’s at the Top, they’ve reconditioned the wicker furniture and upgraded the dance floor in the main dining room. And they’ve added new furniture and drapes to the private Starlight Room.

The menu laden with what Rich calls “country club fare” now also has a selection of small plates and a prix fixe menu. A new wine list featuring “wines of passion” will be available soon.

Other changes to the hotel include a totally redone lobby with chilly white accents, new carpet and paint in public corridors and a new air-conditioning system.

Rooms have seen new beds, bedding, drapes and curtains, the addition of 38-inch flat-screen televisions and humidifiers as well as refinished walls. The hotel now also offers a do-it-yourself laundry.

Coming soon, the hotel has plans for a boat dock that will wrap around the entire building and a retrofit and upgrade to the fitness center.

“There may be only one or two other hotels in the country that have the potential like this property to become a four-star boutique hotel,” says general  manager Greg Kaylor.             Ú

Tags: boca raton, carmen's at the top of the bridge, renovations
E-mail me when people leave their comments –
Follow