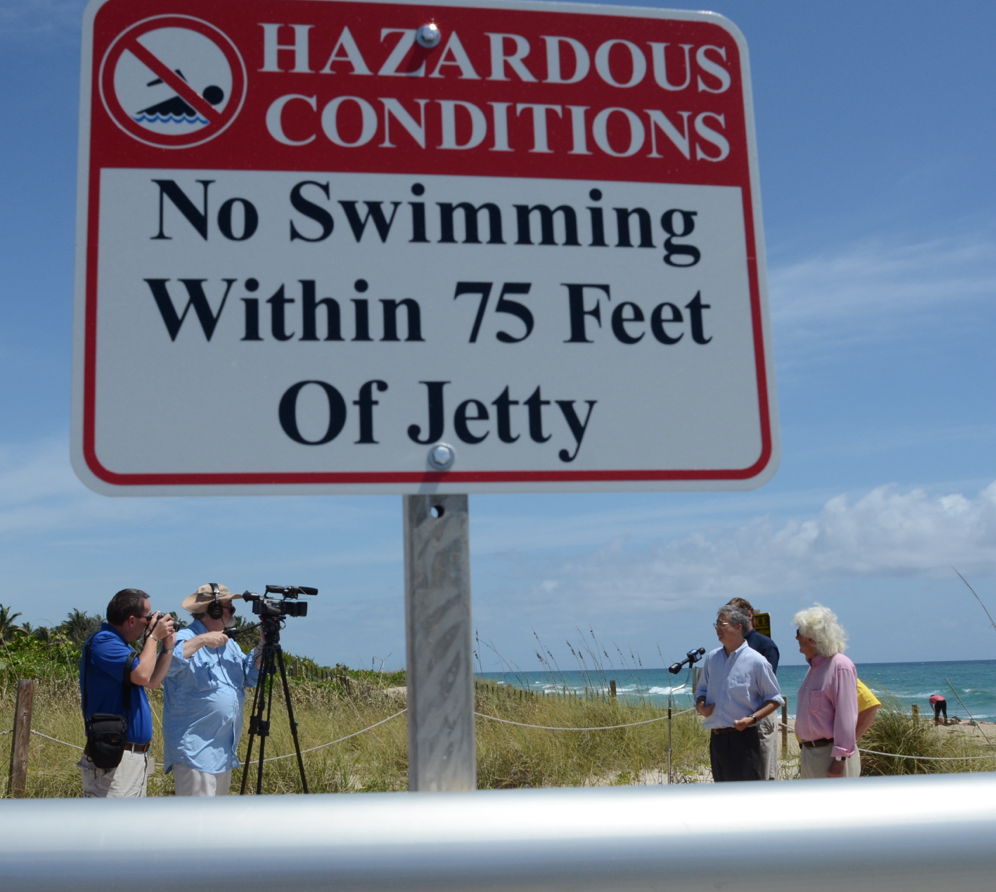 By Jane Smith and Dan Moffett

Palm Beach County closed the beach access on the north side of the Boynton Inlet in late April because of a rash of nearby drownings and rescues since January, according to the county parks and recreation director.
By the last Friday in April, the new signs were in place and the gate, near the shower pole, was welded shut. One sign read: “BEACH ACCESS CLOSED-Use South Side Of Inlet.” The other two signs warned beachgoers about the hazards of the inlet and the sand transfer plant. 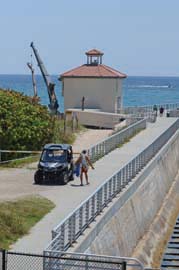 April 27, A  Manalapan Police officer warns a man that he is not allowed on the beach north of the pumping station. Jerry Lower/ The Coastal Star

Over the weekend, Manalapan police officers were stationed on the north side of the inlet, directing beachgoers to the south side. When questioned by fishermen about the reason they couldn’t fish from the beach, the police officers said a county ordinance restricts people from getting within 75 feet of the sand transfer plant — a confusing point considering a fishing pier sits adjacent to the plant.
County Commissioner Steven Abrams, whose district includes the South County coastal areas, was set to give a press conference April 30 at the inlet with the mayors of Manalapan, Boynton Beach and Ocean Ridge. He wanted to call attention to the hazardous conditions on the north side of the inlet, where going in the water within 75 feet of the sand transfer plant is prohibited by a little-known county ordinance.
Linda Stumpf, Manalapan town manager, said she and the Manalapan mayor met with Abrams in mid-April to express their concerns about the dangerous conditions on the north side of the inlet. “I brought up our concerns about the rip currents and the drownings to Abrams. He agreed with us that closing the access was a step in the right direction. There have been far too many drownings and near drownings.”
The beach access closing lasted for four days.
Late on April 28, Abrams’ staff sent out this text message: “The county inadvertently restricted access to the beach area. The gate is being removed in the a.m. and access will be restored. It was a premature move that is being corrected. They [county Parks and Recreation Department] received numerous complaints. Also advised the Manalapan police of this so that they will not restrict access to the beach. The focus is diverting the swimmers not the beachgoers.”
The following day, Stumpf was perplexed: “We don’t know exactly what they’re going to do next but I do know the gate has been opened. My understanding is that they are going to try to prohibit swimming there.
“Apparently there’s been some pushback, and DERM [Department of Environmental Resources Management, which operates the sand transfer plant] said we have to allow access. [Congresswoman Lois] Frankel’s office called and said she’d gotten a number of complaints.
“We received calls from both sides. Some people were very happy that there wouldn’t be any more drownings there. Others were upset that the beach was closed. Nobody who called that was unhappy was from the area. They were from west Lantana, or out of town and didn’t live here.”

A series of area incidents
The three young men who drowned since the start of the year were either wading or swimming in unguarded areas. Two drowned near the Boynton Inlet, which is hazardous even on a calm day, said Phil Wotton, south district captain for Palm Beach County Ocean Rescue.
“What makes the Boynton Inlet so dangerous is all the activity that takes place there,” Wotton said. “You have an inlet, with that comes strong tidal currents. When people swim too close to the inlet on an incoming tide, the current pulls them towards the inlet. If you are swimming on the north side that takes you towards the jetty. On the south side it does the same, but it will suck you into the inlet.
“During guarded hours our staff will blow their whistles to keep people away or rescue, if needed. On the north side we cannot see them until the fishermen get our attention.”
Boats zipping in and out of the inlet, snorkelers looking at the reef below and surfers trying to catch a wave add more activity, creating a hazardous area, Wotton said. The sand transfer plant with its sudden drop-off adds another hazard.
Plus, the north side of the inlet sits in Manalapan, which does not have lifeguards.
The north side also has a large sign prohibiting swimming, diving or wading near the sand transfer plant.
Even so, Sebastian Francois, a 15-year-old visiting from Haiti, was wading on the north side on Jan. 14 when he went under. Two days later, recreational divers recovered his body in the ocean.
Francois might not have known the sand transfer plant there has a sudden drop-off, said Ocean Ridge Police Chief Chris Yannuzzi, who first offered condolences to the families of the drowning victims.
That death was followed by the drowning of Billy Jeudi, 23, who went for an early morning swim on Feb. 13 on the south side of the inlet and was caught in a rip current that pulled him into the inlet. His body was found the next day in the Lake Worth Lagoon.
Two male teenagers were stranded on March 1 when they were surfing on the north side of the inlet. A strong current pushed Nick Quigley and Jonah Zucker into the jetty and they managed to hold on to a pillar for 20 minutes until they were rescued.
On March 26, an unidentified 19-year-old nearly drowned after he was caught in currents while swimming near Ocean Inlet Park, south of the inlet. He was able to swim back to shore on his own, although the Palm Beach County Sheriff’s Office Marine Unit and Coast Guard had dispatched boats.
Less than a week later, 20-year-old Jacobo Dorcely drowned off Ocean Ridge Hammock Park, about 1 mile south of the inlet and another unguarded beach with two warning signs about the lack of lifeguards. He was swimming with two other men when he went under and didn’t resurface. The rescue call went out about 5:30 p.m. on April 2, and his body was found about an hour later.
“We encourage them to swim by a lifeguard, [but] there has to be some personal responsibility also involved,” said Eric Call, director of the county’s Parks and Recreation Department. “The county can’t [afford to] have guards working till dark and on beaches that are infrequently used.”
On Good Friday, April 18, a day without school, two Park Vista High School seniors visiting the south inlet beach were called to rescue two younger boys who were stranded in the inlet. The seniors, Collin Barch and T.J. Preble, both 18, jumped in the water, according to news reports. The two younger boys then climbed onto Barch’s back, and as Preble swam closer, one climbed onto his back. Barch and the kid on his back made it to the shore safely. But the boy on Preble’s back kept pushing him under and the water soon separated the two.
That boy was estimated to be about 10 years old by Wotton of county ocean rescue. “Our rescue boat responded and rescued a minor who was holding on to a surf board against the jetty,” he said.
The boy was transported to Bethesda East Hospital with minor injuries. Wotton’s staff was alerted about 4:30 p.m. of the situation by county fire rescue dispatch and a beach patron who came to the lifeguard tower on the south side of the inlet.
Preble was rescued by some people who threw a rope down to him from the end of the fishing pier.  He was taken to JFK Medical Center and remained overnight because of a fever.

An increase in visitors
During the first quarter of the year, visitors to South County beach parks have increased four- or fivefold, said Lt. Allan MacQueen with county Ocean Rescue. Just over 150,000 people have visited Ocean Inlet park this year, which started on Oct. 1. The attendance figure ranks the park fifth out of 13 for county beach parks.
Last year, it also ranked fifth with attendance at 332,539. County beach parks are popular, MacQueen said, because they mostly have free parking.
Swimmers unfamiliar with the strength of the ocean currents or those who simply don’t care to find out are also problems, MacQueen said. He mentioned a May 2013 incident when lifeguards warned a group of teens against entering the rough water in Gulfstream Park. The teens walked a half-mile south to an unguarded area to go into the ocean, where one drowned that day. His body still has not been found.
If MacQueen were in charge, he said he would have a big stack of foam noodles for inexperienced swimmers to use. “That way, you have something to hold on to when you’re out there and get in trouble,” he said. “You can kick to stay afloat until you are rescued.”