A moving glass wall may enclose the Little House’s porch. 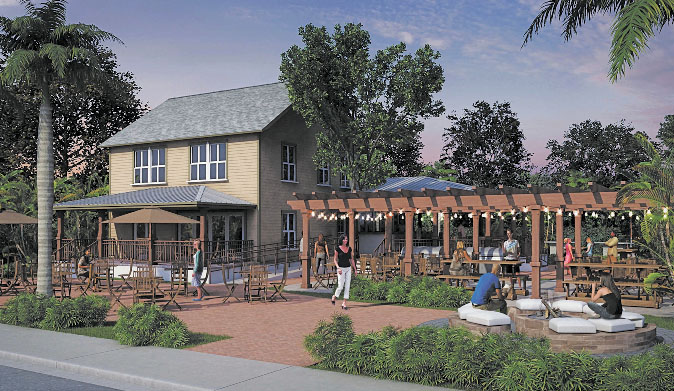 Craft beers and tapas are coming to two new restaurants on Ocean Avenue.
The owners received approval in April from the Boynton Beach Community Redevelopment Agency board for their casual concepts and site plans.
The owners used the same architect, Jim Williams of Boca Raton. He raved about the potential of both venues.
Of the Little House at 480 E. Ocean Ave., Williams said, “I’m happy to be part of this project and helping to establish the fabric of the neighborhood.”
The owners, a partnership formed by Ocean Ridge Vice Mayor Richard Lucibella and Barbara Ceuleers, looked at what could be done, Williams said.
They decided to enclose the porch with a moving glass wall.
With 24 seats outside and 47 seats inside, the operator said she could make a go of it, Williams told the CRA board members.
Lisa Mercado, who owns the Living Room restaurant on Congress Avenue, will rent the restaurant from the Lucibella partnership. She was mulling two names at press time.
Renovations at the cottage-turned-restaurant also will include a hood for a stove and an open fireplace that sits on the eastern wall so that it is half outside, half inside. In addition, the eatery will have sidewalk seating. The porch addition will add 525 square feet to the restaurant.
Lucibella said he hopes to open in the fall so that they can take advantage of seasonal visitors.
For the Oscar Magnuson House at 211 E. Ocean Ave., Williams was effusive.
“When (restaurant broker) Tom Prakas called us at the end of last year and asked us if we could help illustrate his concept, everyone in my office got excited,” Williams said. “They can’t wait for it to open and hang out.”
The historic house will receive a 2,000-square-foot addition that includes a full kitchen and restrooms, a bar that starts inside and continues outdoors, a bocce court in the rear, fire pits in the front and back, and a beer garden under a trellis on the east side. For landscaping ideas, Prakas suggested visiting Guanabanas in Jupiter to see its lush tropical plantings.
That restaurant also will have a small plate focus and be a place to get “a meal in a comfortable, neighborhood environment,” Williams said.
Because more work will be involved, he said it will take longer to finish and likely be ready in the fall of 2017.
The CRA owned both properties and used Prakas to market them. Vivian Brooks, the CRA’s executive director, has high hopes for the two restaurants and the 500 Ocean apartment complex.
“They are the game changers for Boynton Beach,” she said.