Renovations at Sunshine Square are more than halfway complete, with several new tenants, including a Panera Bread and TD Bank, anticipated for the shopping center at the southwest corner of Woolbright Road and Federal Highway.
The enlarged Publix is expected to open in September with 14,000 more square feet than the old building and a more accessible design, according to spokesperson at Edens, the Columbia, S.C.-based, owners of the center.
Coastal residents have watched this season as the 148,665-square-foot Sunshine Square underwent its transformation, which included creating a new entry off Woolbright to give the center a main drive and better access to Publix.
The center’s growing pains seem to have affected some merchants and shoppers worse than others, depending upon which part of Sunshine Square they were trying to access. Some seasonal shoppers have been deterred, perhaps by a severe lack of parking and fear of flat tires during construction, merchants have said.
The new retail building, which will house Panera Bread, is well under construction, but Edens has not named any other tenants who will occupy it. Following its completion, the “main street” and parking will be reconfigured, and lastly the outparcels will be built.
In addition to improving access for both drivers and pedestrians, the developers are giving shoppers more reason to sit on benches and relax a while. The center will feature an art installation by artist Mark Fuller, whose work dots outdoor locations throughout South Florida, including a few works at Boynton Town Center.
In September, Publix closed, and the old smaller building was demolished. The new store will be nearly 55,000 square feet.
Meanwhile, the center has welcomed a couple new tenants, including an AT&T store and a DIY Yogurt. TD Bank is expected to fill an outparcel facing Woolbright Road. 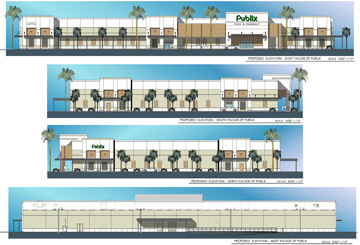 A rebuilt and enlarged Publix supermarket will anchor the renovated mall at Federal Highway and Woolbright Road in Boynton Beach. Rendering provided