Live, Work, Play: Third of a three-part series looking at the downtowns of  Delray Beach, Boca Raton and Boynton Beach 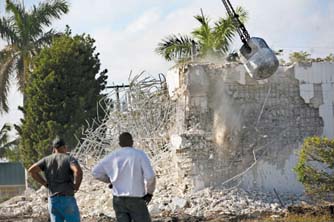 A wrecking ball demolishes what remains of the Bank of America
building on Federal Highway at Ocean Avenue in Boynton Beach
in January. Tim Stepien/The Coastal Star

Developers are busy in the downtowns of Delray Beach and Boca Raton.

New residential projects are getting city approvals. The vision for downtowns where young professionals live, work and play is within reach.

But major developers are reluctant to invest in Boynton Beach ’s downtown.

“A lot of developers are scared away from Boynton Beach because of that city’s lack of unity,” said Bill Morris, a developer in the other two cities.

Boynton Beach has been a city in turmoil. The mayor got arrested and city commissioners resigned. Property values fell sharply in the recession, and crime is perceived as a problem.

But interim Mayor Woodrow Hay says recent events show Boynton Beach is getting its act together.

The City Commission filled two vacancies and gave a permanent job to Lori LaVerriere, who had been interim city manager for 18 months, on Dec. 18.

“We now have a full City Commission and a full-time city manager,” Hay said. “So the stability is here. That problem has been resolved.

“Now we’re working our tails off to get people to take a second look at Boynton,” he said.

City officials joined the Chamber of Commerce and the Community Redevelopment Agency on a Jan. 17 bus tour to show commercial real estate agents their downtown vision.

“They saw three agencies working together,” Chamber Chairman Jonathon Porges said. “The word is out that Boynton is open for business. The train is pulling away from the station and we are all on board.”

Boynton, like Boca Raton, doesn’t have a historical downtown similar to Atlantic Avenue in Delray Beach.

“We’re starting from scratch,” CRA director Vivian Brooks said. “Ocean Avenue goes right to the beach, so we’re trying to capitalize on that.”

So far, Boynton’s downtown has two pieces in place.

The city has spent $6 million to make Boynton Harbor Marina a destination. Boynton is the only downtown that has charter boats for deep-sea fishing. Two Georges and Banana Boat are popular nightspots.

Young professionals rent apartments that overlook the marina. Although most commute to jobs outside the city, at least they enjoy a place to live and play.

The other existing piece is the towering Promenade condo project that opened on Federal Highway north of Ocean Avenue when the housing market was collapsing four years ago. The condos didn’t sell and the project went into foreclosure.

The Related Group took control of the Promenade last December, when only 72 of the 395 condos in the 14-floor twin towers had been sold. A company spokesman says Boynton is “the only frontier left for growth near the water.”

Now some city leaders are focusing on two more key pieces — an old high school and a proposed train station — to bring people into the downtown and stimulate new residential development.

The abandoned high school would become Ocean Avenue’s western anchor to create a downtown that extends west of Federal Highway.

The vision is for the rebuilt school as a destination similar to Old School Square in Delray Beach with restaurants, retail and a banquet hall. The city has signed a contract with an architect who is trying to get financing for the project.

LaVerriere describes the commuter train station proposed between Ocean Avenue and Boynton Beach Boulevard on Fourth Street as a “transforming moment” for the downtown, if it is built.

Another key property if Boynton’s downtown is to come alive is the site of the former Bank of America building on the northeast corner of Ocean Avenue and Federal Highway. A major project there would be a centerpiece for redevelopment much like the proposed Atlantic Crossing in Delray Beach and Archstone in Boca Raton, developers and supporters say.

Boynton just needs to persuade developers to take a chance.

“I understand that some developers have shied away because of the political climate,” said Nancy Byrne, the city development services director. “But if they can weather the political winds, their projects will go through smoothly.”

Boynton Beach might need to get past its March 12 city election before developers believe Boynton leaders are unified in their downtown vision.

Holzman says Taylor, a former mayor with 10 years on the commission, contributed to downtown problems.

“We have very big problems to overcome because people like my opponent had no vision,” Holzman said. “Boynton has allowed other cities to leapfrog over us because of missed opportunities, terrible decisions and no planning.”

Taylor disputes that: “He’s wrong when he says I held them back. He doesn’t realize that I put together the master plan.”

The owner of the former Bank of America site has told Brooks that he doesn’t want to develop his property. “But I’m working with him,” Taylor said. “He’s supporting me big-time in my campaign.”

Holzman has led the push to make the old high school a downtown attraction.

“The success of that project is so vital to create life in an area that has none. We should do everything in our power to make it a rousing success,” he said.

But Taylor wants a City Hall on the site. “I will build a new City Hall with the façade of the old high school, if that’s what everyone wants,” Taylor joked before commissioners split 3-2 on whether to go ahead with the high school project on Feb. 5.  Taylor sees the train station as a stimulus, but Holzman says the proposal for Florida East Coast commuter trains is uncertain.

“They’ve been talking about that for 10 years,” he said. “We can’t plan around and pray for something that may or may not happen.”

So disagreement continues and developers shy away at least until after the election.

“Political stability is important for investors. If you want to build a $100 million building, you want to know everything is going to be stable from beginning to end,” Brooks said.

Boynton leaders look south to Delray Beach to see what they can only wish that their downtown could be.

“Delray has been able to achieve continuity of vision,” Brooks said. “We haven’t had that here.”

Holzman said developers will only invest if they know what the city envisions will be built around their projects.

“I would love to see our downtown as a place to live, work and play — but we have to be realistic,” Holzman said. “Maybe we could be a smaller version of Delray.”