Boynton Beach held a soft opening of its new Fire Station 1 on June 3. As part of the city’s Public Art program, a mural featuring a collage of photos of the city’s fire rescue staff had been installed in the station’s lobby windows the day before, facing Northeast First Avenue.
Elected leaders, development partners and the media joined the walk-through of the new station, as mural artist Lynn Doyal enthused about her first public art project.
The next day, the mural was removed.
The reason? The mural was altered from what had initially been approved by the city’s Arts Commission. The faces of two Black ex-fire-rescue leaders had been whitewashed and made indistinguishable. Photos of the altered mural were posted on Twitter and Facebook starting on the afternoon of June 3.
The altered mural created an uproar in the community at the same time as widespread unrest over race and policing followed the May 25 death of George Floyd, a Black man who died while in the custody of Minneapolis police.
In Boynton Beach, Black people make up nearly 32% of the population, according to the July 2019 U.S. Census estimates.
Retired Deputy Chief Latosha Clemons, whose mural images were altered, grew up in and still lives in Boynton Beach. She and local Black church leaders say her legacy as the city’s first Black woman firefighter was erased.
“I sincerely apologize this occurred and will take every measure necessary to ensure this never happens again,” wrote Lori LaVerriere, city manager, in a public apology issued late June 4. “Please understand that this unfortunate incident is not indicative of our values.”
At the Arts Commission’s June 11 meeting, members agreed to reinstall the mural they approved in November, restoring Clemons’ image.
But the controversy led LaVerriere to fire Debby Coles-Dobay, the Public Art director, and seek the resignation of Fire Chief Matthew Petty on June 6. Both former staffers are white.
Still, the Black community was outraged.
Rae Whitely, spokesman for the Boynton Coalition of Clergy, said someone sent him photos of the doctored mural on the morning of June 4.
“I was upset because I know Latosha personally, knew her passion for the job and firefighting,” Whitely said. “Throughout history there were examples of Black history being erased. Here, it was happening in our backyard.”
Whitely immediately called Woodrow Hay, a Black city commissioner for District 2, where the new fire station sits. Hay promised to do something, according to Whitely.
As the clergy spokesman, Whitely sent the city a massive public records request on June 8.
“It doesn’t make sense,” Whitely said. “A lot of people are wondering: What is the full story? We are not jumping to conclusions. We want to know what happened.”
For Clemons, her emotions ranged from shock when she first saw photos of the altered mural to hurt to disrespect to outrage.
“I was on the committee that created the artwork,” she said at a June 17 news conference held outside her West Palm Beach attorney’s office.
She explained how she came to be a Boynton Beach firefighter. Back in 1995, she met with the city’s first Black fire chief, Floyd Jordan. He stood 6 feet 7 inches, and Clemons’ height is barely over 5 feet.
“‘Chief, think I have what it takes to do the job?’ He rose from his chair. He takes hold of my shoulder and says, ‘Latosha, you can do this,’” she said.
When Clemons saw photos of the altered mural, she felt bad for herself and the Black girls in Boynton Beach.
“I had a sense of pride as the first and only Black female in the department. It was bigger than me. It was for the whole community to be able to walk by the mural,” she said. “The hopes and dreams are shattered of the young girls.”
She wants to know why it happened and who made the changes. She also wants to see a thorough investigation. Clemons and her attorney, Nicole Hunt Jackson, filed a public records request with Boynton Beach to find the answers.
“We’re reviewing all of our options,” Hunt Jackson said, when asked if Clemons was planning to sue.
Clemons did not apply to be the chief after Glenn Joseph left that position in late November. As the city’s second Black fire chief, his face also was whitewashed. He did not respond to numerous phone messages seeking comment.
Little information has been revealed about why the mural was modified, and many questions remain. 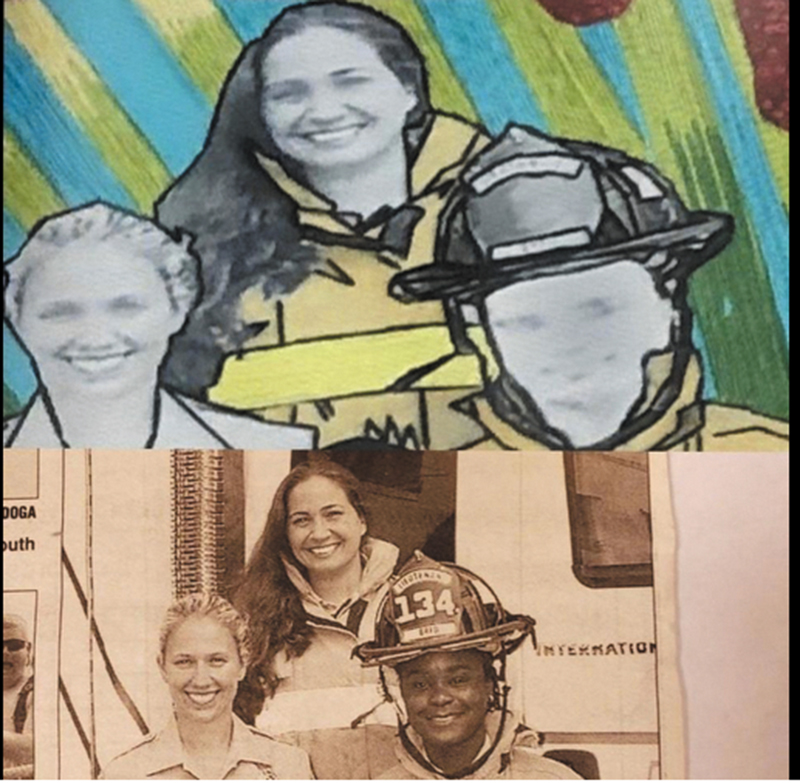 The top half of the image shows the altered portion of the mural and the bottom shows the photo used by the artist.
Photo provided

At its November meeting, the city Arts Commission members approved a mural called Community Heartbeat. The mural is a collage of firefighters in action and at city events with a red heartbeat line running through. Doyal was paid $7,500 for her work.
Commission member Clovis Moodie, who is Jamaican American, wanted to ensure the photos represented the city’s culture and diversity.
The members did not see the altered mural that was installed.
Coles-Dobay, the fired Public Art manager, wrote in a June 4 email to the city manager that the mural was modified in April at the direction of Petty and Fire Marshal Kathy Cline.
Cline was also a participant in the April 20-23 emails with Petty and Coles-Dobay about the mural changes, but Cline’s role was not described.
Cline referred questions to the new Assistant City Manager Kathy Matos. Matos sent the questions to the city spokeswoman, who declined to explain Cline’s role in the altered mural.
On June 19, Coles-Dobay told The Coastal Star that senior fire rescue staff assured her the city manager would approve the changes.
Petty did not return cellphone messages.
Matos said she heard that retired Fire Chief Joseph did not want to be in the restored mural. Nicole Banks, the assistant Public Art manager, will contact the current and former firefighters who appear in the mural, in case they change their minds about wanting to be in it.
The results will be given to the Arts Commission members at their July 9 meeting.
At the City Commission meeting on June 16, LaVerriere announced that Ray Carter, retired fire chief, has agreed to lead the Fire Department for the rest of the year.
“That will allow us to do a nationwide search,” she said.
The commission had received numerous emails in support of Coles-Dobay’s contribution to the city’s Art in Public Places program and her professional role as a mentor to artists locally and internationally, Mayor Steven Grant said.
“Please reconsider her firing,” said artist Barb Lentz, who owns the ArtSea Living Studio in Boynton Beach. Lentz was one of 13 artists who spoke at the webinar-style meeting.
Despite the pleas, the commission supported the city manager’s decision to fire Coles-Dobay and seek the resignation of Petty.
“Two prominent Black individuals were removed. One still lives in District 2 and has family here. I am offended,” Commissioner Christina Romelus said at the June 16 meeting. “I’m grateful for the work of Coles-Dobay in helping put us on the map for the arts. But erasing and defacing people is not an excuse.” Romelus is Haitian American.
“Debby Coles-Dobay became a close friend of mine when I entered the political world in 2007,” Commissioner Hay said. “It still boggles my mind — what was she thinking that this would not come out?”
The new fire station is part of the city’s ambitious Town Square project, estimated to cost $250 million. The city’s estimated share is $118 million. The station began operating on June 10 and provides service in east Boynton Beach and the barrier island towns of Ocean Ridge and Briny Breezes.
The city has announced that the new City Hall and Library building will open on July 7.