The Boynton Harbor Marina should be a waterfront destination, city officials contend.

And renovations designed to bring more people to the facility, which was purchased by the Community Redevelopment Agency in 2006, have begun.

Submerged pilings damaged in previous hurricanes have been repaired and the slips have been reconfigured: There are 19 slips now instead of 24, but they are larger, said CRA Executive Director Lisa Bright.

“We have several new boat captains who want to put bigger commercial fishing vessels in and this will allow boats up to about 50 feet to come here. We couldn’t handle boats that large before. Most of them were in the 32- to 35-foot range,” she said, adding that all of the slips have been rented and should be filled by the end of July.

The plan, she said, is for the facility to continue to be a “working marina,” with a 75 percent commercial and 25 percent private mix. Marina businesses include boats that offer fishing (including the landmark Sea Mist III charter), diving and snorkeling excursions. There’s also a dive shop, a boat rental facility and Two Georges, a popular waterfront restaurant. A website will be created for the businesses this summer to help them market their services, Bright said.

Boynton Beach Commissioner Steven Holzman said, “The goal of the marina project is to make the marina a more pedestrian-friendly location, to draw more visitors to the businesses located within the marina,” considered the east-end anchor for the city’s downtown.

Boynton Beach Mayor and CRA Board Chair Jose Rodriguez agrees, but he emphasizes, people have to know that the marina exists.

“It would be nice to drive down the street and see the marina and the restaurants. We lost that opportunity when the [Marina Village] towers were constructed. The marina hides behind those buildings,” he lamented. “We have to get signage up to let people know that it is there.” 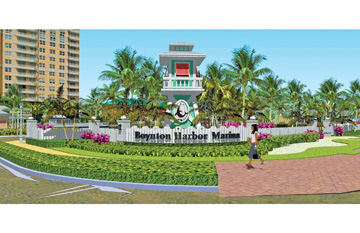 Those signs are in the works, including a signature Key West/Old Florida-style entryway on Ocean Avenue. The rendering, created by MSCW Inc., an Orlando-based design and community planning firm, depicts a pastel lighthouse-style structure surrounded by a white picket fence and lush landscaping.

“I think the new entryway will enhance the curb appeal and help draw visitors who may not have visited the marina previously,” Holzman said.

“The plans are incredible. I can’t wait to see how it all comes together,” said Jeannette Garnsey, part owner of the Sea Mist III, drift fishing operation located at the marina. “Anything that can increase business is a good thing.”

The $250,000 project could be completed by the end of the year, Bright estimated.

Future plans for the marina‘s $6 million renovation include a water taxi stop, reconfigured parking, relocation of fuel dock operations, construction of a dock office with a public restroom, a signature art feature and tropical landscaping. The project will take at least three years, Bright said.