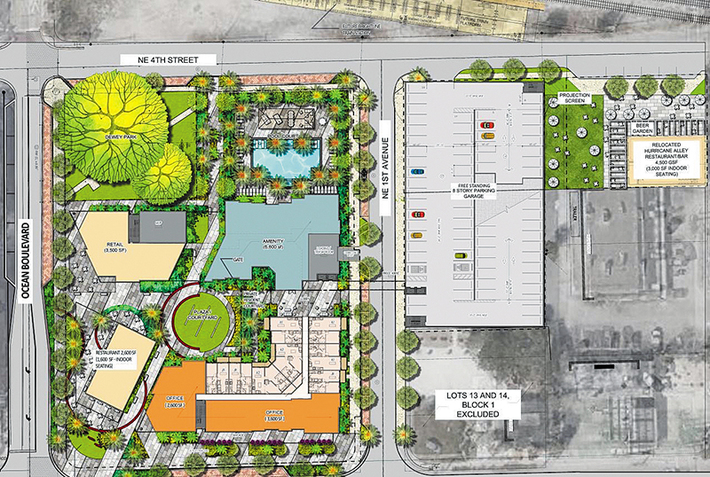 Preliminary plans for Affiliated Development’s eight-story, $73 million project in downtown Boynton Beach. The plan will be fine-tuned after details are worked out with the city and existing store owners. Rendering provided

The future of downtown Boynton Beach development has become clearer in the past few weeks with city approval of a $73 million mixed-use complex and of a new restaurant in and around a historic home, plus action aimed at building a new post office downtown.
The biggest of these projects will be Affiliated Development’s apartment and retail complex along the west side of Federal Highway south of Boynton Beach Boulevard.
The Boynton Beach Community Redevelopment Agency and the developer have agreed on two long-negotiated sticking points in Affiliated’s contract with the CRA.
Although a few details are still pending, the City Commission, serving as CRA board, on June 7 unanimously cleared the way for the project, which includes both affordable and market-rate apartments, restaurants, office, retail, a parking garage and green space.
Construction could begin as soon as 18 months from now, if the developer can quickly obtain the needed land use and land development approvals, Thuy Shutt, the CRA’s executive director, said after the meeting.
The plan provides a new home for Hurricane Alley, a popular bar and restaurant, on Northeast Fourth Street. The new site will have with an outdoor area, as well as 3,000 square feet of indoor seating, according to the plan.
Ace Hardware and other businesses in the area would not be affected, Shutt said.
The city and the Fort Lauderdale-based developer spent months hammering out compromises on the $5.5 million, below-market price Affiliated will pay for the land; on public spaces in the 545-space free-standing, multilevel parking garage; and the number of affordable apartments.
Under the almost-final agreement, the parking garage will provide 150 spaces — above those required by city code — for public use. If Affiliated needs more spaces (up to a maximum of 10), it must lease them from the CRA.
The developer also agreed to provide affordable rental apartment units with this breakdown: 50% (118 units) of the total 236 apartments will remain affordable for 15 years; 30% (about 70 units) will remain affordable for 30 years; and 5% (11 units) will remain affordable in perpetuity.

Plans for new post office
The CRA board voted at its June 14 meeting to seek proposals for a mixed-use commercial space at 401-411 E. Boynton Beach Blvd. that could serve as a new home for the downtown post office.
The existing building at this location, which is owned by the CRA, would be demolished. A newly constructed building would house the United States Post Office, currently at 217 N. Seacrest Blvd., on the first floor.
Other businesses — such as medical offices and/or a tourist information center — could be housed on other floors of a new building, Mayor Ty Penserga suggested.
“Let’s let the developer community come up with something creative,” the mayor said.
Meanwhile, the CRA is expected to acquire the building on North Seacrest in January from the current owners and then, possibly, extend the post office’s lease until a new location is available.
Rich Hancock, a spokesman for USPS, said the post office is committed to staying in downtown Boynton and would be amenable to a new space as long as it can provide 3,200 square feet of retail storefront space and at least 20 parking spaces.
“We are not looking to purchase anything,” Hancock said, but USPS hopes to lease space to establish a “long-term postal unit.”

Broadstone project
The impending construction of the Broadstone Boynton Beach, a 2.76-acre mixed-use complex at South Federal Highway and Southeast First Avenue, will displace 20 employee parking spaces for Two Georges Waterfront Grille.
Fernando Bonilla, of the developer Alliance Residential Co., asked the CRA board on June 14 to allow the temporary use of the CRA-owned parking lots at 115 N. Federal Highway to accommodate the employees.
Alliance was offering to lease the parking lots, but Penserga said he did not want to commit to the deal because it could mean depriving Hurricane Alley of parking spaces and it would be difficult for the city to police the lots.
“Public parking spaces are precious,” the mayor said, and suggested that Alliance approach other businesses for temporary spaces.
Construction on the eight-story Broadstone complex, with 274 multi-family units and ground floor commercial space, is expected to begin in September.

Pauline’s restaurant
The historic Oscar Magnuson house, at 211 E. Ocean Ave., is the future home of an American-style restaurant that will be open seven days a week.
Anthony Barber, the new owner of the site, told the City Commission on June 21 that he hopes to open in the next 18 months. He will renovate the two-story house, which was built in 1919, for inside dining.
More immediate, Barber said, he is planning to use big shipping containers for the kitchen area, walk-in food storage, restrooms, an artisan bar, and a rotisserie grilling area.
Barber, who owns Troy’s Barbeque in West Palm Beach and on Federal south of Woolbright Road in Boynton, said he has lived in Boynton Beach for 35 years and looks forward to opening a restaurant in his home city’s downtown.
“This project is very special to me,” Barber said, adding that he will name the restaurant Pauline’s, after his grandmother.
The restaurant will employ some 30 people, Barber said, and he will not seek a loan to finance the venture. Rodney Mayo of the Subculture Group has told the CRA he is providing $1 million in financial backing for Barber’s restaurant and the needed renovations.
“We’re partners in the restaurant as well as the property. We’re planning on going into the venture together,” Mayo said in December.
City commissioners unanimously gave preliminary approval to the restaurant.
“Thank you for investing in your city,” said Commissioner Thomas Turkin.
“Congratulations,” said Commissioner Woodrow Hay. “It’s high time we invested back in our own community — especially minority entrepreneurs like yourself.”