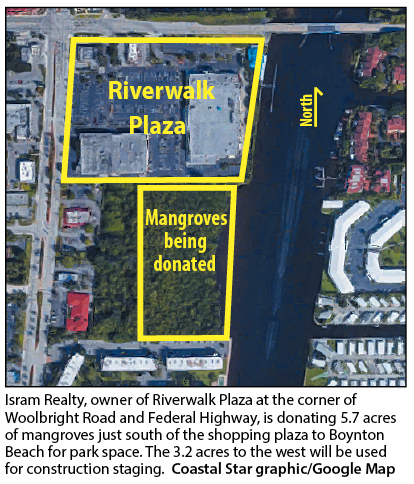 The Riverwalk Plaza owner is going through the approval process to donate 5.7 acres of mangroves, promised in March 2017, to Boynton Beach.
To make the donation, Isram Realty of Hallandale submitted a permit application in December to the U.S. Army Corps of Engineers, a federal agency that regulates land fronting the Intracoastal Waterway. The stated purpose of the permit was for “construction of a waterfront multifamily residence.”
The Corps mailed notices about the application to six nearby property owners in late January. Isram Realty is one of the six. But four of the remaining five said they never received the notice.
The lack of information has increased the tension between waterfront residents and Isram.
“We had to state the highest and best use of the land, that’s why it says ‘waterfront multifamily residence’ on the permit application,” said Shaul Rikman, Isram founder. “Maybe in 50 years, it could be developed.”
The mangrove parcel carries a multifamily zoning with a height limit of four stories or 45 feet, according to Michael Rumpf, the city’s planning and zoning director. He also said the city has not received any plans for the site.
“Nothing has changed [about the donated mangroves] since March 21, 2017,” said Rikman. “We are giving the city exactly what we promised.”
Isram plans to hold onto an adjacent interior 3.2-acre parcel along Federal Highway for construction staging of its proposed 10-story apartment complex in Riverwalk Plaza.
The Corps technically ended public comment for the application on Feb. 16, said Nakeir Nobles, Corps spokeswoman in Jacksonville. But the Corps can accept comments up until the time it makes a decision on the permit application, she said.
That date is not known, she said. The Corps is waiting on responses from the National Marine Fisheries, the Habitat Conservation Division, the Environmental Protection Agency and possibly the Corps’ regulatory archaeologist for potential historic property concerns, Nobles said.
“We are also awaiting the applicant’s response to a request for additional information,” she said.
Luke Therien, whose family owns the Prime Catch restaurant in Riverwalk Plaza, was on the notice list, but his company did not receive the notice. After reviewing Isram’s permit application on the Corps website, Therien said, “It seems reasonable to me. This is private property and Isram paid to get this property.
“I guess that the only thing one could argue is to work within the existing zoning codes.”
The mangrove donation was orchestrated by Commissioner Justin Katz as a way to make the project more palatable to the residents of the Seagate of Gulfstream condominiums. The 55-and-older community sits south of the mangroves.
Katz envisioned a boardwalk through the mangroves, ending at the northern border of Seagate.
But its residents don’t want a walkway, even if it is gated, because they can’t control who comes through, said Terry Owens, president of the Seagate condo board. They’re concerned about liability of their two waterfront swimming pools and break-ins, he said.
Seagate used to have an entrance into the mangroves to allow residents to go bird-watching, Owens said. But it is now locked because the condo community experienced break-ins, he said.
The board did not receive a written notice of the application, according to Owens. “Rikman came in late February to the Seagate clubhouse and talked generally about his plans to the Boynton Intracoastal Group meeting,” he said.
Deborah Corvey, co-owner of Boynton Billiards, and Steve Marouf, owner of the Troy’s Bar-Be-Que building on Federal Highway, said they also did not receive notices. Both properties are west of the parcels. The owner of the adjacent McDonald’s branch could not be reached.
After the mangroves are donated, Boynton Beach would maintain them, said Andrew Mack, the city’s development director. “This is similar to the existing mangrove park the city currently maintains,” he said. That park is along the Intracoastal Waterway just north of Boynton Beach Boulevard.
The Riverwalk project secured six extra stories after the city created transit-oriented development nodes at certain intersections along Federal Highway. City planners want to have the density to prepare for an anticipated Tri-Rail Coastal Link commuter line stop on the Florida East Coast train tracks. The Brightline express passenger rail uses the tracks but does not have a stop in the city.
Nearby residents had wanted only four stories for the former Winn-Dixie parcel. That was what had been allowed in the original zoning. Riverwalk Plaza sits at the southwestern base of the Woolbright Road bridge to the barrier island.