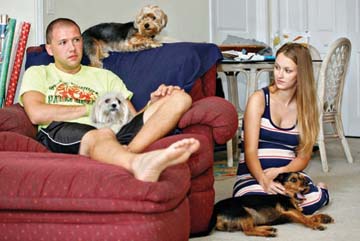 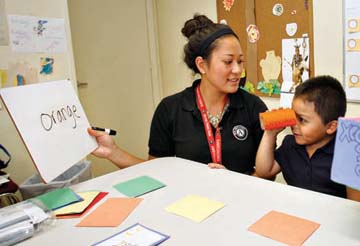 with Chalino Sanchez-Trejo, 5, at The Pines North in Delray Beach.

The next time you cross the Woolbright Road Bridge and a red light catches you at Federal Highway, use the moment to ponder that impressive apartment complex on the northwest corner of the intersection.

“Las Ventanas” — Spanish for “the windows.”

Earth tones and townhouses, apartments and lofts, private parking, pools and a spa. The sort of attractive development favored by trendy young professionals in search of a dynamic lifestyle — “Luxury Apartment Homes.”

But for 35 young men and women who inhabit 13 of those three-bedroom lofts overlooking the intersection, the luxury ends when they leave for work each morning.

To them, Las Ventanas is affectionately known as “the AmeriDorm”— home since 2009 to members of AmeriCorps, a domestic service organization patterned on the Peace Corps.

Locally, they work for Literacy AmeriCorps, a project of the Literacy Coalition of Palm Beach County.

From those luxury apartments, AmeriCorps members disperse each morning to 30-plus sites in Palm Beach County.

At In The Pines, two affordable housing developments for migrant workers in Delray Beach, they tutor children learning to read.

At Ed Venture Charter School in Hypoluxo, they teach students with severe cognitive and mental health deficits to prepare for job interviews.

At the Boynton Beach City Library, they help adults earn a high school diploma and children with their homework.

In other words, they didn’t do it for the money. The AmeriCorps group gathers at the end of a training session

at the Literacy Coalition of Palm Beach County.

“I love these guys,” says Audrey McDonough. “They’re full of life and idealism. It just recharges you, and every year you have a fresh new crew ready to go.”

If Literacy AmeriCorps has a den mother, it’s McDonough, the program’s director since it came to the Literacy Coalition in 1998.

In 2008, she got help when Brad Hertzberg, a former member here, was hired to help coordinate the program.

Together, they are responsible for hiring, assigning and supervising as many as 40 recent college graduates from about 20 to 25 states.

“If you’re gonna pack up and take a road trip across country to be in a new experience sight unseen,” she says, “you’ve already got some spunk.”

McDonough interviews and hires her applicants by phone, so just as they come here sight unseen, she also greets them sight unseen. She doesn’t actually see who she’s hired until they arrive.

And then Kevin walks through the door. If you’re assuming all AmeriCorps members look like the youth pastor at a Baptist Sunday school, meet Kevin Hovick.

“When he showed up,” McDonough recalls, choosing her words carefully, “his hair was … kind of long.”

Hovick, 23, of Hamden, Conn., has a degree in anthropology. He wears  beaded jewelry, prominent tattoos on both arms, and earlobes pierced and stretched with those painful-looking hoops you used to see only in National Geographic.

“I thought, ‘Well, now, where will he fit in?’ ” McDonough recalls.

Hovick wanted to tutor children. McDonough assigned him to the troubled teens at Ed Venture Charter School, and he hated it.

“I was very intimidated at first because I’m this small little white kid,” he says. “I didn’t think I had the skills.”

This is his second year there. The long hair is gone, but the earrings remain, and he loves the job.

Hovick spends his days tutoring students 15 to 22, who read at a fifth- or sixth-grade level, if that.

“I’ve had a student ask me if I was alive when Abraham Lincoln was president,” he says. “It can get frustrating, but it’s never boring. You just have to take your time and not rush things.”

In 1989, Jerry and Donna Goray of Ocean Ridge founded the Farmworker Children’s Council, the outgrowth of a church project that now provides housing and educational services at two In The Pines developments in Delray Beach.

This year, Courtney Cambra, 23, of Carlsbad, Calif., a graduate in special education, spends her afternoons at In The Pines North on Hagen Ranch Road, tutoring children whose parents speak little or no English.

“We’ve had AmeriCorps here for 10 years,” Goray says. “They’ve all been good, but Courtney’s the most outstanding.”

Today, she’s working with two boys, Chalino and Michel, 5 and 6, so shy they speak in a whisper.

“I have one student here whose focus is so scattered he’ll look at the first letter, and if the word is ‘maybe,’ he’ll guess ‘make.’

“But I love it,” she quickly adds. “What’s frustrating is when I don’t know if I’m doing enough to help them.”

On a recent Sunday morning, Michael Owen, 27, of West Liberty, Iowa, relaxed in his third floor loft, reflecting on life in the AmeriDorm and what it’s like to live on $12,100 a year.

Each AmeriCorps member pays $450 a month rent toward the three-bedroom lofts, he explained. After that, they get creative.

“Food stamps is a life saver,” Owen said, “and you learn how to cook.”

Some roommates pool their $200 in monthly food stamps to make sure one apartment isn’t supporting three bottles of ketchup.

Bar Louie has $1 burgers on Tuesday nights, and Tijuana Flats has Taco Tuesdays. It’s $6 for a movie at the Boynton Cinemark on Tuesdays and at the Alco Cinema on Military Trail on Thursdays.

Owen works a part-time job tutoring after work, and so does Courtney Carma.

Kevin Hovick and Leah Levy work nights at Delivery Dudes. On a good night, they can make $170 in tips.

They call it the AmeriDorm, but in fact, there isn’t a lot of socializing.

If AmeriCorps members see each other in a group, it’s probably during the weekends, when they might walk over the bridge to relax on the beach at Ocean Ridge.

“I’m a jogger, so I love the beach,” says Cathy Hentschel, 23, of Plainfield, Pa. “I’ll jog over the bridge and take a walk on the beach and then jog back.”

Most of the time, though, they’re all too busy to hang out.

“Kevin and I are roommates,” says Ithran Kaoyton, 24, of Detroit, a graduation coach at Lake Worth High School, “and we might see each other five minutes a day.

“We call it our five minutes of fame.” works with adults at the Boynton Beach City Library

to help them prepare for their GED tests.

While Kevin Hovick teaches the teenagers in one room at Ed Venture, Owen is in another, using a Sam’s Club website to try to teach “money math.”

Two-for-the-price-of-one isn’t necessarily a good deal when another product costs a bit more but offers more content, he points out. But if the handful of students in class understand, it doesn’t register on their faces.

Owen is teaching them how to cope with supermarkets, live within a budget, plan a party, rent an apartment.

And they are teaching him patience.

When he leaves Ed Venture, Owen heads over to the Boynton Beach City Library, where Cathy Hentschel spends five hours a day helping children from area elementary schools with their homework.

“I love my kids,” she says. “I couldn’t imagine them with someone else.”

Noah buys a pencil. He uses one quarter and two nickels to pay. How much does the pencil cost?

As she coaches a first-grader through the problem, Owen slips into another chair at the table and welcomes the next child.

His workday is over. This is not his part-time job. He does this because he wants to.

Meanwhile, in a conference room just off the library’s lobby, Aman Kaur, 22, of Parsippany, N.J., is helping four adults prepare for their GED tests.

This is Thursday, and the four adults are seated at the table, reading very simple books about Charles Lindbergh and Eleanor Roosevelt, Ellis Island and Sept. 11.

Ask what they think of their teacher and you’ll hear the real value of Literacy AmeriCorps.

“She’s great,” he says, then reconsiders. “No, she’s more than great. She’s wonderful.”

Criselda Desir, 41, cleans houses. “We have a very intelligent teacher, so if you’re a good listener you will learn. I’ve learned that money math is the most important kind of math.”

Adeline Roger, 52, worked as a cook but dreams of becoming a home health aide.

“I learned that zero is a real number,” she says, and her voice swells with wonder. “I thought zero was just zero, but I learned that a 1 with a single zero after it is 10, but 1 with three zeros is 1,000. Zeros are not nothing! Zeros matter!”

“This beautiful lady here” — she gestures reverently toward the teacher, 52 years her junior — “she takes her time if you don’t understand, and she’s helped me so, so much.

“She is the mother, and I am the child.”

Two Saturdays a month, each of the AmeriCorps members is also required to perform community service work as part of their annual responsibilities.

You’ll find them at Habitat For Humanity or the United Way, the Community Caring Center or Special Olympics.

On April 12, for example, while Michael Owen and nine other members helped out at the West Palm Beach Public Library, Kevin Hovick and colleagues were weeding and mulching a community garden at Cason Community Church in Delray Beach.

When his AmeriCorps year here ends on July 11, Michael Owen will join the Peace Corps in Colombia.

Courtney Carma has applied to the Peace Corps, too, but is also considering another AmeriCorps program, working with the mentally disabled in Pennsylvania.

And Kevin Hovick, who volunteers with the Special Olympics every Monday after work, is taking an online course in therapeutic recreation through the University of Milwaukee.

Take a moment to ponder all this the next time a red light catches you by the AmeriDorm at Woolbright Road and Federal Highway.

And when at last the light turns green and you drive on, try not to feel a little better about the younger generation.

In 1993, Congress established the Corporation for National and Community Service to manage three main programs: the Social Innovation Fund, Senior Corps and AmeriCorps.

In Florida, more than 16,000 people are serving in CNCS programs. About 14,000 are with Senior Corps, while 2,359 are at 88 AmeriCorps programs throughout the state, including the 39 young men and women working with the Palm Beach County Literacy Coalition.

“The federal money is distributed through Volunteer Florida, which pays about 60 percent of our $800,000 annual budget,” says Audrey McDonough, director of the Literacy Coalition’s AmeriCorps project.

The remaining 40 percent comes from grants and a $5,700 fee each service site pays to employ an AmeriCorps member.

At the Boynton Beach City Library, for example, two AmeriCorps members cost the library $11,400 a year. However, one of those members is sponsored by the Friends of the Library through its used book sales.

Monday through Thursday they are at their service sites, while Fridays are reserved for training at the Literacy Coalition headquarters on Quantum Boulevard.

In addition, all members who complete the 1,700 service hours receive a $5,550 “education award,” which can be used toward college tuition or to pay off student loans. If the member leaves early, the entire award is forfeited.