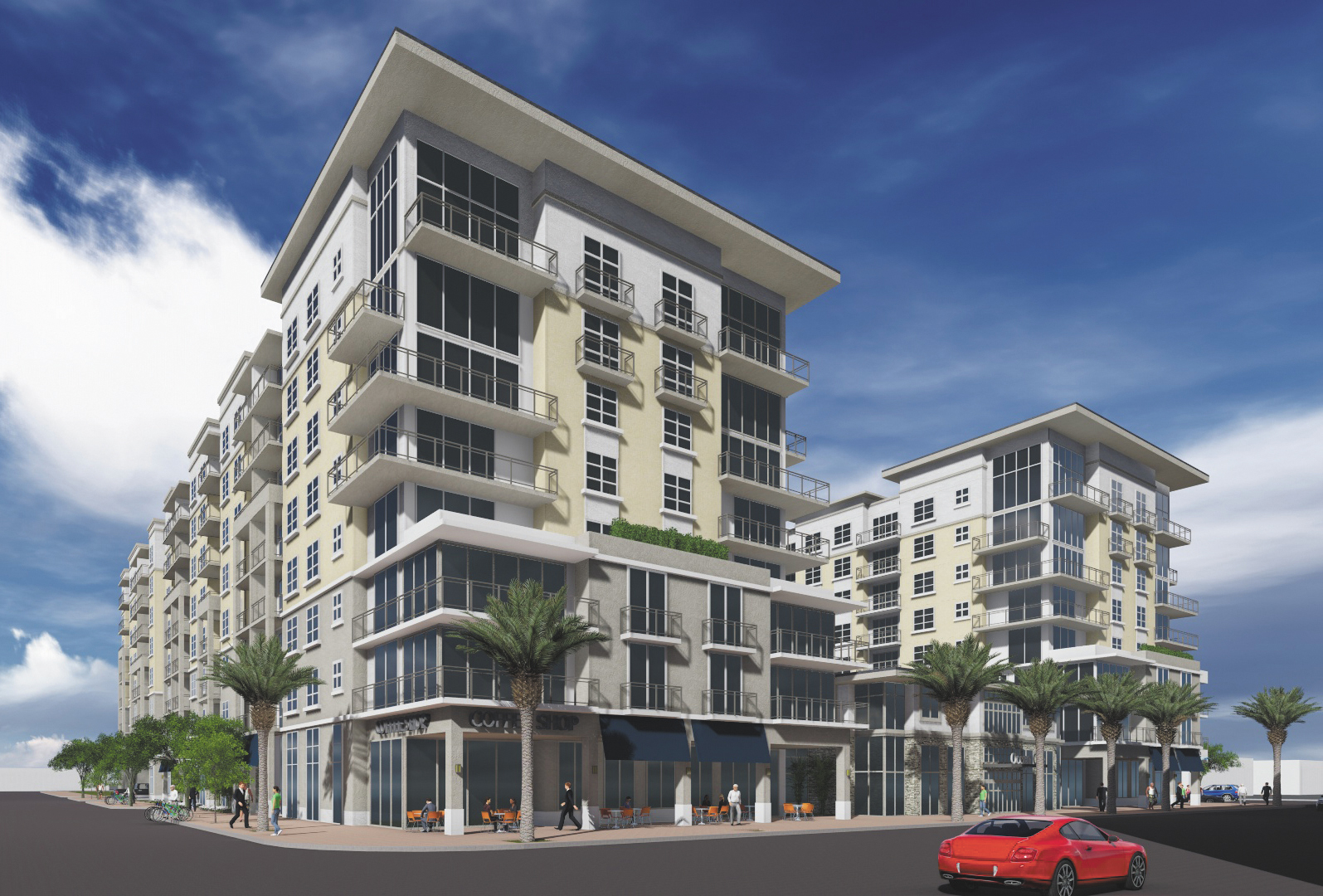 The developers envision 237 units ranging from studio to two-bedroom apartments.

Boynton Beach city staff can begin reviewing plans for the Ocean One project after its Community Redevelopment Agency board gave the executive director approval in mid-May to sign off on needed land for the eight-story apartment complex.
“They submitted an application to the city (in early March), but it could not be processed without a signature for the CRA land,” said Vivian Brooks, CRA executive director. “It’s been sitting on the shelf, not being reviewed.”
The agency owns 0.47 acre that investor Davis Camalier wants to combine with land he owns to create a 1.98-acre parcel to build the horseshoe-shaped apartment project at the southeast corner of Boynton Beach Boulevard and Federal Highway.
His land use attorney, Bonnie Miskel, wrote to the CRA in early March that land costs to assemble the property were higher than realized. Camalier is requesting the CRA piece at the nominal price of $10, Miskel wrote. A Dec. 30 appraisal valued that land at $460,000, below the county property appraiser’s 2015 market value of $532,716.
The CRA advertised the land. When no one offered to buy it within 30 days, the property was designated to go to Camalier’s group.
Ocean One plans to have 237 apartments, varying in size from 560-square-foot studios to 1,600-square-foot, two-bedroom, two-bath units. The most common configuration — one-bedroom, one-bath units with a den — has 875 square feet. Ocean One has 50 of these spread among all floors.
A six-story parking garage behind the building will have space for 311 vehicles, including 36 guest parking spaces, and another six spaces will be on the street. Boynton Beach code requires 391 parking spaces for the 237 apartments.
A separate parking study to justify the reduction was submitted in early March, said Bill Morris, development partner in Ocean One. The study is based on the Worthing Place project in Delray Beach. Morris, a developer on that project, says it has similar parking needs to Ocean One.
The delay in reviewing the plans won’t hamper Ocean One’s schedule, Morris said. The  developer still hopes to break ground in October; construction will take about 18 months, with tenants moving in April 2018.
At the Boynton Beach City Commission meeting on May 3, the CRA board was added to an ordinance that allows its advisory board to review the CRA agenda and anything else the commission wants the advisory board to do. The commission set up the advisory board last fall to allow citizen input after two community members were ousted from the CRA board.
On May 4, advisory board member Brian Edwards resigned. In his memo to the City Commission, which sits as the CRA board, Edwards called the advisory board “a waste of CRA staff time and only a Band-Aid for citizens who want input.” The CRA staff prepares the CRA agenda a week earlier so that the advisory board can review it the Thursday before the CRA board meeting.

Willie Howard contributed to this story.